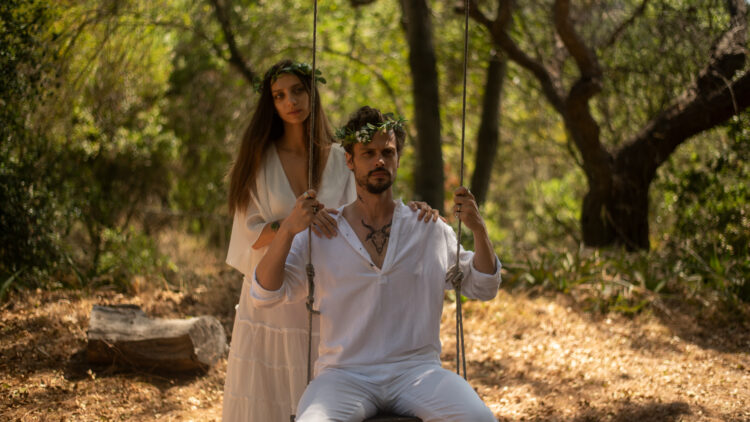 There is something about Richard Bates, Jr.’s incredibly dark sense of humor and representation of the misfits of the world seen in his films that really appeals to me. I relate to AnnaLynne McCord’s painfully misunderstood Pauline in Excision (2012). In fact, I’m that weirdo that considers Excision one of my go-to comfort movies. Bates’ 2014 film Suburban Gothic isn’t as traumatizing as Excision, but it still has some bleak moments. His third film, Trash Fire (2016), returned to the disturbing subject matter the brilliant indie genre filmmaker has become known for, while 2019’s Tone-Deaf featured a battle to the death between a millennial and a boomer.

Richard Bates, Jr.’s newest film, the magical horror comedy King Knight, which he wrote and directed, is having its World Premiere at this year’s Fantasia International Film Festival. Surprisingly, the film has a much lighter tone than his previous work. Starring Matthew Gray Gubler (Suburban Gothic), Ray Wise (Twin Peaks), and the voice of AnnaLynne McCord (Excision), all of whom you will recognize from Bates’ first three films, King Knight tells the story of Thorn and Willow, a couple who lead a quirky coven of witches.

Dread Central was thrilled to have the opportunity to talk with Richard Bates, Jr. about presenting Wicca in a positive light in King Knight, working with the insanely talented ensemble cast, and a lot more. Read on to find out what we talked about!

King Knight will have its World Premiere at Fantasia International Film Festival on August 8, 2021.

Synopsis: King Knight is an outsider’s comedy starring Matthew Gray Gubler and Angela Sarafyan as Thorn and Willow, husband-and-wife high priest and priestess of a coven of witches in a small California community. When Willow unearths a secret from Thorn’s past, their lives are thrown into turmoil in this kooky, clever treat, decked with a wild cast that includes Nelson Franklin, Johnny Pemberton, Barbara Crampton, Ray Wise, Andy Milonakis, and the voices of Aubrey Plaza and AnnaLynne McCord.

Dread Central: You wrote and directed King Knight, which is having its World Premiere at Fantasia. It’s such a unique story and very different from your previous films and I wondered if there was something that inspired you to write this story?

Richard Bates, Jr.: After Tone Deaf, I was figuring out what to do next and I decided that I needed to make something that would make me happy. The idea was, I would write a movie I would want to see and then I would make it. I’m not going to ask for anyone’s help or try to pitch this. I would make a movie the way we used to make movies when we were kids and it’s going to be fun and I’m going to feel like I’m in my parents’ backyard. I had witches on my mind because someone had pitched a horror movie to me about witches. I realized I love witches and I didn’t want to make a movie about evil witches because every witch I know is lovely [laughs]. So, our protagonist would be witches.

A lot of times when I make a movie, they all take place in a sort of heightened version of reality and for King Knight we take a farcical approach to reality as well, but the difference is, I made sure that I approached every single character without cynicism. I would even second guess myself and make sure that I loved that person when I was writing them, so that was very important.

DC: This film is a parody, but also an accurate portrayal, of religion, conservatives, and society in general. I love the scene where Thorn’s mother, played hilariously by Barbara Crampton, tells him he doesn’t go outside because he might burst into flames Why did you choose to use a coven as the main setting for the story, and did you do any research on Wicca or Paganism for the movie?

RBJ: Tons and tons of research, but I’ve kind of been doing it for years. If you ask any of my friends, about half my library is books on witchcraft. I started in film school when one of the first documentaries I made was on this pagan store in Manhattan. I grew up with a lot of family members that were Southern Baptist, so the whole idea of witchcraft would be evil. I gravitated towards Wicca just because it speaks to me more than any other religion that I’ve ever come across.

So, the whole notion of treating these characters as not evil, as the way you would treat any sort of characters in a comedy, really appealed to me because if I were to try and make them perfect, then I’m preaching to people, telling them witches are perfect. Then I’m doing the thing I don’t want to do, but if I try to treat them with love, but I still make them fun, exciting, goofy characters in a farce, then people will be so much more open to falling for them and not judging them in the wrong way. The last thing I want to do is preach; I want to sort of change minds without doing that. I don’t think people like being told how to think anymore anyway.

DC: In the film, Willow finds out that Thorn has been lying to her about his childhood. He’s covered in Satanic tattoos and dresses in black, but he had a pretty conventional upbringing and Willow is horrified by that. You have a habit of telling stories about misfits and how they are mistreated by society. Why do you enjoy poking fun at society and mainstream ideology?

RBJ: I think it’s sort of the duty of every artist to do that. The amount of work it takes to make a movie, especially a small movie, I need a reason that’s more than I’m going to distract someone for an hour and thirty minutes. To give myself purpose, and the movie purpose, I have to latch onto something that I think needs to be addressed, or should be poked fun at, or minds need to be changed, things like that.

With all that’s been going on, the idea was sort of I can start off showing these witches that are almost alien to a lot of people in the United States, and then by the end, they will see that they’re humans, and that quite frankly, regardless of whatever religion you subscribe to, we are all searching for the exact same answers to the exact same questions. So, that gave me a reason to get out of bed and do it.

DC: Your previous films show what it’s like to be an outsider, or a weirdo, and go to some really dark places. I’m surprised King Knight isn’t dark and traumatizing like your previous work. Why did you decide to make a movie with a much lighter tone than what we’re used to seeing from you?

RBJ: With everything going on politically and socially, I didn’t feel like hurting anyone, and it was kind of healing for myself. When I make a movie, I am in it, I am in that world until it is done. Almost like an actor. I wanted to be happy, and I wanted to make other people happy. I love horror films more than anything [laughs]. I’m no stranger to killing people on screen, and I will again, but I didn’t feel like killing anybody. And that makes it harder for me to find financing. When my movies get pitched and go out, it’s typically the producers that are interested in horror, and I still made this for the horror community, I am the horror community.

So, my feeling was, if I made a movie for myself, it would hopefully speak to the people that the other films have spoken to as well. It’s just going to be more of a confection, like a nice escape, but with something a little extra to latch onto, and hopefully make a few kids’ days. When you make a movie it’s strange; some people are going to really like it; some people are going to really hate it; but then there’s going to be a few that it really means a lot to. And they’re going to watch it over and over again and that gives me so much purpose. That’s like the sweet spot.

DC: This cast is amazing! I mentioned Barbara Crampton and the film also stars Ray Wise and Matthew Gray Gubler and the voice of AnnaLynne McCord, who you’ve worked with a lot on previous films, as well as Angela Sarafyan. What was it like working with such an outstanding group of actors?And what do you enjoy most about working with Ray Wise, Matthew Gray Gubler, and AnnaLynne McCord, who have been in almost all your movies?

RBJ: When you direct a movie, you get a good say in the cast, but you don’t have final say about everything. The fun of this was, I got to make sure every single person in the movie was exactly who I wanted. I even personally negotiated the deals and the actors’ contracts with their agents, so I was the casting director, too. I did that because it’s all about the characters, it’s an ensemble movie and they’re our special effects really. So, that was really important to me and that’s sort of the fun and the joy of doing something like this.

I had Johnny Pemberton back, I’d always wanted to work with Josh Fadem, Nelson Franklin went to college with me, and he was in all my short films. I had Ronnie Gene Blevins, Shane Brady, I was so happy to get him a role that was a little bit bigger because I had to cut him out of Trash Fire, Swati Kapila is an amazing actress and I had been hoping to get her in a role for a while now.

And I got Barbara Crampton, I mean Re-Animator is one of my favorite movies, so that was the coolest thing ever. I didn’t know her, and I called her, and she was totally down to do it, and now I’ve grown very close to her and I love her and she’s so nice and so cool. Ray Wise is kind of like a hero. I called Ray and I said, “Ray, who on earth doesn’t want to see you as Merlin?” And Ray paused and in all seriousness he said, “You know something, Rick? I’d like to see that myself.” And then he did it.

And Angela Sarafyan is incredible. I love Westworld and I couldn’t find the right Willow. I was struggling and Josh Fadem recommended her, and I knew who she was, and she was just perfect because she’s this brilliant dramatic actress. The whole approach to the movie is that no matter how ludicrous or silly something is, you have to treat it completely serious. The goal throughout was for everyone to approach things as if they’re acting in Sophie’s Choice rather than a comedy.

As far as Matthew Gray Gubler and Ray Wise and AnnaLynne McCord, it’s so much more fun to make a movie with people who you’re friends with, and who you know are good, and you know what to expect. My dream growing up was always to work in a circus, so I’ve slowly been trying to put together a circus, if that makes any sense, and I would say they’re certified circus members. They’ve walked the tightrope and passed the test.