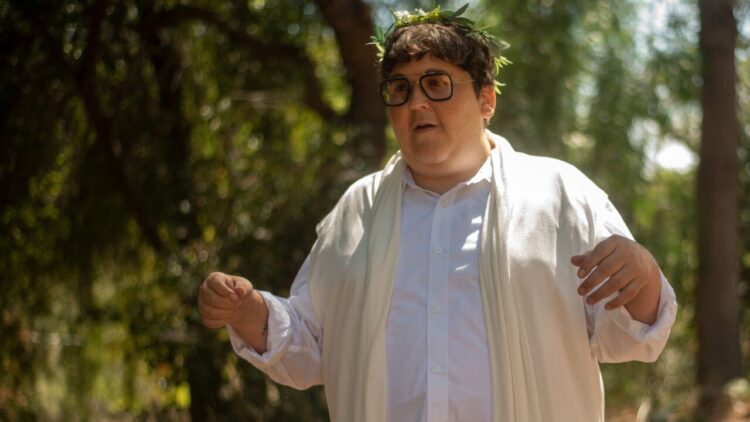 Andy Milonakis made a name for himself in 2005 with the MTV series, The Andy Milonakis Show. The program was hilarious, bizarre, and way ahead of its time. His knack for sketch comedy and ability to create punchy, easily digestible content before the term ‘viral video’ was even coined makes him something of a juggernaut. Milonakis has parlayed his two-season comedy series into a lasting career in the entertainment industry. His latest venture, a supporting role in Richard Bates Jr’s King Knight reminded me exactly why I fell in love with his brand of humor more than fifteen-years ago.

Ahead of the Fantasia Fest premiere of King Knight, I spoke with the comedian and actor about his character in the film, finding the humor in what makes us uncomfortable, and why audiences love obscure references in cinema.

But before we get started, I’d like to take a moment to remember a few lines from the genius final verse of the intro to Andy’s MTV series: 🎵 So, yo I gotta go, it’s time for me to rock it. I put bologna in my left pocket. Smear some cream cheese in my gold locket. Cause it’s my show I’m Andy Milonakis. 🎵

Dread Central: This feels a lot like a film that you were destined to be in. And by that, I mean that it’s in sync with the kind of humor you’re well known for. At what point in the script-reading process, did you know you were in?

Andy Milonakis: [Laughs] I’ve always liked independent films and I really like dark comedy stuff that is delivered seriously but everybody realizes it’s ridiculous and a joke. I never really get to be in movies like that. And when I saw that opportunity, I knew I would love to do it. It was a chance to deliver everything seriously in a creepy-ass weird movie.

Dread Central: I think you’re great in it. You leaned into the silliness of it all. It feels like the role and the film were tailor made for you. I mean, the talking rocks… It feels right up your alley.

Andy Milonakis: Yeah, I don’t think it was written for me. But they just reached out to me. I am in Greece now. I was in Greece two years ago during the time where they were starting production and I was on some island and I was like, ‘Oh, man. I gotta cut my trip short in order to be in it.’ So, I really wanted to make sure it was something I wanted to do because it meant having to leave early and I was having so much fun there. My family is there.  But I was like, ‘You know what? It’s worth leaving early.’ Being in a movie isn’t something I get to do every day. So, I felt like I had to take them up on it.

Dread Central: Your character has a hilarious backstory. Particularly the bit about distrusting authority because you caught your middle school class treasurer misappropriating funds. Is there anything about your character or his origin story that you brought to the table or was that all in the script when you got to it?

Andy Milonakis: Not exactly. But I was a complete f*ck up in school. I was an anti-establishment type person. Not quite nail on the head or anything. But I definitely was the person who said ‘f*ck school’ and skipped class to do computer stuff. I would flunk out of almost every class and I ended up dropping out in eleventh grade.

Dread Central: I had no idea. That’s interesting to hear.

So much of the comedy in the film comes from awkward situations. As someone who has made a name for himself finding humor in the uncomfortable, I’d love to hear your input on how you strike the right balance between awkward and hilarious and get it to translate to the screen in a way people can relate to.

Andy Milonakis: I think there’s two parts to that. It might be obvious. But definitely, the writing. If it’s too jokey, it’s not gonna play. You have to really commit to the seriousness of it in both dialogue and acting. If you’re kind of mugging to the camera and delivering a line where you’re not really committing to the seriousness of the scene, I think you don’t have it. But if you really go balls-to-the-wall with that in the writing and the acting, I think you have something special.

Dread Central: Thanks for elaborating on that. I love hearing people I admire open up about their creative process. So, it’s a pleasure to hear your response to that.

Dread Central: Something that stood out to me that I think may resonate with a lot of fans of the film was the fixation with Juliette Binoche. I thought that was such a funny and quirky nuance. Did Richard ever mention where the idea for that bit came from? Or was it something that materialized during production?

Andy Milonakis: I think it was scripted like that from the beginning. I don’t know. I think people really like obscure, weird references. Just out of left field. Like, what? What the f*ck is this about? I didn’t have a history of knowing the early versions of the script because they cast me and said they needed me to come back from Greece a week early if I wanted to be in the movie. I got back just in time and I had a quick little meeting with Richard [Bates Jr.] about the script when I got there. And two days later I was on set.

Dread Central: When I was prepping for this interview, I was thinking how hard it would be to give an elevator pitch for this film. It’s not really a horror movie. It’s not strictly comedy. It ties in to many different genres. How do you describe it when you’re explaining it to someone for the first time?

Andy Milonakis: I don’t know if you’d just consider it a dark comedy. It’s hard to wrap up movies that have such a weird vibe. There are a lot of independent films out there that are kind of weird and absurd. But every one of them is different. So, it’s kind of hard to wrap it up.

You didn’t really ask me this but it’s kind of interesting because when you do a straight comedy, you can tell what is working and when the laughs are coming in. You can see how it plays out. I feel like it’s a really difficult thing. It’s kind of crazy because you can’t really tell how it’s gonna play until you edit it. All the weird, serious dialogue, and then you edit it with the music and cut the scenes… It’s kind of like baking. You don’t know how it’s gonna turn out until it’s done. You can’t really get a preview of if it’s gonna be good or not. Sorry for the food references but if you’re sauteing some spinach and adding some salt to taste, you can taste it along the way. But with something with such an odd tone, you have to hope it turns out good when you pull it out of the oven.

Dread Central: Well, I think it came together. Thank you so much.