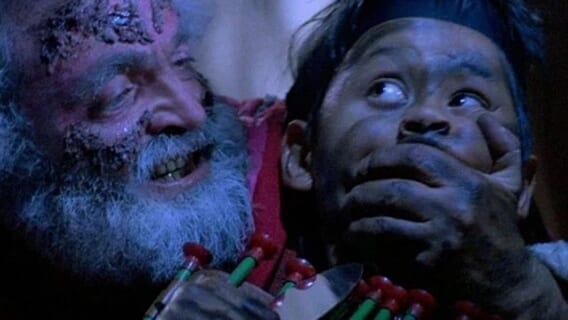 Dial Code Santa Claus (a.k.a. Deadly Games) comes from a bygone cinematic era when latch-key kids ran amok and were left unsupervised to fly spaceships (Flight of the Navigator), keep national secrets from falling into the hands of terrorists (Cloak & Dagger), and take down murderous cults (Young Sherlock Holmes). That time period produced so many magical efforts that hold a special place in my heart to this day. So, when a film like Dial Code Santa Claus emerges from obscurity (roughly 30 years after its 1989 release) and becomes available to stateside audiences, I am always hopeful that I will be transported back to the ‘80s when absentee parenting was the order of the day. And Dial Code Santa Claus has that exact effect on me.

On Christmas Eve, young Tommy (Alain Lalanne) hopes to stay awake late enough to meet Santa Claus. Instead, the precocious lad meets a disgruntled department store Santa with an axe to grind (Patrick Floersheim). Luckily, Tommy has a very particular set of skills that enable him to defend his family’s palatial estate against the uninvited guest.

This relic from a bygone era would likely never be greenlit today. And while that’s a damn shame, it also makes unearthed films from the cinematic time period where unaccompanied minors ruled the YA landscape (which began in the early ‘80s and ran into the early ‘90s) that much more noteworthy.

One facet of what makes Dial Code Santa Claus work is the relationship Tommy has with his grandfather. It’s quite touching and serves to make both Tommy and Papy relatable. Tommy’s grandpa is such a good sport, allowing his rambunctious grandson to handcuff him, wake him up by screaming over the estate’s intercom system, and even being a good enough sport to play a D&D-esque roleplaying game with the boy. I had a grandfather that went along with many of my whims and seeing that dynamic here really warms my heart and makes the movie special.

Though he is a fantastic grandparent and playmate, Papy isn’t able to offer much help to Tommy as the tenacious lad fights to defend their home. Papy is diabetic, nearly blind, and of advanced age. And seeing as Tommy’s mother is a busy executive working late on Christmas Eve, Tommy is all on his own. But that distinction serves to raise the stakes and make the action all the more intense.

While there is plenty of action on display here, one must be able to suspend their disbelief to truly enjoy Dial Code Santa Claus. It’s far-fetched in almost every way imaginable. The traps and secret passageways that Tommy builds throughout his house are far too advanced and intricate to have been built by even the most intelligent of tots. And that’s far from the only questionable aspect of the narrative. But if you can set that aside and watch through the eyes of a child, Dial Code Santa Claus is an awful lot of fun.

On the subject of suspending disbelief, Tommy is portrayed as something of a junior John McClane. He has the inexplicable ability to defend his house like a seasoned member of a black ops squad. To be clear, I’m not just talking about Kevin McCallister-style booby traps. He is more like the long-lost son of John Rambo than a mere child. And that piece isn’t very well supported by the narrative. However, this is the kind of movie that wants you to turn off your brain and enjoy. So, if you are capable of doing just that, you should find plenty to love about this flick. And considering the action sequences are a mixture of the slapstick energy of Home Alone crossed with the tactical maneuvers of Die Hard, there is an awful lot to appreciate about Deadly Games.

If you are curious to check out this all-but-forgotten effort, Dial Code Santa Claus is currently available to stream on Shudder. It was also given the physical media treatment from the fine folks at Vinegar Syndrome.