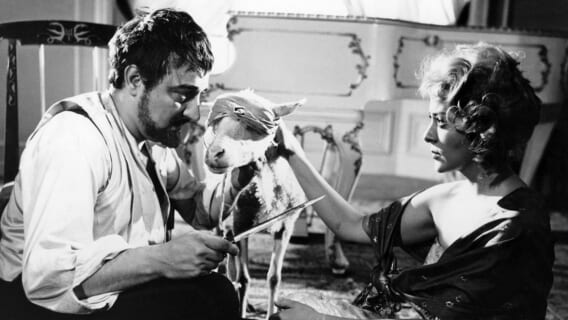 According to the Oxford Dictionary, the term bourgeoisie refers to the capitalist class who own most of society’s wealth and means of production. In other words, the one percent. Given that this term is of French descent, it seems fitting as it’s usually associated with Spanish-Mexican director Luis Buñuel. The relationship between Luis Buñuel and this term isn’t because he’s a part of the upper class. Rather, Buñuel is known for attacking the rich alongside religion in the majority of his films.

It’s important to note that Buñuel has had three major eras in his career that are each connected to the country he was living in: Spain, France, and Mexico. While living in each country, there’s a recurring theme that runs through most of his films: Buñuel’s critique of the rich and religion. As a director living in a foreign country, he looks in on the problems around him. This is how he managed to make one of the most important Mexican films in 1950 titled Los Olvidados (The Young and the Damned). The film showcases extreme poverty and violence among children from Mexico City. Ten years later he attacks the people who are a part of the problem in The Exterminating Angel.

The premise of the film is fairly simple compared to modern standards. High-class individuals are trapped within a room with an unknown entity preventing them from leaving. While the film lies more within surrealist fantasy, the premise just screams horror. Take a look at other claustrophobic horror films such as The Descent, The Thing, and [REC]. These are all horror films in different settings with essentially the same premise: no one can leave due to an external force.

What Buñuel does here is set up a horror film as he gathers a full cast of prestigious Mexican actors of that time such as Claudio Brooks, Silvia Pinal, and Augusto Benedico. Within the 95-minute runtime, we witness these respectable and elegant actors fall into insanity, conflict, and violence.

While the film may seem straightforward, Buñuel’s vision turns complex with one factor: the implementation of repetition. There are many instances where the story intentionally repeats itself, whether it be the recreation of specific scenes or pieces of dialogue spoken over and over again. This is all used to critique the social rituals of the elite.

The characters in The Exterminating Angel wouldn’t even be in the story’s predicament if they didn’t appear at another elite gathering due to obligation. One of the most obvious sequences of repetition is at the beginning of the film when the ensemble cast enters the mansion. The scene is then repeated, only it’s shown at a slightly higher camera angle. Upon my first viewing, I just assumed this was a mistake left in by the editor. But, I had no idea I was about to enter the world of Buñuel’s surrealist films. As The Exterminating Angel progressed and the other 20-plus instances of repetition occurred, the intentionality of it all seemed clear.

Repetition is integral to the story and not just used as a hypnotic flair. It’s used to show how routine confines the upper class. The bourgeoisie trapped themselves in that room and they didn’t even know it. There are multiple shots within the film where the camera is placed on the opposite side of the dark dining room. The visitors are seen trapped within the room slowly pacing around the door frame. As they wonder what invisible entity is keeping them in, the deterioration of the bourgeoisie takes over.

As the room begins to disintegrate so do the minds of the characters present. Buñuel does a great job portraying social etiquette the bourgeoisie still try to follow even in a time of peril by keeping their fake fondness towards each other. Each character is given a small amount of screen time to showcase this. As hunger rises and patience dwindles we see how quickly this group of people turn on each other versus the “community” they insist is genuine.

For example, courteous attitudes when handing over the one brush available with a Pan Am smile are contradicted by a snob comment to whoever is close by. What first begins as a vocal outburst against their distaste for each other quickly evolves into manic panic and violence. The sheer brutality of man is put on a pedestal.

Buñuel contradicts this with a tame black bear. While in the midst of destruction caused by humanity, this peaceful bear, who is typically seen as barbaric and savage, is minding his own business. It walks among the destruction caused by the upper class. It never once looks at them or even acknowledges their presence.

On top of this, there are plenty of layers that attack organized religion. This is done in typical Buñuelian fashion. His past Mexican films are overt in their critique with a 1950’s Christ-alike priest in Nazarin and a fight between a religious man and the devil in Simon of the Desert. The Exterminating Angel is no different. The film’s opening image is of a Catholic Church with the bells constantly ringing. Not only does this give an ominous atmosphere, but Buñuel is also already making a correlation between religion and the rich, and how societal rituals and fake communities are intrinsically linked.

Buñuel also uses the bizarre scenario to show how people in fear resort to religion. This is why when all hope is lost some of the members look towards the luckiness in chicken feet. It’s no coincidence that The Virgin, also known as The Valkyrie played by Silvia Pinal, is the one who comes to their rescue. This can be seen as a prototype of the death-by-sex horror trope made popular in slasher films of the 1980s. There’s nothing but pure religious beliefs behind this “final girl” who helps the rest of the characters and herself escape.

The final scene of the film showcases Bunuel’s creative style of repetition. We see all the remaining bourgeoisie characters front and center in a mass. They’re quiet, shaken, and resorting to religion after their ordeal. But the external force isn’t easy to get away from. The same premise ensues but this time in a church. None of the members including the priest have the will to leave. Our final image is the herd of sheep running into the church and the bells ringing, just like in the film’s opening. The film is now in a full loop just like the characters.

If you have never seen a film by Buñuel, this would be a great entry point. It’s straightforward while also utilizing surrealist imagery. By the time Buñuel entered his French era of filmmaking, the surrealist traits were in full swing. His films became more abstract and with it, that era became more difficult to decipher. But The Exterminating Angel’s simplicity leaves plenty of space to interact with the film and enjoy the downfall of the bourgeoisie and organized religion.