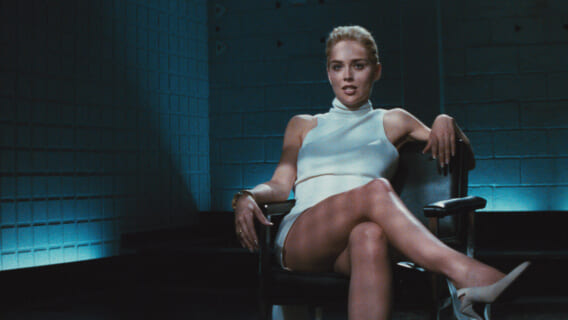 Welcome to Terror on the Turntable! In this monthly column, join Rachel Reeves as she explores the powerful and unholy alliance between horror films and their scores. Covering only scores released on vinyl, it’s a conversation about the intersection of music theory, composer style, film history, and the art of deep listening. So, light the candles, put on your headphones, and get ready to drop that needle. The sacred ritual of listening to music on wax is about to begin. For this installment, Rachel investigates Jerry Goldsmith’s killer score for Basic Instinct.

As the last remnants of spooky season drift away on the pumpkin-spice-scented breeze, one can practically hear the collective horror community let out a melancholic and exhausted sigh. Although unquestionably the most glorious time of year, all of the recommendation requests from non-horror fan friends, movie marathons, repeated trips to Spirit, and exercises in willpower so as not to completely bankrupt oneself on creepy cute pillows inevitably take a toll. Perhaps then, it is this post-October comedown that has fueled the popularity of Noirvember.

Trading in slashers and supernatural specters for femme fatales and determined detectives, Noirvember celebrates film noir. Extremely popular in the 40s-50s, it wasn’t long before neo-noir spin-offs emerged. While many, like Blue Velvet (1986), Crimes of Passion (1984), and Cruising (1980), pushed boundaries and blurred genre lines by injecting more significant elements of horror and eroticism, it was truly the 90s that ushered in a new boom of noir-influenced thrillers. However, none caused quite the stir that Paul Verhoeven’s Basic Instinct (1992) did. Constantly teetering on the edge of distaste, Jerry Goldsmith’s magnificent score ultimately keeps the film from tumbling head over heels into full sleaze.

In the film, Michael Douglas stars as wavering San Francisco cop-on-the-edge Nick Curran. While investigating a rock star’s murder (by icepick during sex), Curran becomes introduced to the dead man’s rich, stunningly beautiful, and mysterious novelist girlfriend, Catherine Tramell. In an iconic performance, Sharon Stone embodies the intelligent, sexually confident, and intriguing Catherine to absolute perfection. As the questions and bodies begin to pile up around her, Nick struggles to resist Catherine’s potent personality and separate fact from fiction.

Previously having worked together on Total Recall (1990), the decision for Verhoeven (Robocop) and the Oscar-winning Goldsmith (The Omen) to reunite makes sense on paper. For both creators, Total Recall was (and remains) a personal high-water mark in their careers. And, with careers like theirs, that’s saying something. Yet, working with Verhoeven was no walk in the park for Goldsmith. Well known for his difficult working style and volatile temper, Verhoeven challenged Goldsmith in unprecedented ways. However, the two shared a mutual respect for each other’s vision, talent, and craft. Though challenging, the end results that Total Recall delivered made Goldsmith willing to embark on another treacherous Verhoeven cinematic adventure.

When initially approaching the film’s musical direction, Goldsmith had a few things to contend with. First was the general sound and instrumentation for the film. While Basic Instinct has clear noir influences, a traditional jazz-influenced, dramatic noir sound would simply not fit with Verhoeven’s vision. Rather than leaning into the more pulpy and titillating genre aspects of the film, Goldsmith appropriately approached Basic Instinct by boiling it down to its most basic elements; an intimate story driven by character. Like his atypical instrumentation for the neo-noir Chinatown (1974), Goldsmith allowed the story to guide his decisions, not genre. While this idea may sound unremarkable now, it was a very unexpected approach at the time for a film such as this.

Soon settled on a full approach of the orchestra with a few fun extras, the next hurdle was Verhoeven himself. After unsuccessfully presenting multiple theme ideas, Goldsmith found himself in tense waters with the notoriously opinionated director. Struggling to understand what Verhoeven wanted the music to deliver, the breakthrough finally came when Verhoeven could point to a tiny section of the piece that encapsulated the vibe he was going for. Now, with the musical language, Bernard Herrmann-esque style, and purpose nailed down, Goldsmith could genuinely get to work.

The framework for the entire score can be heard in the film’s opening “Main Title” track. But, the sheer brilliance of it doesn’t fully reveal itself until Nick and Catherine’s paths cross. Drenched in duality, the central melodic theme that the opening track introduces features strings and woodwinds prominently. This easily recognizable aural exchange between instrument groups allows Goldsmith to mirror the interplay between Catherine and Nick’s characters to remarkable effect. Though rearranged, executed, and manipulated in various ways, Goldsmith consistently keeps the core function of this opening theme in focus.

To explore this idea further, let’s take a look at “that” Basic Instinct scene. Following Nick and Catherine’s introduction, Catherine is brought to the police station for further questioning. Here, dressed in all white, Catherine sits (sans lawyer by choice) in a dramatically lit room in front of a wall of male police officers and lawyers. After defiantly lighting up a cigarette, Catherine confidently fields question after question from the men, each with their own agenda. Then, Catherine addresses Nick by name and asks a very pointed and personal question.

It is here that the track “Crossed Legs” kicks in. Calmly and coyly, the strings and woodwinds conversate with each other in a tensely restrained manner. Here, Goldsmith is carefully mirroring Nick and Catherine’s jockeying for control. Beautifully basking in her power, a lightly accented xylophone line emphasizes Catherine’s self-aware enjoyment. Underneath, low strings hint at simmering danger, while an echo-y manipulated wire sound embodies the growing tension in the room. A supremely seductive musical moment, Goldsmith perfectly captures the enigmatic mystery of Catherine and the unflinching power she wields over these men as a confident, intelligent, beautiful woman.

Even though strings are always a popular choice for composers, their inclusion here becomes especially relevant concerning Nick and Catherine. Both attractive adults in positions of power (authority versus wealth), there is a respectability there. However, through suspicion, both have proved to have a darker, perhaps even deadly, side. As horror repeatedly demonstrates, this idea and potential are deeply ingrained in the string family as well. While beautiful one moment, it doesn’t take much to transform a violin or a cello into an instrument of terror. Even if never fully activated, that potential is always there — for strings, Catherine, and Nick.

Even when it comes to the film’s small action scenes, Goldsmith always keeps the characters and the emotional undercurrent firmly in focus. Percussive and full of momentum, “Roxy Loses” and “The Games Are Over” highlight Goldsmith’s artful affinity for scoring action sequences. Magnificently incorporating brass, powerful piano, and repeating patterns in just the right amounts, the emotional stakes become palpable and believable. More than that, these moments fully confront the audience to question their own belief in Catherine’s guilt or innocence, with Goldsmith’s music leading the inquisition.

“The music of Jerry is phenomenal. [Basic Instinct] is one of these movies where music and film cannot be separated anymore from each other.”

While Goldsmith himself said that he would “like to eliminate 90%” of the records and recordings released of his work, Basic Instinct was not one of them. Nor should it be. Even for a composer as prolific, talented and revered as Goldsmith, Basic Instinct ranks up there as one of his most enjoyable, wonderful works to revisit time and time again.

Due to the time period, most of the original releases were on CD. There have also been some great remastered, reissued CDs released since. But don’t let that bum you record collectors out. There were certain markets where vinyl versions of the score were released—specifically, South Korea and Greece. Thanks to the wonders of the internet (there are a few, I suppose), these international versions of the score are out there for a semi-reasonable price.

Then, in 2021, Quartet Records did the good work by putting out a stunning 2xLP release that includes the full 70+ minute score. Released on 180-gram blood-red vinyl, the release includes a 6-page insert with liner notes by Daniel Schweiger and a gatefold jacket. Strictly limited to 500 units, these records are still available but may not be for long. Whether on CD, cassette, LP or Spotify, Basic Instinct is a must-listen score however you can get it.