The Subtle Parallels of the Mexican Revolution in ‘Nope’ 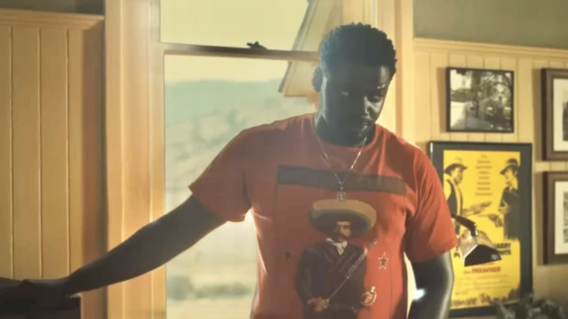 Jordan Peele’s third feature Nope is about the spectacle of cinema through a genre-blend film of sci-fi, horror, and adventure. While Nope may seem the most straightforward entry compared to Get Out and Us, one thing is for certain; the complex thematic layers are in the details. Costume designer Alex Bovaird’s choices for Angel’s (Brandon Perea) wardrobe at first appear to be a stylistic choice. But after careful examination, it is subtly revealed as a message to the audience.

Nope follows the siblings of Haywood Hollywood Horse’s owners OJ (Daniel Kaluuya) and Emerald (Keke Palmer) as they attempt to save their ranch. Struggling from financial hardships OJ has no other choice but to begin to sell off his horses to the nearby themed attraction called Jupiter’s Claim which is run by Jupe (Steven Yeun). As uncommon weather anomalies begin to transpire near the ranch, OJ decides to install several security cameras with the help of Fry’s Electronics crew member Angel, who soon catches wind of the Haywoods’ true intent. As the horses disappear, the trio ventures out to capture footage of what they suspect may be the culprit: a flying saucer.

After the initial and tense encounter of the third kind, the Haywood siblings and Angel regroup in the city at Angel’s place. Here he gives them each a band t-shirt, Jesus Lizard for Emerald and Rage Against the Machines for OJ. During the second act of Nope, you may be thinking Angel has great taste in music. Each band tee is given a proper amount of screen time and is overtly framed in each shot. The red Rage Against the Machine shirt could be seen as a marketing technique for the reunion of the ’90s rock band. But knowing how Peele always adds silent thematic tie-ins throughout the mise en scène in his films, the deliberate choice to have OJ wear this particular band is intentional.

What makes this specific shirt pop aside from the bright red contrasting against the dark night sky is who the shirt is featuring: revolutionary Emiliano Zapata. Rage Against the Machine is overt in its political stance through its lyrics, performances, and merchandise. There are many revolutionaries that inspired frontman Zach de la Rocha. Zapata evolved from a successful and skilled horse trainer competing in rodeos and horse racing to one of the most memorable Mexican revolutionaries. He’s a major influence on many people including de la Rocha.

The inspirational ideologies of Zapata can be found in tracks like “Zapata’s Blood”. This track speaks about the Indigenous revolutionary group, the Zapatistas, that formed in the ’90s in response to the corrupted government in Mexico and are considered the ideological heir of Zapata, whose name now corresponds with fighting against the oppressor. While Peele could have picked another Rage Against the Machine shirt featuring another revolutionary like Che Guevara, the decision to have Zapata front and center is crucial.

When we are first introduced to the Haywood siblings, OJ and Emerald take one of their horses to be filmed for a commercial. Before they start filming, Emerald gives a speech about the family business of Haywood Hollywood Horses. Her main talking point is how her lineage is traced back to the first ever moving picture by 19th-century photographer Eadweard Muybridge. But while there is information on the photographer, there is no information on the subject of the picture which in this case is the Black jockey riding the horse. This is where the lineage of the Haywoods and the first motion picture intersect. The unnamed Black jockey is a direct descendant of the Haywoods.

On the surface level, the comparison of Emiliano Zapata and the Haywoods comes strictly from them being BIPOC. The Haywoods are a reminder of the origins of cinema and the original Black actor and horse wrangler. Zapata’s portrait is a callback to the original vaqueros (cowboys) in the Americas. In the modern world, the dawning details of these horse wranglers are slowly getting whitewashed, erased, and forgotten. Yet there is still another layer of similarities to be peeled back.

The resemblance between OJ and Zapata begins with the deaths of their fathers as the catalyst for their journeys. After Nope‘s horrific cold opening with the live segment of the fictional TV series “Gordy’s Home” we meet OJ’s father, Otis Haywood Sr. (Keith David). His time is cut short as a quarter mysteriously falls from the sky and onto Otis’s head and enters his skull. After his death, OJ must now take care of the horse training business his father left behind. Emiliano Zapata’s life took a similar route after becoming an orphan after his father’s, Gabriel Zapata, death. Just like OJ, Emiliano Zapata was left to watch over his brothers and sisters which led to his entrepreneurial voyage.

After garnering skills as a successful horse trainer and farmer, Zapata entered the political sphere and was soon elected as the village’s council board president of his birthplace of Anenecuilco. Zapata fought for the rights of villagers and took matters into their own hands against the haciendas, massive estates used as businesses that exploited rural and Indigenous Mexicans. While Peele’s UFO may not be an allegory for the haciendas in the Mexican Revolution, the themes of exploitation are still prevalent between the two.

In Nope, Jupe exploits his horrific past with Gordy the chimpanzee for a quick buck. Jupe’s exploitative tendencies are taken a step further when the audience begins to realize the creature, nicknamed Jean Jacket, is being fed the horses OJ sells to him. But just like OJ mentioned, certain animals can’t be tamed. This holds true when the wild alien follows his own instincts and begins to suck up everyone inside the amusement park in one of the most uncomfortable scenes presented in a major blockbuster horror film.

This harrowing scene depicts Jean Jacket extracting resources from land it views as subordinate. To it, the people getting chewed up in its claustrophobic foreign digestive system are no different than the cattle Jupe would offer. This is exactly how the haciendas operated during the life of Emiliano Zapata. The estates were mainly put in place by the Spanish and would exploit the Indigenous people of Mexico by extracting resources off the land and labor with no remorse of who is supplying the needs. The haciendas metaphorically fed off the foreign-to-them land. That is until the villagers, led by Zapata, joined forces and sought to fight against the personified behemoths of oppression. OJ and his crew follow suit by fighting against a hostile alien who literally devours off a foreign-to-it land.

The film’s climax is filled with non-stop suspense and sci-fi action as the trio attempt to take the “Oprah shot” of Jean Jacket. By this point in Nope, OJ’s wardrobe is changed into another hand-me-down, this time from his father. OJ is sporting an orange crew members sweater for The Scorpion King, a film where the BIPOC protagonist must fight against the White oppressor after the genocide of the majority of Indigenous tribes.

While the red Rage Against the Machine shirt is only prevalent during OJ’s decision to fight against the extraterrestrial during the second act of Nope, the ideologies of Emiliano Zapata are still present in the third act. On the back of the shirt, although never shown on screen, is one of Zapata’s most famous quotes: “It’s better to die on your feet than to live on your knees.” These are words that many live by, whether they are inspired by Emiliano Zapata or not, just like Zapata’s followers during the Mexican Revolution, the Zapatistas in the 90s, Dwayne Johnson’s character in The Scorpion King, and OJ. The urge to fight against the oppressor is universal. The decision to highlight one of Mexico’s revolutionary heroes in a blockbuster film about fighting against a foreign power is more than just a stylized choice. It is a revolutionary act.