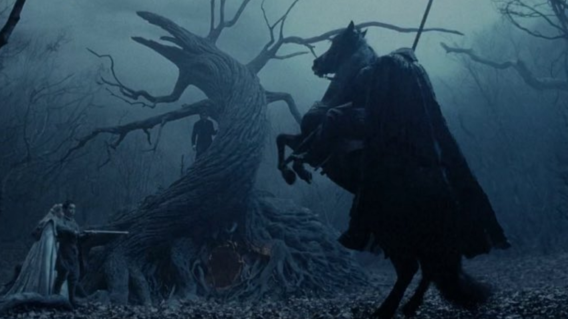 Horror is full of different ways to die. For the most part, though not always, death is the ultimate horror consequence, the one fate every character on-screen is desperately looking to avoid. Slasher movies amble around, racking up an enormous body count. Some entire franchises such as Final Destination are predicated almost exclusively around dodging and evading death. While all death is bad, some kinds of death just feel that much worse. Maybe rooted in childhood fears of girls with green ribbons. Maybe it’s the not-so-comforting notion that post-death, brain activity can remain for several minutes. Whatever it is, it’s likely decapitation specifically areusthe worst kind of horror death. Quick, efficient, and common, it’s a horrifying concept.

Here, in a totally-not-at-all grim list, we’ll be looking at 10 of horror’s best beheadings. While this list isn’t decapitation dispositive, these are 10 of the best we’ve seen (in no particular order).

Perhaps one of horror’s most famous deaths, the beheading from The Omen is noteworthy for several reasons. First, given its year of release, it likely resonated as considerably more shocking to audiences than some more contemporary fare. Additionally, it all just feels so unexpected. Midway through, The Omen becomes something like an Indiana Jones movie. Gregory Peck’s Robert Thorn and David Warner’s photographer Keith Jennings travel to Rome to investigate the true origins of Robert’s son, the antichrist. While there, an errant truck rolls down a hill, and at the bottom, a sheet of glass slides off, severing Keith’s head. It shatters the window behind him, a glorious spectacle of nasty, shocking gore in one of the genre’s best decapitations.

Tim Burton’s Sleepy Hollow should be one of Halloween’s definitive movies. Little else has so adroitly conceptualized the feeling of a Mid-Atlantic fall quite this well. With its gorgeous sets and committed acting, Sleepy Hollow endures decades after release, one of the touchstone big-budget R-rated offerings the ‘90s were so eager to produce. Of course, with a movie centered around the Headless Horseman, there are several decapitations, but perhaps the best is Richard Griffiths’ Samuel Philipse, the town magistrate. His beheading is a gothic set piece straight out of a dream, and it also serves its purpose as the death that galvanizes Johnny Depp’s Ichabod Crane into believing the rumors of a headless Hessian are true.

What else is there to say? Tom Savini is a master of effects work. Aside from Kevin Bacon’s arrow through the throat, most of the deaths in Sean S. Cunningham’s slasher debut are relatively tame, at least pursuant to genre standards. That’s likely because it’s saving the best for last. Final girl Alice (Adrienne King) is having a knockout brawl with killer Mrs. Voorhees (Betsy Palmer) at the lakefront. She spies Mrs. Voorhees’ machete and scrambles to reach it in time. She does, and in slow-mo glory, viciously decapitates the killer.

Elevators are terrifying. Whether it’s because of Dick Maas’ The Lift, a quasi-slasher about a sentient, killer elevator, or the old urban legend of there being “room for one more,” I’ve never quite trusted them. Final Destination 2 solidifies that fear perversely, transitioning from second to third act with a swift, unexpected death by elevator door. Lynda Boyd’s Nora has already lost a son, and as the survivors of the highway accident assemble, she remarks being ready to go when the time is right, if only to be with her son. She leaves via elevator, and while inside, has her braided hair caught on a hook from a man inexplicably carrying a box of hooks. As she struggles to break free, no longer wanting to die, her body ends up outside the elevator at the next floor. She can’t get back in, and as the car rises, her head is severed. Sure, Resident Evil might have done it a few years before, but Final Destination 2‘s decapitation wins out not just for the savagery, but also the cruel irony of it all.

There’s no denying that Hereditary is a bit more conventional than most A24 horror outings. There’s accessibility to the narrative pacing and scares, even if it is home to some of the genre’s most unsettling images. While Toni Collette’s death-by-garotte is a strong contender here, it’s Milly Shapiro’s decapitation that takes the chocolate walnut cake. After she goes into anaphylactic shock at a party, brother Peter (Alex Wolff) races to get to a hospital. Shapiro’s Charlie is struggling to breathe, so Peter opens a back window for her to stick her head out of. As he swerves the car to avoid an animal, Charlie’s head collides with a telephone pole, knocking it clean off.

High Tension is a great movie let down by a pretty infuriating ending. It’s not just bad, but patently illogical, impossible to reconcile with the events that preceded it. That being said, everything before that is pure home invasion heaven with a dash of road movie pursuit. Cécile de France’s Marie is poised to spend the weekend with Alexia (Maïwenn) and her family at their rural country home. The night they arrive, a nameless killer breaks in, slaughtering the family and kidnapping Alexia. The killer is at least kind enough to ring the bell, and when dad (Andrei Finti) answers, his throat is slashed. More than that, his head is pressed between two ballusters on the staircase. The killer then shoves a bookcase toward him, snapping his head clean off. In other words, High Tension’s NC-17 rating tracks.

While all of the previous decapitations have been quick affairs, George Romero and Tom Savini were kind enough to slow it down. As Private Torrez (Taso Stavrakis) is engulfed in a swarm of the undead, they tear him apart. His skin crunches and his blood spews, and as a capstone to the entire horrific affair, his head is pulled clean off.

Until the ending to Halloween H20 was retconned years after with the release of Halloween: Resurrection, there was perhaps no better an ending to any Halloween movie than the one seen here. Jamie Lee Curtis’ Laurie Strode escapes with Michael, certain he isn’t dead. Michael awakens in the van, they struggle, and Laurie and Michael are sent flying down a hill. As Laurie comes to, she finds Michael pinned against a tree by the van. He reaches out for salvation, and for a moment, Laurie looks willing to oblige. That is, of course, until she grabs a handy axe and lobs his head clean off, ending her nightmare for good. Or so it would seem. Why, Halloween: Resurrection? Why?

House of Wax’s decapitation might seem lowkey by the standards set by this list, but it’s still a goodie. Keep in mind, Jaume Collet-Serra’s House of Wax was one of the last bonafide slashers with a wide release in the 2000s. As the subgenre waned, ghosts and J-horror remakes reigned supreme, leaving the slasher and all its severed heads to rot in the dust. Luckily, Collet-Serra spared no stylistic expense with House of Wax, and love it or hate it, there’s no denying it’s a good-looking movie. As Jon Abrahams’ Dalton wanders into the wax town, not yet aware of the danger, he is attached by Vincent (Brian Van Holt). As he stumbles down a waxy staircase, Vincent plunges two gorgeous, gilded knives into Dalton. Or so the audience thinks. As Dalton falls still, Vincent drags the body away, leaving Dalton’s severed head behind.

1. The Cabin in the Woods

Poor Jules (Anne Hutchison). She simply wanted to have an intimate moment with Chris Hemsworth’s Curt. At the behest of some pheromones released into the house, Jules and Curt are induced to have sex. While in the woods making out, the two are ambushed by the zombified corpses they inadvertently summoned earlier. While they put up a respectable fight, Jules is impaled by a modified bear trap on a chain and dragged toward her doom. By dint of a giant saw, her head is sliced off. It would have been worth it, too, had Marty (Fran Franz) and Dana (Kristen Connolly) not opted to let the world end.