Celebrating (and Mourning) ‘The Owl House’: A Retrospective of Queer Animated History’s Progress 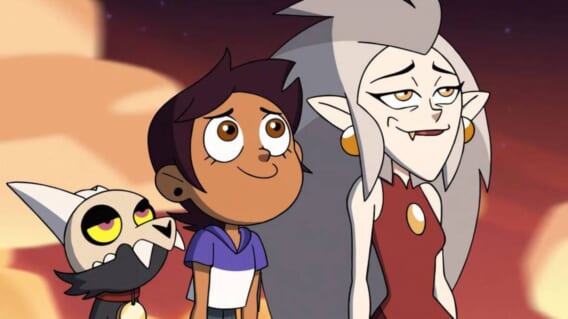 The Owl House created by Dana Terrace and currently airing on The Disney Channel, is the quiet juggernaut of queer introductory horror programming. The show has attracted legions of fans of various ages and global demographics to a world of fantasy and magic. If the fandom has anything to say about it, they are far from silent about their love for this beautifully animated show that places LGBTQIA+ identities front and center. Every episode feels like a fever dream in the best way, especially for older viewers that are still reckoning with the constant deluge of content that centers on the stories of non-heterosexual or non-cisgender children.

Lest we forget, this centering of queerness as commonplace was not a reality for children growing up in a pre-2000s (and still rigidly conservative) world. Seeing accessible programming like The Owl House that centers queer children (and the queer elders that care for them) is still groundbreaking and revolutionary; the show makes this reality as mundane as breathing.

Alas, the show is soon coming to a close after a bitter battle with Disney executives—or if from Dana’s account a single individual—heralded the show’s untimely demise. Plus, the company’s public flat-footedness during the ongoing ‘Don’t Say Gay Bill’ fallout legislation from one of its preeminent bases of operation in Florida soured a lot of the goodwill that was brokered between Dana and the creatives of the show. The fanbase could care less about the Disney company as a platform; they only wished for this beautiful show to continue elsewhere. Many petitions are still active for the show to be housed and nurtured elsewhere.

Coming from a human world that attempted to box her in and file her away as a problem to be solved, Luz stumbles upon a portal that leads her to an ancient and magical land called The Boiling Isles. From there, her adventures begin with the wonder of a realm that seemed plucked out of her fantasy books. She meets two individuals that change her life forever: Eda the Owl Lady (Wendie Malick) and an adorable fox-like demon named King (Alex Hirsch). Eda is a forced outcast amongst larger society and King is the last of his kind. Luz finds familiarity and a home with them immediately. Without a cavalcade of spoilers, the storylines of Eda’s childhood curse and King’s origin story of titanic proportions are some of the most incredibly written and heartbreaking backstory character development I’ve ever seen in a show, animated or not.

Also Read: The Bride and Her Daughters: 5 Horror Films About Ill-Fated Marriages And Queerness

At first glance, it might seem that Dana Terrace, the writers, artists, and all persons involved that brought this show to life had an uphill battle in pitching, selling, and ultimately getting the green light for a show that seems so far and away from the standard Disney fare of programming. When in actuality, from the very onset the show had a lot of support from various internal leadership members. It was seen as a beautiful and necessary addition to the animation department. Now teenage to young adult demographic could see themselves in a narrative about otherness, kindness, and chosen family. Moreover, The Owl House utilizes all of the ingredients that made the company a juggernaut in the realm of entertainment. After all, fantasy, magic, the fantastical, the phantasmagorical, and stories of the unlikely hero are sprinkled throughout the history of the Disney catalog.

The stumbling block and, perhaps the hardest selling point, was just how unapologetically queer the show would become. There’s a blatant rather than suggestive romance between its two young leads. There are seamless introductions of characters outside of the binary. Lest we forget, the show was situated on a rollercoaster, wherein a lot of the network’s programming was shifting to its streaming service Disney+ or being removed from cable services as an option to view outside of its sister channel DisneyXD. The show was also neglected from when it first premiered on the network. Marketing was initially high for the program. But it gradually declined as the episodes rolled out with minimal fanfare outside of all of the heavy lifting on social media. Commercials for the show are infrequent, sandwiched in between blocks of airtime with no context of what delights the show truly holds.

Also Read: The Hunt for Queer Jewish Representation in Horror

Truly, it’s a shame because with only 39 episodes under its belt, the show has been so densely packed with gorgeous animation and fight scene choreography, lore that would take multiple wiki pages to unpack, embracing othered bodies and physical appearances, narratives of PTSD, neurodivergent characters, and stories of young people navigating ‘growing up’ in tandem with self-affirmation and actualization the show truly comes off the ropes swinging in every single episode. Moreover, one of the show’s most laudable aspects is its inclusive and diverse voice casting sometimes juxtaposed with character design. The IMDB page alone is like a who’s who of horror, sci-fi, and pop cultural icons.

This retrospective on the entire series, its characters, world-building, and the external factors that shaped the series would be incomplete without the charismatic face of the show itself. Luz Noceda, voiced by Sarah Nicole-Robles, is the first bisexual and Afro-Latina character on a Disney channel program. It’s undeniably a shame that it’s taken this long for a character like Luz to grace our screens. But alas slow is the march of progress.

We know as queer people that our stories are frequently written and performed by uninformed straight or cis people. But fear not; the show is incredibly adept in its writing and avoids cringe-inducing phobias, misunderstandings of the nuances of gender/presentation, and the import of seeing our stories unencumbered by tragedy or death. The show always tries to eke out moments of joy amidst the gloom and existential dread.

Trust me, some episodes will leave you reeling, bawling, and destroyed. I appreciated every Kleenex-inducing moment because the payoffs it led to later in the series will make you cheer. Speaking of exclamations of joy, the age-old ‘enemies to friends to lovers’ trope was utilized to beautiful effect as the relationship between Luz and her eventual girlfriend Amity (Mae Whitman) played out. First dances, first dates, first kisses, just a whole litany of firsts that will have you beaming and clapping for these two precious babies as they love and grow together. Their Grom Fright dance (season one, episode 16) before they even become an official couple broke Twitter, Tumblr, and the Internet for a while. I’m sorry if you missed it because this was a YOU HAD TO BE THERE event as it unfolded.

*Sidenote, when the animation skyrockets in quality with Lumity (their official shipping title) wondrous things are about to occur.*

Also Read: ‘The Perfection’: A Love Letter to Lesbian Horror

Young and older queer people were screaming because this love story was unfolding before their very eyes, beyond the realm of ambiguity. We knew its eventual resolution was going to wreck us even further with its execution. I should also note that there were layers to the rejoicing. Young people had even more regularly featured characters from the LGBTQIA+ umbrella to associate with. Older viewers, on the other hand, realized that the tide had permanently shifted past The Legend of Korra’s softened ending, Adventure Time’s hard-wrung queer acknowledgment, Steven Universe’s tightrope walking, or even She Ra and the Princesses of Power’s final swansong. We knew as late 20-somethings and older that the queer landscape in animation was bleak, once upon a time. There wasn’t a chance to have a main cast member with a featured storyline of navigating dating and relationships.

The Owl House’s dedication to all of the nuance of Luz and Amity’s journey truly shows all of the love the entire team has for the show and its young audience. Oh, and the creators didn’t leave the adults to languish unseen with no romantic attachments. There is plenty for the elders too, don’t you worry. The lovely plant magic-wielding Willow’s (Tati Gabrielle) character has two dads. Eda had a childhood friendship-to-relationship story similar to Luz and Amity, shown in her storyline with the non-binary Raine Whispers (played by young Blu del Barrio and older voiced Avi Roque). Oh and I forgot to mention that Eda is bi and/or pansexual and her sister Lilith is asexual. God, this show is the best.

What’s awful is that the show will soon be coming to a close and it’s one of the best-kept secrets on television. The network is sitting on an embarrassment of riches. The show is going to come to a close with a whimper, rather than a bang, and therein lies the tragedy. Rarely do I give a show the almost perfect label. But The Owl House is just firing on all cylinders in every single episode. I’m heartbroken that the series will conclude with a season three-ish of sorts that are a handful of extended-length episodes to wrap up the show. It has me oscillating between furor and despondency. May 26, 2022 saw the end of the second season with a gripping and emotionally wrought season finale that will have to tide us over until the series navigates this last slew of episodes.

Beyond my devastation of how The Owl House will conclude, I’m happy to be alive to see it. This reaction to Clouds on The Horizon (season two, episode 20) starting at the 14:35 minute mark to 19:03, by the Not-So-Average-Fangirl, encapsulates all of the emotions this show engenders. Tween-age me never could have fathomed growing up that there would be this cornucopia of queerness waiting for me as the decades progressed and the space evolved for animated stories to exist like this in all of their rainbow-bedazzled glory. Dana, the entire animation team, the voice actors, and everyone behind the scenes that brought The Owl House to life have my eternal gratitude and unabashedly deserve a hoot.