The Hunt for Queer Jewish Representation in Horror 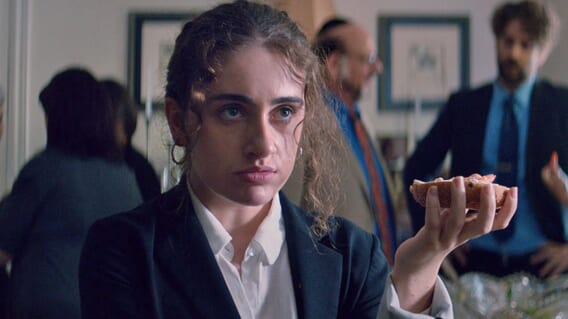 We all want to see ourselves represented on screen. To see a character that reminds you of yourself is genuinely transformative, and everyone deserves to have that experience. Unfortunately, the struggle for balanced representation never seems to end. I have been searching for a specific kind of queer Jewish representation for years, and I know I’m not alone.

Of course, modern media is no stranger to the queer Jewish character. With contemporary comedy films like Shiva Baby shining a spotlight on the community, you’d think that we’d be satisfied. But frankly, I’m tired of settling for only seeing queer Jews in romcoms and coming-of-age tales.

I want to see queer Jewish characters in horror, and I want it yesterday.

Jewish horror is not a rarity, especially in recent years. Films like Doron and Yoav Paz’s The Golem and Keith Thomas’s The Vigil do a wonderful job of showcasing how rife our culture is with elements of horror. The practice of sitting shiva (also a plot point in Shiva Baby) is one that frightened me as a child. It works perfectly as a device when it comes to portraying a combination of grief and terror. So many facets of Judaism are rich with stories of mysticism and magic that it’s no wonder we embraced horror as a genre. In fact, the 1920 Jewish film The Golem: How He Came into the World is credited with being a precursor to all Frankenstein horror films that followed.

Even in films where horror isn’t present, so much of Jewish cinema is filled with enough tension to make you grind your teeth. In the dramedy Shiva Baby, tension runs through the story like an active current. The story depicts a young Jewish woman struggling to balance expectations from her family, her ex-girlfriend, and her sugar daddy while sitting shiva for a deceased relative. The process of sitting shiva typically lasts for a week, providing family members time to mourn the passing of a loved one. The rituals associated with sitting shiva require covered mirrors, seven days of lit candles, and other traditions that help the mourning process.

This is, essentially, the basis for the film The Vigil, which follows a mourner who sits overnight with a recently deceased individual. But by taking the dramatic aspects of Shiva Baby and shifting the scope to something more sinister, such as the main character’s inability to find out which of her relatives passed away, you could easily have a pulse-pounding queer horror story on your hands.

The queer community and the horror community have a great deal in common. They both exist as safe spaces for “outsiders”. As someone who grew up feeling othered for being Jewish my whole life (and later in life, queer), I was always looking for places to see myself. Horror always appealed to me because the genre itself exists outside the traditional parameters of storytelling; it focuses on emotions that we often run from like fear, dread, or tension. Unlike drama or romance, horror can change dramatically from story to story depending on the subcategory it leans into. Horror has different rules than other genres – hell, sometimes horror doesn’t even have rules. And that’s what I love about it. It’s also what I love about being queer.

As a queer person, I get to choose how I define myself, my gender, and my sexuality based on the terms I want to use. I can free myself from the constraints of expectation and become the person I really am. There’s nothing more precious or beautiful than that.

Judaism, in some respects, is similar. Growing up, I wasn’t forced to worship any particular way, and the traditions we practiced were more rooted in the community than in faith. But the way that the Jewish community and the queer community take care of one another is deeply similar. In Judaism, we have the word “tzedakah,” which references charitable acts that we do for our community. This has always reminded me of the way that queer people take care of one another, sharing fundraisers for transitions, rehousing, and other basic needs. In both of these communities, the priority has always been the people, and that’s how it should be.

Of course, this isn’t the only overlap between Jewish people and the LGBTQIA+ community. Both groups have long been cast as society’s villains. In 2019’s The Golem, which takes place in 1673, one of the villagers acknowledges their concern over the “demonization of the Jewish people”. This line struck me particularly hard, especially considering the caricature of Jewish people in popular media. If we weren’t demons, we were goblins or something far worse.

The queer community has experienced an onslaught of abuse for decades, and our villainization has always been shoved in our faces. The type of villain we portray has shifted over the years, depending on which section of our community is being attacked at any given time. In fact, queer villains became such a commonplace occurrence that it eventually became its own trope. Even now, as we turn on the news, we can’t escape the reality that places us once again in this role. We are continually cast as villains by people who don’t know us, cursed to be perpetually misunderstood.

This is where queer horror shines the brightest: in the dark. Queer horror is beautiful because it allows both the viewer and the creator to explore the fringes of traditional storytelling and of the world we live in. Where I find that queer stories in other genres are focused on coming out and finding love, queer horror takes the pain we’ve experienced and turns it on its head. Some stories focus on queer relationships with society or with our own bodies, while others eschew all expectations completely. Films like Tony Scott’s The Hunger and Karyn Kusama’s Jennifer’s Body show that queer characters, and their stories, can lead horror films in a bold and imaginative direction. I know that queer Jewish characters can do the same.

Seeing more queer Jewish characters represented in horror would give us a feeling of belonging, one that we so desperately need. In the terrifying fictional world that horror creates, we can finally be free. But if we must be forced into the reality where our lives as queer, Jewish people are threatened merely because we exist, then there’s no reason we shouldn’t embrace it and use it to fuel us creatively. I continue searching for queer Jewish representation in horror because that is where I feel safest: among the communities who understand me.