In Defense of Juno in ‘The Descent’ 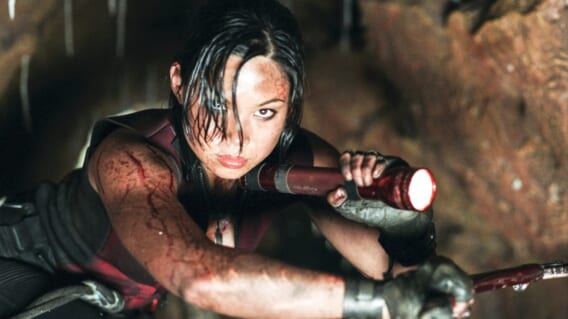 Neil Marshall’s The Descent remains unmatched. Its stateside release will be turning 16 in August, and in the period since, nothing has come close to matching its sheer, claustrophobic ferocity. Expanding on the inimitable success of Ridley Scott’s Alien—a clear progenitor for The Descent’s monstrous thrills—Marshall cast a sextet of women, all of whom are akin to vessels for the best qualities of menace-to-Xenomorphs Ellen Ripley. After a spelunking trip goes awry, these six women are trapped within the bowels of the earth with no clear way out. That disaster doesn’t even account for the ancient humanoid crawlers living within. Brutal, stark, and gory as hell, The Descent works exceptionally well not just as a monster movie; it’s a rapacious bereavement allegory for protagonist Sarah (Shauna Macdonald).

Reeling from the loss of her husband and daughter in a prologue of rural road impalement, Sarah isn’t just overcoming external monsters, but the internal beasties hiding within herself and her friends, namely, Juno Kaplan (Natalie Mendoza). Juno, the audience learns, wasn’t just having an affair with Sarah’s husband; she has also led the other five women astray, diving into an unexplored cave system, and deceiving her friends into thinking it’s a tourist trap, nothing more. Naturally, the women are furious, certain the trip was little more than a self-aggrandizing venture for Juno; merely an opportunity to assuage her own guilt and maybe discover a new cave system in the process.

Resultantly, when the women are attacked after a deliciously patient set-up—The Descent has long been heralded as working as not only a monster movie, but a viciously unnerving underground survival story—it’s easy to place blame on Juno. After all, had she been honest, they never would have been in this cave system to begin with. It’s a fair assessment, and when the monsters attack and start ripping throats, Juno is rendered a villain. Sure, she never could have anticipated monstrous humanoids. But in the heat of the moment, it’s easy to tar and feather the most irresponsible member of the group.

That is, of course, until The Descent makes a fatal mistake, one that renders Sarah, not Juno, as the chief human antagonist. While fending off a swarm of humanoids with incredible feral verve, Juno accidentally strikes Beth (Alex Reid), impaling her through the throat with a pickaxe, thinking she’s a monster. It’s a moment that’s supposed to cement Juno’s antagonism, juxtaposed against Sarah’s virtuous, all-for-one ideals. But one can argue that the remaining act of the movie renders Juno the hero, not Sarah.

With regard to the accidental death (manslaughter, but make it crawler-slaughter), Juno can’t necessarily be blamed. With everything going on, it’s incredulous that Beth wouldn’t have simply called out. At this point, neither Juno nor Beth are aware that the humanoids hunt via sound. That’s knowledge that only Sam (MyAnna Buring) and Rebecca (Saskia Mulder) currently possess. So why Beth would approach a scene of carnage without saying a word defies logic. From Beth’s vantage point, Juno is conspicuously riled up, a cortisol-fueled monster killing machine. Yet rather than announcing her presence (or assisting Juno in her fight), she sneaks up on her, meeting an untimely end as a result.

While it certainly doesn’t excuse Beth’s death or suggest she deserved it, it does recontextualize Juno’s actions. She never intended to kill Beth, and at that point—as Beth bled out on the ground—what more was she supposed to do? There were three other women trapped in the cave. While Beth begs Juno not to leave, it’s pure desperation, dying words delivered through gurgled breaths, not gospel. When trapped in the dark, there are no easy answers, and while it’s easy to see Juno’s abandonment as inhumane, it was one bad option among a suite of bad options. The Descent revels in these kinds of moral dilemmas.

Additionally, Juno doesn’t leave Beth to die so she can flee. Instead, she tracks down Sam and Rebecca, both of whom actually do want to leave, Sarah be damned. It’s Juno who argues they stay and find Sarah. In her own words, she isn’t leaving the cave system without her. A cave system, it’s worth noting, Juno has assessed, using cave markings to identify an escape route, critical knowledge no one else possesses. She not only currently holds the title for most kills, but she’s the only one with an efficacious plan for escape.

After Sam and Rebecca are killed despite Juno’s efforts to save them, she continues to search for Sarah. She soon finds her, and while it’s not great that she lies about Beth’s death, it’s akin to all manner of interpersonal drama in life-or-death scenarios. Argue over the infidelity or lies after you’ve escaped from the cave of monsters, not while you’re in the thick of it. I’m looking at you, most every horror character ever.

After taking down a group of crawlers, Sarah—aware of both the affair and Beth’s death—stabs Juno through the leg leaving her to die. Of course, whether she dies is contingent on whether audiences take the US or UK ending as canon (and whether The Descent Part 2 is acknowledged). But for all intents and purposes, it’s reasonable to posit Sarah was leaving Juno to die. It figures, then, that while Juno’s actions were irresponsible and myopic, Sarah is the only one to make an active decision to hurt someone else. Leaving Juno to die is both unwarranted and vicious, and in those moments, Sarah becomes the monster, not Juno.

Juno, instrumental to Sarah’s escape, is discarded on account of personal grievances, Sarah prioritizing her well-being over the well-being of a friend, however bad a friend Juno is. As Sarah skulked through the cave system on her own, Juno was fighting for her friends, procuring relevant knowledge, and actively tracking Sarah down. Had Sarah found the exit on her own, there’s little doubt she would have escaped, leaving everyone else to fend for themselves.

In other words, the movie might reasonably be retitled “The Descent of Sarah’s Selfishness.” Of course, it’s worth noting this perspective isn’t dispositive. In a lot of ways, Sarah rules, and contingent on my state of mind going in for one of the dozens of rewatches, I vacillate easily between loathing and celebrating Juno. More than anything, it’s core to the enduring success of Marshall’s classic. It’s six textured, three-dimensional women, all of whom are uniquely suited to the horrors they encounter, and part of the thrill is watching them make use of their unique skills to survive. It’s never dull, and in terms of clear-cut rights and wrongs, it’s never easy. No one, not even Sarah, escapes unscathed. 16 years later, it’s worth taking the plunge into the cavernous hole of crawler hell. You never know what you might find.