As the Good Book Says: A Post-‘Midnight Mass’ Reading List

Need to fill the 'Midnight Mass' shaped hole in your heart? Check out this extensive reading list to get your emotional horror fix! 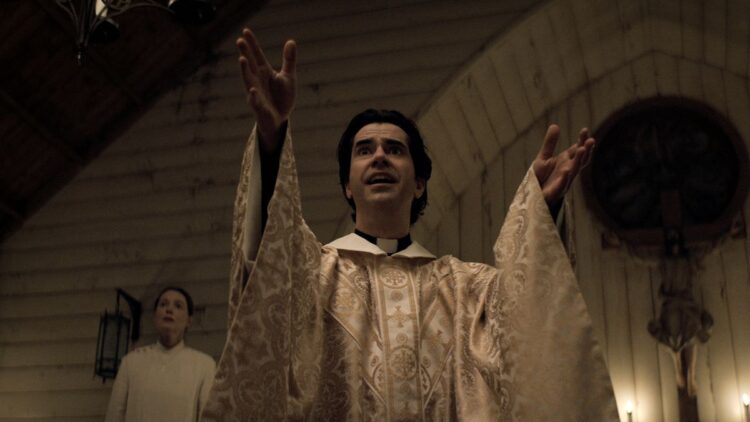 Midnight Mass is a darkly literary slice of American gothic horror. The entire show creates an ambiance of terror that speaks to the long and rich history of horror on both page and screen. The entire series is like the best gothic novel you were never assigned in your American Fiction class. It’s easy to see why people would be thirsty for more media that has the same feel or explores the same themes that Midnight Mass does. The literary makeup of Midnight Mass can be described best as being an amalgam of Stephen King, Shirley Jackson, Sam Shepard, and other greats.

If you are one of those hungry people looking for more Midnight Mass-type goodness, look no further. This list contains a slew of media that contains similar themes and elements to the incomparable Midnight Mass. Of course, if you are one of the few who hasn’t partaken in the series, there will be spoilers, so this is your chance to turn around and go watch the show. Don’t worry. I’ll save your place for you.

There are some pieces of literature that obviously influenced Midnight Mass. I want to spotlight them and give them their time of day but mostly focus on stories that people might have missed in their watch and encourage others to branch out and explore the truly powerful themes that the show broaches in other tales as well as these. We’ll take a look at some underrated reads and a few wild cards thrown in there too.

“The Lottery” by Shirley Jackson

Jackson’s tale of blind faith gone wrong obviously had a bearing on Midnight Mass. Instead of stoning, however, there is gruesome mass suicide. Jackson highlights the dangers of following tradition and others without questioning motives and reasoning.

This one is self-explanatory. If you’re looking for more small towns and vampires and haven’t read this one yet, then what are you waiting for? There’s even a priest in this one.

“The Mist” by Stephen King

Bev Keane and Mrs. Carmody are two peas in one insidious pod. Both are hypocritical zealots who grasp at power under fantastical and supernatural dilemmas. Their terrifying natures are far too familiar in the world we live in today.

A town is ripped apart by supernatural forces and their own greed and dark desires. At this point, it’s safe to say that Mike Flanagan might be the heir apparent not only to gothic itself but Stephen King’s own brand of humanistic horror.

The Scarlet Letter by Nathaniel Hawthorne

Hawthorne was taking the themes of religion, society, guilt, and sin to task way before we all were born. The Scarlet Letter is a staple for a reason. It weaves in a sinister sort of gothic magic. Not to mention it includes a clergyman having an affair with a married congregant that results in a pregnancy. That’s not unlike the backstories for our beloved Monsignor Pruitt and Mildred Gunning.

The horror in Jackson’s “Flower Garden” is racism, and the culprit is society and microaggressions. This short story isn’t discussed as much as it should be. It follows a young woman who finds herself ostracized by her small town after displaying human decency and kindness toward a Black man and his children. The story is told from the perspective of a woman who is Bev Keane’s kindred spirit. While not overt horror in a traditional sense, there’s a creeping sinister quality to this tale.

“The Summer People” by Shirley Jackson

This creepy story builds on dread and the idea that something horrifying is going to happen. Midnight Mass has this same brilliant quality where the viewer is on edge waiting for something awful to take place. Again, small towns and locals are the aggressors in the most peculiarly haunting way. This short story concerns a couple who summers in a small town and decides to stay past when most of the eponymous summer people leave.

“The Possibility of Evil” by Shirley Jackson

Midnight Mass’s Bev Keane could easily be a character from a Shirley Jackson tale. “The Possibility of Evil” looks at an older woman who becomes far too involved in the lives of those around her. Like most Jackson stories this has its own unique brand of sinister domestic gothic horror.  Sadly and most assuredly, we all know a person like the old woman featured in this story.

We Have Always Lived in the Castle by Shirley Jackson

This novel from Jackson cribs on themes such as mob behavior and the horrific small-mindedness that can fester in small towns. It’s a masterpiece in its own right that’s populated with vivid characters and has that same morbidly whimsical charm that’s a staple of Jackson’s writings. There’s nothing supernatural at hand, but Jackson realized that all monsters are startlingly human.

Hawthorne’s short stories are woefully under-discussed outside of English classrooms. “The Minister’s Black Veil” explores the nature of secret personal sin people carry around with them. The local reverend in the tale wears a black veil to represent his own sin, yet that sin is never disclosed within the plot. It’s a weird and haunting little tale that leaves a lot to mull over afterward.

“Young Goodman Brown” is a tale of disillusionment in society and those around you once you truly see people for who they are. Hawthorne peers into the heart of human evil and depravity and how that affects others and can cause people to slip into cynicism. The titular Young Goodman Brown finds himself at odds with religion when he realizes his good Christian community isn’t what he thought it was.

Fool for Love by Sam Shepard

Plays are generally meant to be seen on stage, but Shepard’s works make for a good read, as well. While Fool for Love isn’t supernatural or horror, it’s a midwestern gothic that looks at human failures and how children repeat the toxic cycles of their parents if they don’t actively seek to break them. Shepard, like Flanagan, has a keen eye for messy and raw humanity and creates stirring monologues that are as pretty as any prose out there. This play sees two lovers on a collision course for disaster and how helpless they are to their own feelings in the midst of it all.

Buried Child has that inherently morbid gothic quality that is found in Fool for Love. This play is another midwestern gothic yarn that isn’t supernatural but explores the inner workings of a dysfunctional family and the futility of the American dream. A young man and his girlfriend go to visit his grandparents, father, and uncle. Everything that can go wrong does. The play deals with general disillusionment regarding the nuclear family unit and disappointment in oneself and those around them. Shepard uses familial chaos to mine and explore the human condition.

Luella Miller is a tale of a woman whose deceptively angelic looks hide a dark nature. All those who come to care for her meet horrible ends, while she maintains an air of stark innocence. This eerie story has that same small-town feel with the bonus of some remarkable supernatural happenings. The story implies that Luella is a vampire of some sort and is told from the perspective of a woman who’s a bystander to Luella’s reign of terror.

Ed is seen reading this King novel in the series. Flanagan was once attached to direct his own adaptation of Revival, but that has since sadly fallen through. Hopefully, in the future, Flanagan’s adaptation will pan out and he can continue to explore and build upon the themes of religion, existentialism, and skepticism he explored in Midnight Mass with Revival.

Hellblazer’s original run lasted from the 1980s to the 2010s, but perhaps one of the best arcs is Garth Ennis’s Dangerous Habits storyline. Ennis marries horror with existentialism to create a distinctly human and reflective tale. John Constantine is dying of cancer, and understandably the fear of what comes after death is there. This is a comic that’s not afraid to explore the darker places of humanity and existence in itself, but these issues do that particularly beautifully. There is a distinctly lovely hope spot at the end of this arc for John with the arrival of old friend Kit Ryan. If you like Midnight Mass’s darkness and existential nature this one is an offbeat must-read.

Ishiguro weaves science fiction with existential questions about the soul and death in this heart-rending novel that follows the lives of clones whose organs are used for transplants. While this book technically isn’t horror, it is horrifying. It doesn’t ask any easy questions about existence and what it means to live and die and it gives no easy answers. The emotionality of this book will certainly appeal to those that are fans of Flanagan in general as well as those who particularly liked Midnight Mass.

The Crucible by Arthur Miller

Arthur Miller’s classic allegory for McCarthyism shows what can happen when religious fervor, personal interest, and hysteria wreaks havoc on a small community. Miller has a penchant for creating flawed characters that are essentially good people at their core. Miller’s characters in The Crucible echoes Flanagan’s flawed heroes who similarly find themselves at the mercy of a community gone awry.

The Picture of Dorian Gray by Oscar Wilde

If you’re especially eagle-eyed, you’ll notice that Mildred Gunning is seen reading this particular novel in the series. Oscar Wilde writes of gothic decadence and depravity, as well as youthful visages that hide older souls. It’s a perfect nod to Father Paul/Monsignor Pruitt’s big secret and double identity that’s revealed earlier in the show, as well as Mildred’s own transformation.

“The Lady of the House of Love” by Angela Carter

Angela Carter is great at creating vividly pensive characters. This is a gothic short story about a vampire struggling with her morality and the desire for love and freedom from her existence. Like Midnight Mass, this is not your typical vampire tale and it dwells on living and introspection. It’ll make a beautiful read for those who are still crying over Riley and Erin or Mildred and Monsignor.