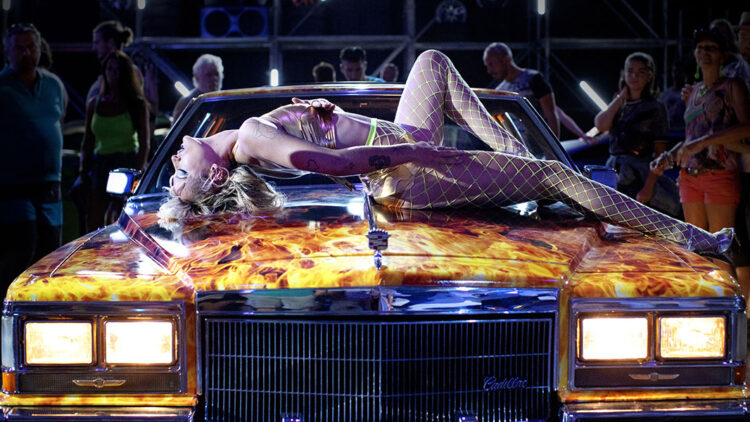 Stuck inside for large portions of this past year, I got a chance to watch a lot of films and shows I hadn’t seen before, digging into the depths of my growing watchlist to unearth some new favorites (hello, Manhunter). Thankfully, we also had the opportunity to watch some new horror movies and series as well, with cinemas opening up again and streamers finding new ways to engage us (three weeks of Fear Street?!) as the threat of the worldwide pandemic raged on.

Suffice it to say, I watched a ton of great horror stuff this year, which made making this list rather challenging. At the end of the day, I chose the ones that really hit me in the gut, that made me feel something.

I actually saw this movie back in 2019, when it screened as part of the Toronto International Film Festival’s Midnight Madness program. I’ve been anxiously awaiting its North American release ever since. Sadly, because of COVID, its debut kept getting moved, with it finally having a limited in-theatre run last January before landing on VOD.

The feature directorial debut of England’s Rose Glass, Saint Maud explores how far a person will go to repent their sins. With an ending I’m still thinking about two years later and an extended scene of a woman walking around with nails in her shoes, it’s even grosser than you might expect. It’s also gorgeously shot and gay as hell. I just pray that Rose has something else just as harrowing coming for us, and soon.

I wrote about this Canadian film during my coverage of TIFF. I called it one of my top films of the fest along with my No. 1 film on this list. Now, at the end of the year, I can safely dub it my favorite sci-fi film of 2021.

Directed by Cree-Métis filmmaker Danis Goulet, Night Raiders is a dystopian drama that sees children ripped from their homes to be taken to specialty schools where they will supposedly be given a brighter future (yeah, right). An allegory for the residential schools that stole the lives of many Indigenous children and continue to be a source of trauma in my country, this film is a powerful reminder of our dark pasts. It also offers up a vision of the future where Indigenous folks not only get a chance to exist, but are the leaders and change-makers we need.

This is a movie that really snuck up on me. I was initially intrigued by the cast, which includes Richard Jenkins, Steven Yeun, June Squibb and my personal fave, Beanie Feldstein. And then I heard that it was less of a family drama and more of a holiday-set horror film. Of course, my white upper-middle-class ass was in.

It may bore some gorehounds with its extended dialogue sequences. But there are pieces of sound design in The Humans that got under my skin like nothing else this year. With a decrepit set that sometimes appears to have a life of its own (or is that just your mind playing tricks on you?) and seemingly haunted corridors, it is a true haunted house film. But instead of literal ghosts, the characters are stalked by the dark shadows of regret. At the very least, I know I will have nightmares about this movie for countless Thanksgivings to come.

Every time Nia DaCosta’s Candyman kept getting pushed back, my heart sunk as it was one of my most anticipated movies of 2020. With each release date rescheduling I kept saying to my friends, if they aren’t prepared to just slap it on VOD, it must be a good sign, right? It must be something worth saving for a big horror release, right?

When I finally saw Candyman last August, I was delighted to learn that my suspicions were correct. While not every single element worked for me (CGI bees can’t compare to the real deal), there were some really artful (pun intended) choices that made it feel both in conversation with (see: the amazing upside-down opening) and in contrast to the original film and the Clive Barker story before it. I especially loved the performances by Michael Hargrove, Colman Domingo (who also killed it in another top movie of 2021, Zola) and Teyonah Parris (my fave from 2018’s If Beale Street Could Talk), not to mention the return of—spoiler alert—the original Candyman himself, Tony Todd.

I am a huge fan of the Charles Lee Ray universe as a whole, especially the latter entries in the series. Yes, that includes the truly incredible Bride of Chucky. Thanks to the genius of big daddy Don Mancini, Chucky has become one of the most interesting and innovative horror villains of all time. Each new installment subverts different subgenres while also maintaining the character’s killer camp quality.

Introducing some new young (and queer!) characters to go up against the ol’ Good Guy’s growing army (not to mention returning series stars Jennifer Tilly, Fiona Dourif, Christine Elise and Alex Vincent), Chucky takes the already ahead-of-its-time franchise to new heights with some really creative death sequences and thoughtful commentary on gender identity, sexuality and found families. Every episode left me wanting more (in a good way). I can’t wait to see what’s in store for us come Season 2.

I know, I know. You’re thinking that I’m reaching calling this movie, which sees Kristen Stewart play Princess Diana, a horror film. But if you’d actually seen it, I know you’d agree.

Taking place over Christmas in 1991, Pablo Larraín’s “fable from a true tragedy” paints a sad and scary portrait of what life must have been like for this former member of the royal family before she clawed her way out. Stewart’s Diana is constantly haunted, with rumors of her husband’s extramarital affair hanging over every moment. Plus the literal ghost of Anne Boleyn turns up in places where even the paparazzi can’t reach her. Then there’s the scarecrow that she visits throughout the film. It’s a grim touchstone from her childhood that serves as a reminder of the targets on her back. And this is all set to a truly chilling score by Jonny Greenwood.

Spencer ultimately has a happy ending, but I sobbed through most of the film, including those final moments. While most horror villains are figments of someone’s dark imagination, Diana’s monsters were not only real but are still in a place of power.

Do you ever watch a show and feel like it was tailor-made for you in a lab? That’s how I feel every time I tune in to Yellowjackets on Showtime.

Sold as a female-driven Lord of the Flies with a ‘90s twist, I was drawn to this show due to its stacked main cast (Christina Ricci, Melanie Lynskey AND Juliette Lewis) and the fact that pilot was going to be directed by one of my fave genre directors Karyn Kusama (Jennifer’s Body, The Invitation). But the show is even better, weirder and queerer than I could have dreamed. Each new episode surprises me with more gore, more drama, and more perfectly timed needle drops. I mean, Alanis Morissette, Liz Phair, Hole, PJ Harvey, Wilson Philips, Peaches—the list goes on!

Yes, we still have four episodes to go in Season 1, so maybe this high ranking seems slightly premature. But those first six episodes were truly more shocking and original than most horror movies I’ve seen this year, with creators Ashley Lyle and Bart Nickerson slipping one past the goalie every single time.

This is a bit of an emotional pick for me—not just because I relate to some of the themes it touches on (fellow depressed girls, I see you). I also truly regret not seeing it in theatres over some of the other fall tentpoles.

The Night House follows a grieving wife (the excellent Rebecca Hall as Beth) who stays up at night drinking and pondering why her seemingly happy husband Owen (Evan Jonigkeit) wanted to take his own life. What starts as a familiar horror tale of a woman in deep mourning slowly turns supernatural as she discovers a double of her house, which holds some dark secrets about both Owen and Beth herself.

Sad, scary and extremely atmospheric, The Night House has stayed with me for months. I can absolutely see why director David Bruckner (The Ritual) and writers Ben Collins and Luke Piotrowski (Super Dark Times) were brought on to do the new Hellraiser. These guys clearly know how to toe the line between pain and pleasure.

I have a love-hate relationship with Mike Flanagan. While I absolutely adore Gerald’s Game, Ouija: Origin of Evil, The Haunting of Hill House and The Haunting of Bly Manor, I felt nothing for Doctor Sleep, Oculus and Hush. This, combined with my utter hatred of religion, made me weary to even start Midnight Mass. But my God, I’m glad I did.

A thoughtful and tragic exploration of faith of all kinds, Midnight Mass fuses Flanagan’s signature sensitivity with classic vampire lore and Christian text. The result is, I think, Salem’s Lot meets Shirley Jackson. It features a community of lost souls drawn to a mysteriously magnetic and miracle-making young priest (a magnificent and, honestly, dead sexy Hamish Linklater as Father Paul). I know reformed and still practicing Catholics who have complicated feelings about it. But it felt almost revelatory to this atheist who struggles with her mortality and morality on a daily basis. And yes, it got me listening to Neil Diamond again (and yes, he rips).

I have written about Julia Ducournau’s follow-up to Raw a few times this year. First, with my review following the film’s premiere at TIFF back in September. Then again when I did my top picks of the fest. But I could keep talking about this film forever.

While 2021 has often been about comfort watches, I find myself most fulfilled by films that challenge me. No film did that more this year than Titane. Inviting us in with the provocative promise of seeing a woman (Agathe Rousselle as Alexia) get impregnated by a car, Ducournau takes a hard turn into the heartfelt with the film’s second half. I laughed, I cried and I squirmed watching the story unfold. Ducournau, Rousselle and Vincent Lindon (who playing grieving dad and firefighter Vincent) led me on an unpredictable yet heartfelt ride. I never quite knew where we were going next.

I get why some folks don’t enjoy this film. But I thought it was a shining beacon of hope in a sea of remakes, sequels and prequels. I truly hope that it gets some awards attention this year. But if it doesn’t, at the very least we can be assured that there is a genre filmmaker out there who will continue to shock, surprise and subvert our expectations, whether we like it or not.