‘Night of the Bastard’ is Derailed by Amateur Performances [Review] 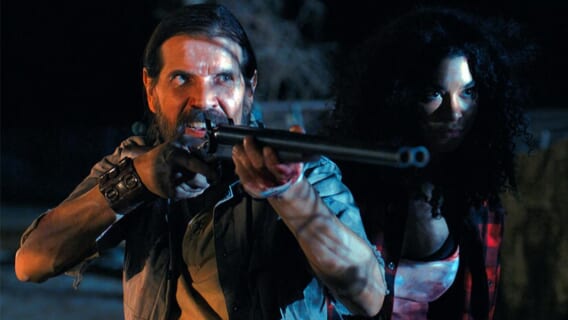 I have a soft spot for films detailing the murderous exploits of satanic cults. So, I was keen to check out Night of the Bastard as soon as it showed up on my radar. Unfortunately, I didn’t find as much to like about it as I’d hoped. While the film delivers on the satanic cult front, the quality of the presentation leaves much to be desired. It seems director Erik Boccio is setting out to recapture the magic of noteworthy satanic panic efforts from the grindhouse era. And while I admire the effort and attempts to pay tribute, the paper-thin narrative, amateur performances, and persistent absence of logic kept me from really connecting with Night of the Bastard.

The film follows Kiera (Mya Hudson) and her friends as they make the inexplicable decision to go camping in the desert, miles from civilization. When her friends are killed at the hands of a bloodthirsty cult, Kiera takes refuge in the home of Reed (London May), a lonely recluse who lives nearby but remains largely detached from the outside world.

Though this flick didn’t really work for me, I can say that it has the skeletal outline of an enjoyable cinematic effort from the heyday of exploitation cinema. However, the execution leaves much to be desired.

The core cast is made up of fairly green talent. I suspect that everyone was giving it their best. But no one turns in a particularly believable performance here. Showings, like we see in Night of the Bastard, would suffice for a community theater production. But, they feel out of place in a feature film. We see characters spit out dialogue without any conviction, making most of the spoken exchanges fall completely flat. The performances serve to derail sequences that should be suspenseful or intense, making scenes that would otherwise read as ominous seem laughable.

Sadly, the film’s issues go beyond a cast without a great deal of experience. For instance, the fight choreography is really challenging to watch. Battle sequences frequently cut away or obscure the action. When we do see cast members connect in a tussle, it looks staged and anticlimactic.

Making matters worse, the sound design is also quite wonky. When someone punches, slaps, or kicks, the intensity of the impact doesn’t match the volume of the attack. Something like this might be minor in a film where every other facet worked as it should. But there are quite a few hurdles that kept me from really connecting with Night of the Bastard.

Also See: Satanic Panic Attack: 5 Unholy and Unappreciated Gems To Mess You Up

Another major concern is the lack of logic within the narrative. In one memorable instance, the reclusive Reed smashes a light bulb over a cult member’s head in an attempt to escape captivity. And it works. That sequence is something of an insult to the viewer’s intelligence when considering light bulbs are made from the most fragile glass on earth. They aren’t designed to sustain impact. So, the idea that one could be weaponized like a blunt object is more than a little preposterous.

In another questionable sequence, a cult member is supposed to be strangling Reed but the satanist’s arms aren’t around Reed’s throat. They are more or less resting near his shoulders. In another equally distracting series of events, the protagonists repeatedly forget to lock the front door, yet the cult members remain unable to gain entry, to Reed’s home, as if it is an impenetrable fortress.

Additionally, there are some confusing choices from a character development perspective. Much time is spent establishing Reed’s obsessive-compulsive tendencies early in the narrative. We see him straighten a piece of wall art multiple times after we make his acquaintance. Later, Keira calls attention to said tendencies. But that facet of his persona never factors into the storyline. I am guessing the idea was to give depth to the character. But much like the offhanded revelation that Reed has never had a long-term relationship, his OCD serves no bearing on the narrative. If these traits weren’t showcased in such a ham-fisted fashion, they could have worked to endear the audience to Reed and give him nuance. But as it’s presented, the attempts at character development felt a lot like needless filler in an already lean runtime.

If you’re keen to check it out for yourself, Night of the Bastard will bow in select theaters and on VOD on Friday, January 13, 2023.

This tale of a satanic cult is hindered from start to finish by amateur performances.