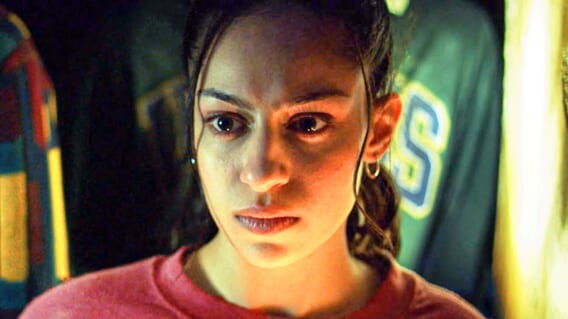 Subterranean horror is one of my favorite sub-genres. Setting a film beneath the earth’s surface has the potential to lend an extra layer of claustrophobic terror to the proceedings. And I am pleased to say that Deep Fear (which is set in the Parisian catacombs) is a primarily effective chiller that makes great use of an atmospheric locale with a dark past. (For anyone not familiar, the popular tourist attraction is a mass burial site that houses the remains of at least 6 million people).

Deep Fear takes its protagonists on a wild and unpredictable journey that sees Sonia (Sofia Lesaffre) and three of her friends set out to spend a day exploring the catacombs. But rather than take a sanctioned tour, the pals opt to go rogue (i.e. trespass) and navigate uncharted territory. What starts out as a carefree adventure quickly turns into a nightmare with deadly consequences.

Deep Fear is a chilling horror thriller that makes the most of its 80-minute time by almost immediately placing its protagonists in various forms of peril. Director Grégory Beghin ratchets up the tension early and often, effectively chronicling the utter panic one might expect to feel when lost and alone in a dark, unfamiliar place. That sensation is further underscored by the underlying realization that the leads are so close to the civilization that exists above ground. But they might as well be a million miles away, seeing as they are lost and alone and far enough down that no one can hear their cries for help.

Aside from effective tension building, Deep Fear also scores points by keeping the audience in the dark regarding exactly what Sonia and her pals are up against. Are they simply lost and afraid or is something more sinister afoot?  I found myself asking that very question at the beginning of the third act.

What really impressed me about this French horror film is that prior to any reveals regarding what evil lurks below our feet, the catacombs function very much like a malevolent presence, presenting a variety of harrowing circumstances that come together to create an adversarial dynamic between the protagonists and the setting in which they find themselves. That makes the eventual reveal when everything finally shakes out fairly unexpected.

Some viewers might argue the twist comes out of left field or even that the first two acts feel like a different film than the third. And to be fair, those criticisms aren’t entirely unfounded. However, I had a great time with Deep Fear and I think there are plenty of atmospheric scares to make up for any missteps.

What are the missteps? Well, the details surrounding the reveal are a bit far-fetched; the lack of light in some of the action scenes is distracting, and there are a couple of sequences where the editing feels a bit wonky. But if you can take all that in stride, I think you may mind that there’s plenty to enjoy about Deep Fear.

All in all, Deep Fear makes effective use of a setting that feels tailor-made for a horror film. Moreover, the flick is thrilling, unpredictable, and doesn’t outstay its welcome. Deep Fear is now screening via Fantastic Fest and will land on the Screambox streaming service November 1.

Deep Fear is a bit clunky at times. But effective tension building and the subversion of expectations make it worth a watch.