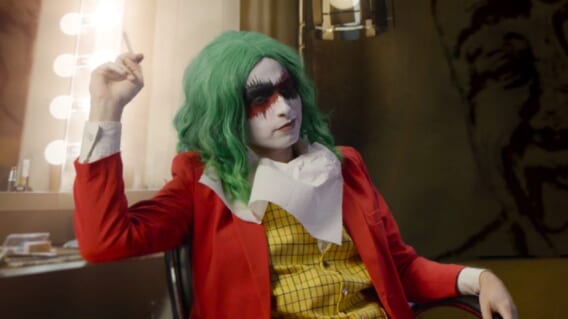 When I saw there was a film in the Toronto International Film Festival’s Midnight Madness program called The People’s Joker, I rolled my eyes, my grossly exaggerated gut reaction coming from my general boredom with the state of superhero cinema. But this fun, fearless film is not another unnecessary addition to the already oversaturated comic book canon. In fact, I would go as far as to say that it’s the most interesting film set in Gotham City since Joel Schumacher’s Batman & Robin.

Think Schumacher’s Batman films are the lowest point in the caped crusader’s ongoing saga? Can’t stand the thought of Lady Gaga playing Harley Quinn? Didn’t bother seeing Birds of Prey? If you answered yes to any or all of these questions, then the campy and unapologetically queer The People’s Joker will likely not be for you. But if you, like me, are sick of seeing yet another unimaginative, heteronormative superhero film with no real stakes or surprises, Drew’s subversive satire could renew your interest in the subgenre.

Without spoiling too much of its oddball magic, The People’s Joker is a multi-media mashup that also manages to also be a moving coming-of-age story. In her ambitious feature debut, director, co-writer, editor, and star Vera Drew uses heroes and villains we know and love, as well as a cavalcade of filmmaking techniques (everything from green screen to 2D animation), to illustrate her journey towards embracing her identity as a trans woman.

The People’s Joker feels like both a direct parody and rewriting of Todd Philip’s Joker (2019). Drew plays an aspiring comedian (also named Vera) who has always struggled to fit in and dreams of being on a famous sketch comedy TV show (an obvious stand-in for Saturday Night Live). Although Vera has known she was trans since she watched Batman Forever in theatres (while her peers wanted to be with Nicole Kidman’s Chase Meridian, she wanted to be her), she doesn’t start to really live her truth until she connects with other stand-ups starting out (including Nathan Faustyn as a slacker Penguin) and begins making what she thinks are her first “happy memories.”

Twisting what has become an incel anthem into a tale of queer empowerment, The People’s Joker confronts the problematic parts of the Batman universe (see: the toxic relationship between Joker and Harley) as well as the comedy community (cue jabs at Louie C.K. and Bill Cosby). Sometimes it can feel like The People’s Joker is trying to say too much at once. But considering how hard it can be to break through as a marginalized person in fandom and other creative spaces, you can’t blame Drew for wanting to take this opportunity to put it all on the table.

I hope Drew, along with co-writer Bri LeRose, gets opportunities to further expand this wild world. As they confirmed in my recent interview with them, there are already plans for a horror-themed sequel. At the very least, I just want this film to get released after it got pulled from the Toronto International Film Festival lineup “due to rights issues.”

The People’s Joker may not be for everyone. But it certainly has the potential to empower those who struggle to feel seen in any of the current multiverses. At the very least, it should serve as an iconic origin story for Drew, whose natural star power shines brighter than any bat signal I’ve seen to date.

The queerest film set in Gotham City since Joel Schumacher’s Batman films, The People’s Joker is a welcome twist on superhero tropes and heteronormative storytelling.