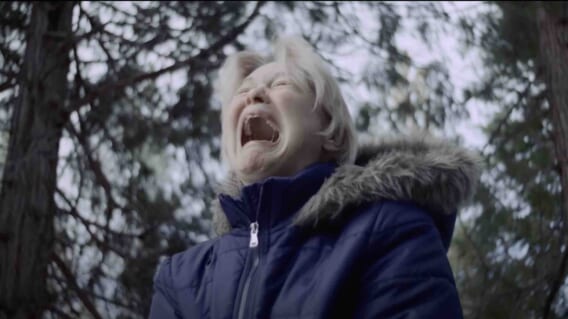 To succeed at captivating and frightening its audience, a horror film needs to reel in the viewer and make them forget they’re watching a movie. Sadly, Nix never manages to achieve that conceit. What we get, instead, is a fairly pedestrian affair with lofty aspirations and mediocre execution.

The film sees a family camping trip interrupted when young Tessa (Angelina Karo) vanishes without a trace. From that moment, Tessa’s surviving family members find themselves frozen in time, unable to move forward with their lives. 25-years-later, the family members must, once again, come face-to-face with the malevolent force that took Tessa.

Nix sets out to be a meditation on loss and the destructive power that grief wields when not properly channeled. But with much more effective films already having tackled similar thematic elements, Nix kind of falls flat by comparison.

Among the challenges I had with Nix, one of the most problematic is that the relationship dynamic between the characters often feels unrealistic, particularly in the ‘past’ and ‘future’ timelines that bookend the film. It’s clear that director Anthony C. Ferrante was keen to paint a portrait of idyllic and picturesque family life in the opening, only to interrupt that with a tragic and unsettling turn of events. But the picture-perfect world he crafts doesn’t feel like real life. As such, I was left feeling underwhelmed. I know I was supposed to feel impacted by the blow this family is dealt. But I didn’t feel it to the extent I assume I was meant to. And that sense of disconnection from the central characters and their relationship dynamic stayed with me throughout the film.

One of the other obstacles I encountered with Nix is that the acting is a little clunky. Some of the characters come across as overly enthusiastic to the point of being unnatural. I am a massive fan of Dee Wallace (who plays the matriarch in the ‘present’ timeline) but she seems like she is in a different film than the rest of the family. Her performance is very exaggerated, to the point of being distracting. Some of the showings are more serviceable than others. But several of the key players detract from the narrative with performances that aren’t convincing. And that’s a shame because the film gets some things right. The set design, cinematography, and score are all effective. And Ferrante does successfully establish a tense and atmospheric vibe a couple of times throughout the picture. However, the finished product doesn’t come together well enough to be captivating.

The film almost feels as though it has assembled a bleak tone alongside thematic elements related to grief and loss, as if that is all that one needs to produce an elevated horror offering in the vein of Hereditary or The Lodge. However, both the aforementioned films have stellar performances that help the theme congeal. In this case, the assembly of the collective pieces leaves a lot to be desired. The end result feels a little derivative and lacks any true cohesion.

The picture’s antagonist appears to be intended as a metaphor for the dangerous nature of unprocessed grief; a commentary on the way loss can live inside us like a parasite and destroy a person from the inside out if allowed to stagnate. And while grief certainly tore apart this family, the way the metaphor is executed feels ham-fisted. It’s laid on a little thick, to the point where it doesn’t feel subtle or nuanced.

Ultimately, Nix didn’t work for me. However, if you are keen to check it out for yourself, you can do just that beginning September 27th when the film comes to VOD!

Distracting performances and a lack of cohesion derail what the film gets right.