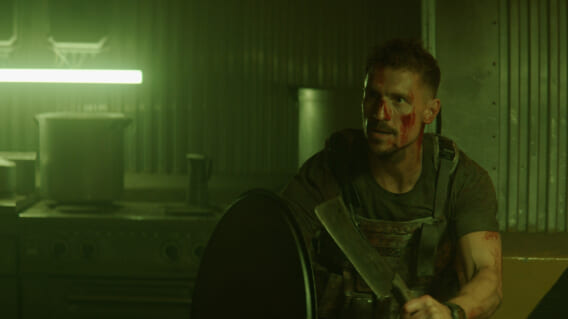 Most fans will agree that Dog Soldiers is Neil Marshall’s best film. Marshall clearly thinks so too, because his latest effort, The Lair, clearly borrows heavily from Dog Soldiers. He gives us a film about a squadron of soldiers in an isolated rural area being assaulted by monsters and having to resort to desperate measures in order to survive. The influence of his early work is undeniable.

The Lair opens with Sinclair (Charlotte Kirk), an aircraft pilot, being shot down in Afghanistan before being assaulted by the Taliban. After fighting her way through the insurgents, she discovers a hidden underground bunker where the Russians conducted illicit experiments in order to create unstoppable monsters to be used in warfare. Sinclair must try to navigate the bunker while avoiding both the Taliban and the creatures lurking in the shadows. There’s even a particularly nail-biting sequence as she was forced to crawl through a tight ventilation shaft in order to avoid detection.

Also Read: ‘Powertool Cheerleaders Vs The Boyband Of The Screeching Dead’: The Title Says It All [FrightFest 2022 Review]

Sinclair eventually escapes and joins forces with a square of outcast American troops. From there, The Lair essentially becomes Dog Soldiers in a desert. The troops struggle to make it through the night as they are constantly swarmed by monsters from all directions. Some viewers will no doubt be thrilled to see Marshall effectively recreating his earlier classic with a significantly larger budget, while others will find it all a little too familiar.

However, while the werewolves in Dog Soldiers were played by men in suits, the monsters here are created through an impressive mixture of CGI and physical props, making them some of the most memorable creatures to have appeared in any of Marshall’s films to date. At one point, the squad’s medic dissects one of the creatures to discover just what exactly it really is. The beast’s insides looked so realistic that you will swear you can smell its guts as they’re pulled from its chest.

Also Read: ‘PussyCake’ Is One Of The Grossest Movies Of The Year [Review]

In terms of performances, Kirk was generally fine as Sinclair. While the way in which she heavily enunciated her lines in order to get her points across did seem forced at times, Sinclair was still believably a hardened soldier with a grudge against the monsters who literally tried to eat her for dinner. However, Leon Ockenden also appears as Jones, a Welsh soldier who speaks with what could be one of the worst attempts at a Welsh accent you are ever likely to hear. Even several Welsh people at FrightFest complained about the accent after the screening, so we can only hope that Marshall hires an actual Welsh actor next time. Jonathan Howard was more convincing as Hook, the embittered leader of the platoon who strives to do whatever it takes to bring his soldiers home.

After losing many good men throughout the night, the remaining troops decide to take the fight to the creatures’ hideout instead of waiting for the monsters to come to them. This leads to an explosive and exhilarating third act where the human characters and their monstrous antagonists desperately fight to annihilate each other. Viewers craving both gore and fun action set-pieces will no doubt be satisfied by the climax.

Overall, The Lair served as the perfect FrightFest opening film. It was a fun, fast, and action-packed adventure that brilliantly encapsulated the feelings of excitement and exhilaration viewers will no doubt feel as they prepare to watch horror films in Leicester Square for five days straight. Comparisons to Dog Soldiers are inevitable. But this is still a suspenseful thrill ride that you cannot afford to miss.

The Lair is an explosive horror adventure which further cements Neil Marshall’s position as one of our generation’s finest action horror filmmakers.