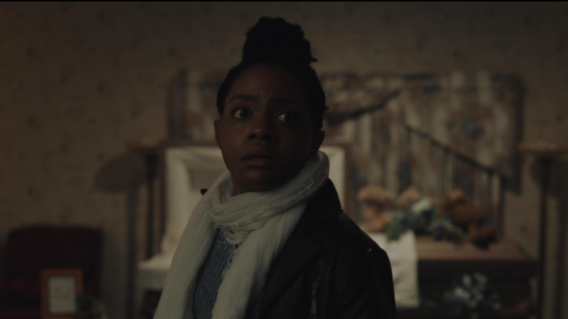 Pandemic horror films are a dime a dozen these days. Studios and filmmakers want to offer their take on the last few years and capitalize on our ongoing paranoia about existing in a COVID-19-ravaged world. They often feel exploitative and surface-level, using the pandemic to create a zombie-filled world or a vague investigation of isolation. But, director Andy Mitton (The Witch In The Window) has proved that a good, effective, sad, and scary pandemic film is possible with his new film The Harbinger, which had its world premiere at the 25th Fantasia Festival.

In The Harbinger, the pandemic is in its early, deadly days. Monique (Gabby Beans), her brother (Myles Walker), and their dad (Raymond Anthony Thomas) have created their own bubble in their family home outside of New York City. They get groceries delivered, they wipe down everything with antibacterial wipes, and chat about the before times with twinges of sadness and resignation; this is their new normal.

Then, Monique gets a call from her former college roommate Mavis (Emily Davis). Mavis is struggling with nightmares, as illustrated in the cold open, and needs Monique’s help. After Mavis saved her life in college, Monique, against her family’s wishes, speeds into the city to be with her friend.

In the city, people sidestep and avoid each other like, well, the plague. Monique arrives at Mavis’ apartment and in a touching scene, they each remove their masks to reveal wide smiles at their unexpected reunion. Then, they tentatively hug. Mavis bursts into tears, declaring that’s the first time she’s touched a person since the pandemic began. That alone is enough to slice you open. We all remember that first hug with a family member or friend after isolating for months.

Then the fear really kicks in. Mavis explains that she’s been having dreams that last for days. She’s unable to wake up from them, no matter how hard she pinches herself, gauges her skin, and bites open her lips. In the dream, a shadowy figure gets closer and closer. These dreams expose Mavis to the traumas of her past and put her through the mental wringer. While Monique is doubtful, she quickly learns that this figure, called the Harbinger, is very real and very ready to collect more victims.

The creature design of the titular Harbinger is a little on the nose. He’s basically a plague doctor, donning the classic long-nose mask that’s synonymous with death and pestilence. Yet, there’s something also very cheeky about that choice. Of course this entity took on this appearance during a global pandemic. It’s a creature with a twisted sense of humor and a desire to wreak as much havoc as possible on his victims’ psyche.

Monique and Mavis race to find out what they can about this figure and if he’s real or a figment of COVID-induced paranoia. Like Nancy from A Nightmare On Elm Street, the two women get ready to fight for their lives on the demon’s territory: their dreams.

Beans shines as Monique, a rare example of a supportive horror friend that doesn’t immediately dismiss her friend’s fear. While she is reasonably doubtful, she never leaves Mavis’ side; she won’t abandon someone who helped her out of a dark place. She’s firm, kind, and a badass.

This is Mitton’s try-out for A Nightmare On Elm Street reboot and he’s more than proved he deserves that honor. He deftly weaves through reality and dreams, constantly disorienting the viewer right when they think they’ve gained their footing. Creating dream logic is a challenge, and Mitton creates it with ease. He combines that with a heart-breaking portrayal of what it was like, and still is like, to live through a pandemic without the privilege of regular human contact. With The Harbinger, Mitton illustrates how you can make a scary yet sensitive pandemic horror film that cuts to the core of the hell that has been the last two years.

With ‘The Harbinger’, Andy Mitton illustrates how you can make a scary yet sensitive pandemic horror film that cuts to the core of the hell that has been the last two years.