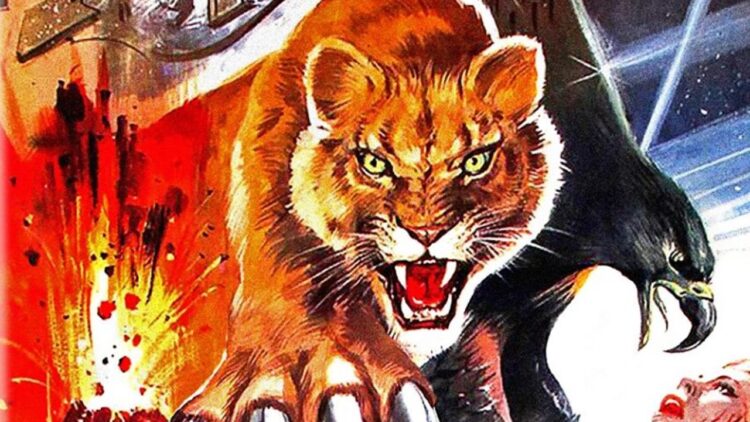 After the success of director William Girdler’s Jaws-of-the-woods film Grizzly (1976) the decision was made to keep the animal exploitation train a runnin’ with Girdler delivering another man-vs-nature picture a year later, Day of the Animals (1977). Grizzly offers only a couple of lines of dialogue about humanity’s encroachment on nature whereas Day of the Animals offers no such subtlety – here, the depletion of Earth’s ozone layer causes all animals (and some people) at high elevation to go insane, prompting aggressive behavior and unprovoked attacks. Girdler’s film is populated with several creatures that are trainable enough to “attack” actors on camera – birds, cougars, bears, dogs – and unlike most of Grizzly these bouts are better staged and edited. The film doesn’t quite know what to do once the plot has been set, however, leading to a largely dull feature that exists in infamy for one great reason: co-star Leslie Nielsen, long before his days of comedy, delivering a batshit performance that ends with him wrestling a bear.

An opening crawl informs viewers of Earth’s rapidly eroding ozone layer before introducing us to Steve Buckner (Christopher George), a hiking guide in Northern California, as he boards around a dozen tourists into a helicopter which will fly them up to Sugar Meadow for a hike that lasts a few days. Everyone gets a proper introduction though only a few receive any real development. The most useful among them is Daniel Santee (Michael Ansara), a Native American guide and the only one of them “in tune” with nature. The most outspoken among them is Paul (Leslie Nielsen), an advertising exec with a bad temper that only worsens as their journey continues. Their descent brings encounters with every predator in the woods, and many of those on the hike wind up on the losing side against Mother Nature.

Eventually the government determines that every animal at an elevation of 5000 feet and above is experiencing aggressive behavior due to the increased radiation and they broadcast this information over the radio, which is then picked up on by some of the hikers. By now the bonds between the hikers have started to break down and the large group splits off into two smaller factions: one led by Buckner and the other led by Paul. You can imagine which group has the greater success. With no clear solution in sight the groups continue their descent of the mountain, hoping to reach a level where the animals are back to normal.

At times this feels less like a film and more like a series of vignettes featuring hapless hikers being attacked by hordes of hot-tempered animals. One woman is assaulted by hawks until falling to her death. Wolves try to nab a few sleeping campers. Cougars do the same. Even dogs, man’s best friend, attack with the same lack of reservations. Not all these animals at once, of course – carefully choreographed packs of whatever beasts were on set that day. But nothing tops the grizzly bear (actually a cinnamon bear) that fights Leslie Nielsen, that bear vs. bare-chested maniac bout doesn’t last long but you gotta admire the man’s attempt. The camera work in Grizzly tended toward frenzied and choppy but Girdler and his editors found a way to make these attacks sell better, with more wide shots and legit skirmishes – though I concede it’s likely much easier to control a cougar compared to a massive brown bear.

Outside of these moments the film is a bit of a slog. The only urgency to the story is descending the mountain – since there isn’t a thing anyone can do about the ozone hole – and, as I said, that descent is a strung-together series of people being attacked. Not the worst thing to see if you like this type of film but it can feel redundant after a while. Being a fan of this cast helps, too, so if you dig seeing actors like Christopher George, Richard Jaeckal, and Leslie Nielsen the film will hold some additional appeal. Girdler may not have always achieved the ambitions he set for his films but it isn’t for lack of effort and that quality does show through on the screen as well.

Just as with Grizzly Severin Films is reissuing a title previously released by Scorpion Releasing, this version featuring a new 2K scan of an inter-negative. The 2.35:1 1080p image has a beautiful ‘70s aesthetic, with rich film grain and that lovely soft-around-the-edges anamorphic lensing. Colors are bright, blacks are mostly dark, and the camera does everything to drink in the beautiful California landscape. Quality seems to take a bit of a dip in the second half but this isn’t exactly demo-quality material to begin with – to be expected. I didn’t own the Scorpion release and can’t speak with much authority but I hear the most evident difference is a slight difference in brightness.

A perfectly serviceable English DTS-HD MA 2.0 mono track carries the defect-free audio – no hissing or pops to be heard here. Lalo Schifrin’s score is minimal but what is presented sounds excellent. Subtitles are available in English SDH.

While I tend to enjoy Girdler’s work this is one of his lesser efforts, with the only true entertainment coming from Leslie Nielsen’s unhinged character. The animal attack scenes aren’t very convincing and with not much of a story there isn’t much to go on here. Severin’s release offers upgraded a/v and several new interviews.