Written and directed by Mike Flanagan

Every once in a while we get lucky. An indie project that we know very little about will arrive in the mail and, with the right balance of an intelligent script, completely natural actors, and a director who gets that we don’t need absolutely everything explained in minute detail, proceed to knock our socks off. Absentia is just such a film.

Tricia (Bell) is a woman at the crossroads. Her husband, Daniel, disappeared seven years ago, and she now finds herself pregnant by another man and ready to move on … and out of the house she and Daniel shared. The neighborhood has been steadily declining with petty thefts occurring on a regular basis in the surrounding homes, and Tricia knows it’s not likely to improve anytime soon. Her wayward sister, Callie (Parker), arrives as the film opens, eager to also put her past behind her and help Tricia with the process of packing up and having Daniel declared legally dead – in absentia. But it doesn’t go smoothly. It’s not long before Tricia begins having visions of Daniel (a very pissed off Daniel, menacingly portrayed by Morgan Peter Brown) lurking around the house, which her therapist brushes off as nothing more than lucid dreams due to her guilt and conflicted emotions about moving forward with obtaining a death certificate for her missing spouse.

Callie, too, begins seeing things in the spooky old tunnel that connects Tricia’s street with a nearby park. A man she assumes is nothing more than your typical homeless guy mutters nonsense about “them” being asleep, enabling him to get away, and asks her to get in touch with his son to let him know he’s still alive. The audience is only given enough background information on Callie — something about drugs and run-ins with the law — to make us wonder whether the things she’s seeing are real or just another fantasy in the long string of hallucinations she’s experienced over the past several years. Throw in Missing Persons Detective Mallory (Levine), whose concern for Tricia might be a bit more than mere professional courtesy, and we’ve got a tense, unnerving powder keg of a situation that is sure to keep you on the edge of your seat and guessing as to what exactly is going on here. Callie starts putting the pieces together, but of course because of her history no one takes her seriously. Even we, the viewers, question the information we’re given, which is the beauty of Absentia: its ambiguity and willingness to leave a few question unanswered.

And that is all I’m going to divulge about the plot. As mentioned at the outset, Absentia came to me shrouded in mystery, and it should remain that way for you, too, as much as possible. Is it a ghost story? A psychological thriller? Yes and no — and a whole lot more. Ancient urban legends come into play and mess with the characters’ (and the viewers’) heads. Writer/director/co-producer/editor Flanagan has accomplished what at times seems to be the impossible: crafting an indie film in such a way that its budget is mostly irrelevant. And that is because he understands the importance of the story. The characters actually speak dialogue as conversation, not the reciting of lines on a page. Nothing feels familiar or rehashed; it’s a breath of fresh air in the stale indie scene that seems stuck on found footage, weekend getaways gone awry, and home invasions (although there is a tiny element of that here, albeit not in the way we’ve been conditioned to think of it). When the opening credits began, I admit to some concern upon seeing that Flanagan served as his own editor, a situation that with young directors more often than not results in a film that’s a good 20 minutes (at least!) too long with scenes that drag on and on. But I have to say he kept it tight, kept it moving, and, most importantly, kept my interest for Absentia‘s full 87-minute runtime.

No doubt a large part of Flanagan’s success can be attributed to the excellent cast he assembled. All are basically unknowns (except for a pivotal appearance by the always great Doug Jones), and while the start is a little rocky with leads Bell and Parker finding their way and fine-tuning their chemistry, by the time the shit is hitting the fan, their sisterly bond is palpable … and extremely touching. The men are predominantly secondary players, but Levine hits all the right notes, and Justin Gordon as an additional detective on the case adds the perfect amount of authenticity to what could have been your basic stereotypical cop role. And they all look like you or I — regular people. In this era of hot-young-cast-a-mania, it’s a treat to see such real looking actors. Nostalgic even, like in the 1970’s, which Absentia qualifies as a throwback to. You know, back when plot and mood and atmosphere mattered, not CGI effects and big explosions or shaky cam and quick cuts.

As for the effects in Absentia, less is definitely more. And quite effective. Instead of stingers and jump scares, the chills are accomplished with subtlety and restraint … and a helluva lot of imagination. I also really appreciated the score by Ryan David Leack, which drew me in and made me hold my breath at times; however, the person I watched Absentia with felt the opposite. The organ music took him out of the experience and was a negative. A clear example of how subjective certain elements of a film can be.

One thing, however, that we can all agree on is that the thought of a loved one disappearing into thin air is horrific indeed, and Absentia does a good job of taking that idea and amping up the horror element to provide a film that’s both thought-provoking and thoroughly entertaining to the genre crowd. Here’s hoping it finds distribution soon so that the rest of you can enjoy it as much as I did!

Discuss Absentia in the comments section below! 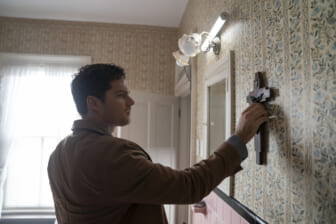