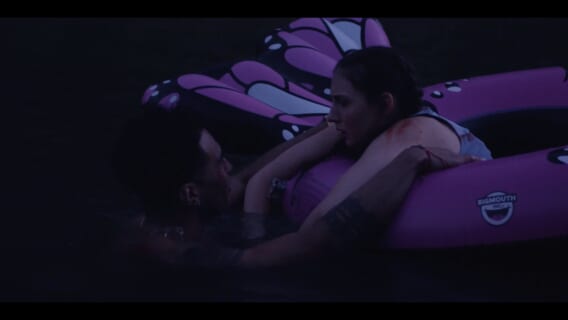 Zac Locke has a long list of producer credits, from Black Christmas (2019) to Country Gold. Paired with his time at Blumhouse, Locke is no stranger to the horror genre. So it makes sense that he’s moving into the director’s chair with his feature film debut #FLOAT. The film also marks the first release from Locke’s micro-studio Rotting Press. This supernatural aquatic horror follows an influencer, her friends, and a force that wants them dead.

The young, beautiful, and full-of-life vlogger Kali and her pals head to the river for their annual lazy river float, the first one since their friend Chuy overdosed and drowned a year earlier. But their partying suddenly takes a dark turn when a mysterious force plunges them into a life-and-death struggle, forcing them to face their own fears as they turn on each other – and proceed to die one by one.

#FLOAT is out now on digital and VOD from XYZ Films.