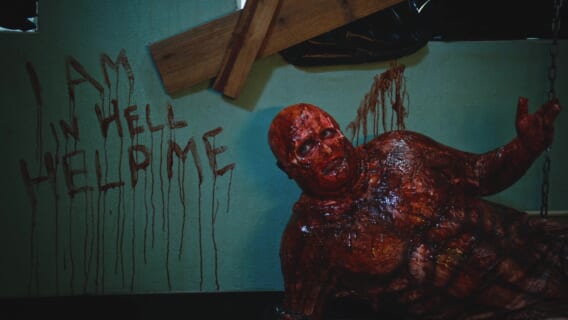 Aaron B. Koontz & Cameron Burns captured horror lovers’ hearts in 2019 with their campy anthology film Scare Package. Each segment was nastier than the next, with video store owner Chad relaying these tales to anyone who will listen. While Chad faced an untimely death in the first film, he’s not done with dropping horror knowledge in Scare Package II: Rad Chad’s Revenge.

When horror guru Rad Chad Buckley’s funeral turns into an elaborate series of death traps centered around Chad’s favorite films, the guests must band together and use the rules of horror to survive the bloody game.

In his review of the first film, Dread Central’s Daniel Baldwin wrote:

“This is a movie by horror fans about horror fans made for horror fans. It is also packed to the brim with some ooey, gooey, wild, disgusting, and/or hilarious practical effects work.”