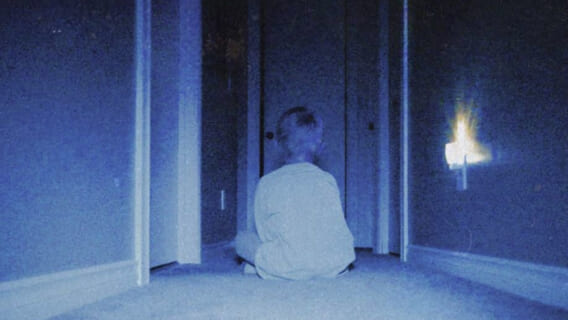 Upcoming indie horror film director Kyle Edward Ball Skinamarink has been making the rounds on Film Twitter recently. It’s generated a ton of buzz since its festival debut this year, but now the film has been illegally uploaded online prior to its wide release. While the prospect of experiencing the film early has its allure, it’s ultimately detrimental to Skinamarink‘s commercial success. The solution? Skip the illegal link and check out Ball’s short film Heck, which inspired the feature. Plus, it’s streaming for free on YouTube.

According to the YouTube description, in Heck, “A little kid wakes up in the middle of the night to the sound of his mom’s television blaring.”

It’s a simple concept but Ball’s execution makes the concept absolutely terrifying. This is not your typical narrative film, but rather an experimental experience that capitalizes on the existential terror of liminal spaces. The young boy is trapped in what seems to be an infinite time loop where he’s unable to leave his house. It’s always nighttime and he’s all alone except for blaring cartoons and a strange entity that seems to haunt his every step.

Heck is a sensory experience, with the sound almost entirely distorted and blaring from an old TV. Any dialogue is whispered by the young boy who searches for his mom in his dark home. Time cards indicate the passage of time and how long this boy has been caught in what he declares in Hell.

The short film captures the strange, uncanny experience of waking up as a child in the middle of the night to the glowing blue light of the TV casting strange shadows and hues across a silent room. Ball is able to capture a very specific feeling with his camera work. This is very similar to the experience of Skinamarink, which is why excited fans should watch Heck.

Hopefully this short will whet your appetite for Skinamarink before its release sometime next year. And if you want more from Ball, take a deep dive into his entire YouTube channel.

What did you think of Heck? Are you excited for Skinamarink? Let us know on Twitter @DreadCentral.

Dread Central is on Google News.