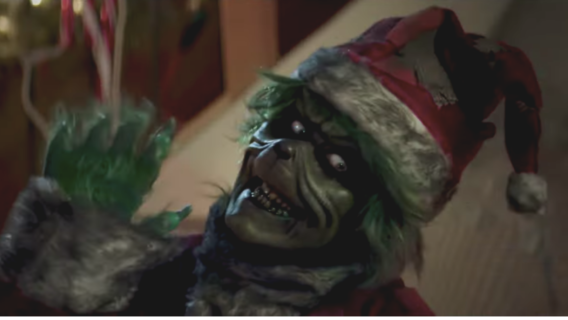 Thanks to Atlas Film Distribution, Steven LaMorte‘s holiday slasher parody, The Mean One, is coming to theaters on December 9, 2022. And we can’t wait to see the Grinch steal lives and Christmas this year.

The Mean One (David Howard Thornton) is a hairy, green-skinned grump in a Santa suit, living on a mountain high above the town of Newville, despising the holiday season. Young Cindy You-Know-Who (Krystle Martin), whose parents were butchered by The Mean One twenty Christmases earlier, is returning to town to seek closure. But when the killer launches a new reign of terror that threatens to destroy Christmas, Cindy finds a bold new purpose – trapping and killing the monster.

In The Mean One, David Howard Thornton (Terrifier 2‘s Art the Clown) once again plays another new slasher icon. Thornton is able to really transform himself not just through make-up, but through his terrifying physicality. Holiday aficionados who think they know the original tale are in for a very big surprise.