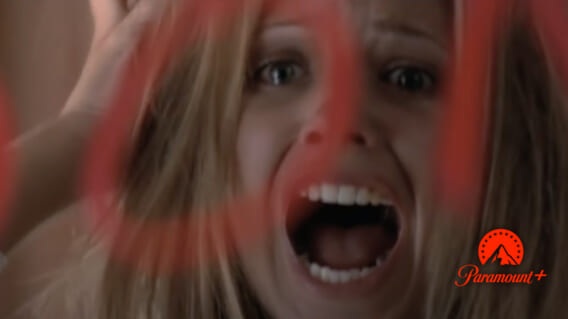 Paramount+ is killing it with their October lineup. The content provider has all sorts of frightful fare in store for you. And I’m pleased to report that the bulk of their spooky programming is being frontloaded at the start of October, rather than dropping throughout the month. If, however, you’re keen for some commentary pertaining to the standout offerings headed your way, we’ve got some thoughts. A lot of them, actually. Scroll down for the full list of titles.

October is the perfect time of year for a return visit to the Event Horizon. This flick is dripping with spooky atmosphere and functions something like a haunted house picture set in outer space. Although the film flopped at the box office and was lambasted by critics upon release, Event Horizon has found its audience in the years since its theatrical debut. A solid cast, epic effects work, and gorgeous set design make this tale of terror in outer space a harrowing good time.

Speaking of a harrowing good time, Paramount+ also has the first four Scream films queued up for your streaming pleasure. Catching up with Sidney, Gale, Dewey, and company is like comfort food for many genre film enthusiasts, myself included. The late Wes Craven (along with screenwriter Kevin Williamson) revitalized the slasher genre with the first series installment, subverting expectations and lovingly sending up slasher tropes along the way. The second outing is just as much fun as the first. And while the third isn’t my personal favorite, there’s still plenty to appreciate about it. As for the fourth, it seems many have finally come around to what amounts to a pretty spectacular follow-up effort. If you’re due for a full franchise rewatch, the fifth installment is also available with the Showtime add-on.

While we’re talking about slasher franchises that kicked off in the ‘90s, let’s take a moment to discuss the underrated stalk-and-slash effort, I Know What You Did Last Summer. The original film is full of atmosphere and features one of the most memorable chase sequences of the past 25-years. Sadly, each of the subsequent follow-up efforts represents a decline in quality. I will say that I Still Know What You Did Last Summer, while not great in the conventional sense, is the perfect vibe for a bad movie night with friends.

Since we’re on a teen horror streak, let’s take a moment to talk about The Hole. This under-seen effort from 2001 features a twisty narrative where one cannot be entirely sure who is telling the truth until the bitter end. The flick, which follows a group of private school students that make the fateful decision to spend a weekend in an underground bomb shelter, features effective performances from a talented cast that includes Thora Birch and Keira Knightley.

Below is the entire Paramount+ horror lineup for the month of October.

The Addams Family
Angel Heart
Annihilation
Are You Afraid of the Dark 2019: Season 2
Bloodrunners
Burnt Offerings
Cursed
The Devil Inside
Event Horizon
The Grudge (October 17)
I Know What You Did Last Summer
I Still Know What You Did Last Summer
Invasion of the Body Snatchers
Jacob’s Ladder
Jennifer’s Body
Phantoms
Shutter Island
Tales from the Darkside: The Movie
The Devil Inside
The Hole 2001
The Last Exorcism Part II
The Unraveling
The Woman in Black
V for Vengeance
A.I. Artificial Intelligence
Fire In The Sky
Necropath
Psychopomp
Scream
Scream 2
Scream 3
Scream 4
The Monster Squad
Universal Soldier: Day of Reckoning
Universal Soldier: The Return
Monster High: The Movie (October 6)
Where the Scary Things Are (October 11)
Unhuman (October 31)

Lastly, I’d like to spend a moment discussing Tales from the Darkside: The Movie. This anthology effort brings the beloved television series to the big screen and delivers three memorable sequences strung together with a fairy tale-esque wraparound featuring Debbie Harry as a ravenous witch. The most impressive vignette of the bunch is ‘Lot 249’. It tells the story of a mummy that is weaponized in a revenge scheme. The vignette features a talented cast of up-and-comers circa 1990. Christian Slater, Steve Buscemi, and Julianne Moore all feature. Another standout is ‘Lover’s Vow’, which sees James Remar and Rae Dawn Chong as a happy couple destined to be torn apart by a dark secret. This segment delivers killer practical effects and sincere performances. While it certainly has merit, ‘Cat from Hell’ is probably the weakest of the three vignettes. However, I find it impossible not to appreciate a narrative focused on a homicidal feline. Even if it is a bit campy, there’s plenty to appreciate about this adaptation of a Stephen King short story.