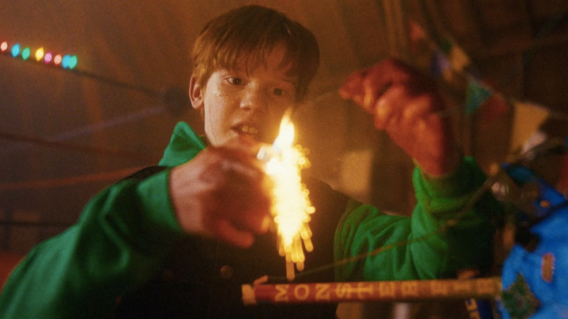 Fantastic Fest lovingly refers to Canadian genre cinema as Canuxploitation, a label you can either love or hate. The term does probably apply to Kids vs. Aliens, director Jason Eisener‘s new sci-fi horror adventure story following a motley crue of teens who battle their way through an alien invasion during an out-of-control house party on Halloween. Hailing from Nova Scotia, Eisener has been at the forefront of boundary-pushing cinema from the Great White North for the last decade or more. If you think of exploitation and horror coming from Canada right now, Eisener and director Joseph Kostanski (Psycho Goreman) are definitely on the shortlist.

A Fantastic Fest alum, Eisener first burst onto the scene with his now legendary Christmas short Treevenge and his post-apocalyptic grindhouse opus Hobo With a Shotgun starring Rutger Hauer. With Kids vs. Aliens, Eisener has made a kinetic midnight movie mixed with a heartwarming coming-of-age horror fantasy. That’s not an easy combination to pull off.

In our interview at Fantastic Fest, Eisener opened up about his rambunctious childhood, collaborating and gallivanting with the young actors on set, and his hopes for a sequel that could continue to expand this bonkers universe. Eisener also created Dark Side of the Ring for Vice, so it’s only fitting that we touch on his love of wrestling and how that passion has influenced his filmmaking style.

Dread Central: I remember the first time I heard of you was Treevenge. Were you here the year that Treevenge played?

Jason Eisener: That was my first Fantastic Fest.

DC: I still love that short very much and would love to see it turned into a feature.

JE: Oh thank you! People were hitting me up yesterday, there is some giant Christmas tree killer movie. I forget what it’s called.

DC: They copied you! I was wondering what kinds of kids’ shows you grew up watching? Did you watch any of Cowboy Who? for example? I feel like your movies have a warped kid-friendly sensibility that comes from watching weird Canadian TV shows.

JE: Oh my god. I’m trying to think. We had The Edison Twins, all the old Degrassi Junior High stuff was really intense. That was one that was really impressionable and probably something that’s stayed with me. My very first film teacher was the creator of Degrassi. When I think of it now and some of the situations with the kids in my movie, Degrassi probably sneaks in there a good bit.

JE: Not so much. It was always part of the plan, in a way. I wanted to live with the characters a little bit and hopefully, audiences connect with them and get into them. Once the aliens crash the movie, then you’re just along for the ride with them. There is so much of myself and my own childhood experiences that are in the movie. Every shot and every moment in the film has a lot of energy and there’s a gag almost in every single scene that we shot in the film. Every bit of it was so fun.

DC: If this is from some of your childhood memories, that’s a pretty crazy, adventurous childhood that you must have had!

DC: You really show your love of wrestling in this. It’s cool to see that. Was wrestling a part of your childhood, too?

JE: Oh yeah, absolutely. When I was kid, I was so into it. They were like comic book heroes brought to life. The gimmicks that the wrestlers had when I was a kid were so big and sometimes over-the-top. I had all their action figures. Some of the first make-believe I did as a kid would be with wrestling action figures. Or just play wrestling with my siblings or my cousins. We would make a ring in the living room and we would each have characters that we would makeup and we’d put on costumes and make belts out of cardboard. When I was playing with my action figures, I would have wrestlers fighting Ninja Turtle action figures or Transformers. It was some of the first storytelling that I did was about wrestling and being inspired by wrestling. It would bleed into my other interests as well, too.

That was kind of the feeling I wanted with [Kids vs. Aliens]. You see the kids are just incorporating wrestling into their movie that has swords and guns. It’s such a mixed bag of all this stuff. When you’re a kid, your imagination can work like that. You’re just taking all the things that you’re inspired by or that you like and turning them into your own sort of thing.

DC: In wrestling terms, do you think the kids or the aliens are the heel?

JE: It’s funny. I remember one time on set, I really tripped the kids out. I was like, ‘What if I told you that you guys are actually the bad guys and the aliens are the good guys?’ And they were like, ‘WHAAAT?’

DC: It blew their minds.

RLJE Films plans to release the Kids vs. Aliens in Theaters, on Demand, and Digital in early 2023 with a Shudder release to follow later in the year. Follow Dread Central for more updates on the film! Chat about Canuxploitation with me on Twitter at DrewSTinnin. Look for Part 2 of this interview closer to release.