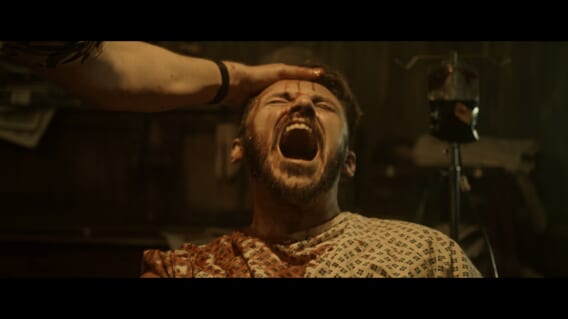 Christopher Mulvin as Jed Freeman in the horror film, FEED ME, an XYZ Films release. Photo courtesy of XYZ Films.

The new wave of cannibal movies is a disgusting delight. Sure, if you’re a bit squeamish, watching people eat people may be a tough pill to swallow. But if you’re like me and a bit of a freak, they’re a gross spectacle of human depravity. Directors and co-writers Adam Leader and Richard Oakes tap into this obsession with their new film Feed Me.

Following the death of his wife, a broken man spirals into an abyss of night tremors and depression and finds himself in the home of a deranged cannibal who convinces him to take his own life in the most horrific way imaginable.

We have an exclusive look at the blood-splattered teaser art:

AND we have some simply repulsive exclusive images from the film:

Feed Me has its world premiere on October 6 at Beyond Fest. It comes to VOD and digital on October 27, 2022