‘Deadstream’ Trailer: Get Ready for Disgusting and Fun Found Footage 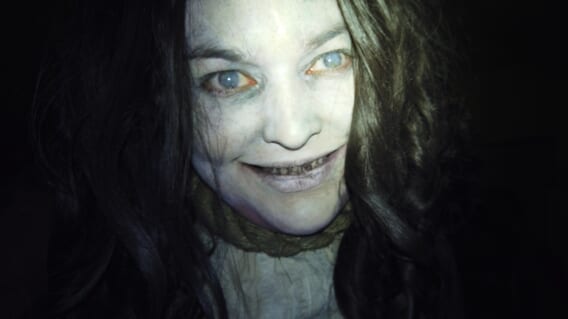 Shudder has released the trailer for the Shudder Original Deadstream ahead of the film’s debut on the platform on Thursday, October 6. The feature directorial debut from husband-and-wife filmmaking couple Vanessa and Joseph Winter, who also share writing co-credits, premiered earlier this year at the 2022 SXSW Film Festival in the Midnight section. The Winters are also directing a segment of V/H/S/99, also coming to Shudder this October.

Deadstream follows a disgraced internet personality who attempts to win back his followers by livestreaming one night alone in a haunted house. But when he accidentally pisses off a vengeful spirit, his big comeback event becomes a real-time fight for his life.

Check out the gonzo trailer now:

In her review out of SXSW, Mary Beth McAndrews wrote:

Deadstream is the Evil Dead 2 gore fest through the lens of found footage which is no easy feat. The Winters strike the delicate balance between poking fun at their protagonist/anti-hero and delivering genuine scares paired with killer practical effects. It’s absolutely ridiculous and swings for the fences, pulling not punches against the strange universe of YouTube celebrity. Deadstream proves that found footage is alive, well, and still a wholly original subgenre perfect for dissecting our new digital landscape.

Joseph Winters stars in the film, alongside Melanie Stone and Jason K. Wixom.

Joseph and Vanessa Winters produced Deadstream, alongside cinematographer Jared Cook and Melanie Stone. The Winters co-edited the film, with Joseph contributing to music for the project as well.