The power of Christ compels you. 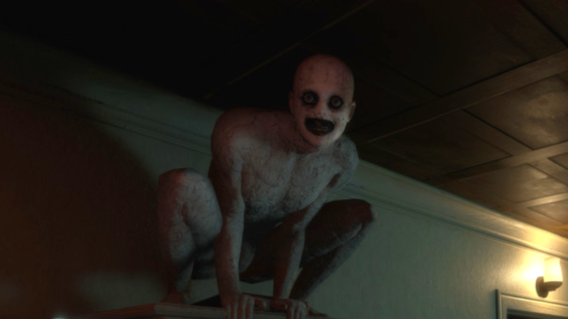 The horror genre loves its demon, whether figurative or metaphorical. Those servants of Satan love to wreak havoc on us puny mortals. From making homes smell like sulfur to full-on possession, demons are known for their ability to, to put it lightly, really mess up your day. That alone makes them some of horror’s scariest monsters. Bonus points if you were raised Catholic like me and had a father who told you that demons were real and were looking for any opportunity to steal your soul.

While demons are everywhere, there are places that seem more ripe for the demonic picking. Yes, haunted houses and the homes of broken families are definitely the top picks. But what about morgues? I mean, they’re already packed full of dead bodies, it’s practically a demon’s playground. Thankfully, our sister site DreadXP and developer Brian Clarke tapped into the setting’s morbid possibilities with their new game, The Mortuary Assistant.

In honor of the game’s release, we’re looking back at some of horror’s best and scariest demonic presences.

The Demon in Paranormal Activity

While the demon in Paranormal Activity isn’t as tangible as many other demonic figures of horror, it is definitely one of the scariest. What starts out as a simple case of paranormal haunting evolves into a downright horrific demon showdown where Katie is a pawn and her boyfriend Micah is there to film and be an idiot. The demon appears through brief shadows and terrifying footprints in flour. It’s a nasty creature that’s been ready to feed on Katie for practically her entire life.

Mr. Boogey himself is one of the genre’s most terrifying demons. Scott Derrickson’s 2012 contemporary horror classic boasts a demon with a face that will haunt your dreams. And the way he looks isn’t the scariest thing about him. No, he infiltrates the minds of young children and makes them murder machines. Plus, he films the deaths. He’s deranged.

The Red-Faced Man in Insidious

This is one of the rare creatures that made me audibly shriek when I first saw him. James Wan is known for creating diabolical demons with his work, and the red-faced man in Insidious is a prime example of that. Not only is this Further-haunting presence horrifying to behold, but he’s got a twisted sense of humor as seen with his love of blasting Tiny Tim in his children-eating, claw-sharpening workshop.

Bathsheba in The Conjuring

Like I said in the previous list entry, director James Wan knows how to create a scary monster, and specifically a scary demon. He got to flex those muscles again in the first entry in The Conjuring franchise with the demonic Bathsheba who terrorizes the Perron family. Not only does she possess the family’s matriarch, but she appears perched on dressers and flings the young daughters about the house. Bathsheba is one pissed-off demon and she doesn’t care who knows it.

Pazuzu in The Exorcist

This wouldn’t be a true list about horror’s scariest demons without the iconic Pazuzu from William Friedkin’s The Exorcist. Pazuzu is the baddest of horror baddies, tricking a young Regan into thinking they were just friends, then taking over her body and soul. This demon has no regard for human life, shoving a crucifix in Regan’s vagina, projectile vomiting in priests’ faces, and so much more.

Timo Tjahjanto and Gareth Evans’ segement “Safe Haven” in V/H/S/2 boasts one of the wilder demons in horror. Even wilder is the lead-up to the demon reveal, involving a mass suicide, deranged cultists, and spontaneous human combustion. The segment follows a documentary crew who want to infiltrate the Paradise Gate cult and document their strange rituals. But, they quickly realizes that this cult is onto something much nastier than they thought. The short ends with our massive new demon friend saying, “Papa”, which is the perfect blend of horror and comedy.

Kagutaba in Noroi: The Curse

Koji Shiraishi’s 2005 found footage film Noroi: The Curse is an unsung horror J-horror classic that also happens to feature one of the genre’s creepiest demons. In the film, a paranormal investigator is looking into reports of strange crying. As his investigation progresses, he slowly realizes this isn’t just an isolated ghostly incident. He uncovers a cult for the demon Kagutaba, the attempts to stop them, and the demon’s attempt to infect people across Japan. The scope of the story unfolds into a horrifying series of events that’s captured on camera, live television, and more.

Brad Anderson’s 2001 film Session 9 doesn’t get enough appreciation for its power as a possession narrative. When a team of absestos removers, led by the company owner desperate to make some cash, win a bid to clear out a massive abandoned penetentiary, they’re excited about the prospect of a big pay day. But, as they begin the laborious process of cleaning out the place, they discover records from past patients, as well as other shadowy figures that lurk in the dark. Simon is shown primarily through terrifying audio recordings and his voice alone is bone-chilling.

I would like to submit Patches from the iconic made-for-TV mockumentary/found footage film Ghostwatch as one of horror’s scariest demons. And it’s not just because filmmaker Lesley Manning convinced the entirety of Britain that demons were real. His design is downright horrific in the few glimpses we get of him. Patches in the supposed ghost, actually demon, haunting a single mom and her two children in their small London home. While the BBC is doing a seemingly real investigation into the haunting, they reveal Patches is more than the ghost of an old man; he’s a demonic entity ready to takeover the nation.

Deadites in The Evil Dead

So Sam Raimi’s The Evil Dead has a reputation for being silly, yes. But his demons, known as Deadites, are downright nasty, regardless if you’re watching the first, second, or even third film. They’re also gnarly in Fede Alvarez’s adaptation of Raimi’s series. These cackling, decaying demons want nothing more than to swallow your soul.

If you love even one of the movies on this list, then you’ll definitely want to check out The Mortuary Assistant, out now on Steam.