It's a rental from Hell. 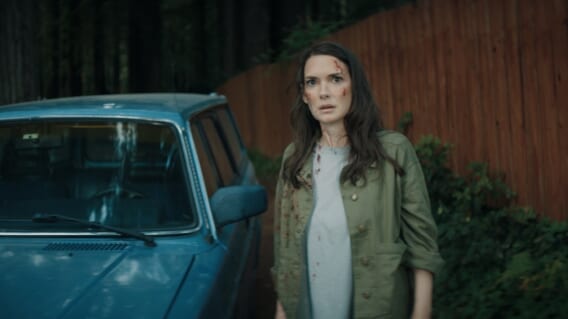 The return of Winona Ryder since the premiere of Stranger Things has been incredible to behold. This genre queen, seen in classics like Beetlejuice and Bram Stoker’s Dracula, defined a generation of horror fans. Now, thanks to the Netflix hit, Ryder is gracing our screens more than ever. Her latest film Gone In The Night, directed by Eli Horowitz, stars Ryder as a woman searching for her boyfriend who suddenly disappears while they’re on vacation.

Read the full synopsis for Gone In The Night below:

Upon arriving at a remote cabin in the redwoods, Kath (Winona Ryder) and her boyfriend (John Gallagher Jr.) find a mysterious young couple (Owen Teague and Brianne Tju) already there — the rental has apparently been double-booked. With nowhere else to go, they decide to share the cabin with these strangers. When her boyfriend mysteriously disappears with the young woman, Kath becomes obsessed and enlists an unlikely supporter (Dermot Mulroney) with finding an explanation for their sudden breakup. But the truth is far stranger than she could have ever imagined.

AirBnB or rentals-gone-wrong horror is an emerging favorite for me because it really is so terrifying. Gone In The Night looks to capture that fear and twist it even further.

Gone In The Night comes to theaters on July 15, and digital and VOD on August 2.