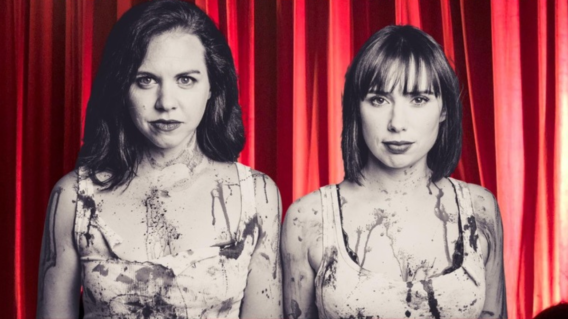 Each week, the hosts take turns watching a horror movie the other one hasn’t seen, telling them the entire plot—beat by beat—spoiling the fuck out of it. But there’s a twist: the story stops at key plot points so two important questions can be asked: What would you do to stay alive? And what do you think the characters did?

It’s an interactive game that invites listeners to play along … or, more likely, find themselves shouting at their phones because the hosts didn’t do what they would have done.

All of this is interspersed with lots of improv, running gags, ridiculous tangents, and personal anecdotes about the ladies’ 20 years of being besties.

The podcast has developed a loyal following known as “Sammies,” (after the abbreviation for the show’s name, KKSAM).

So, to celebrate staying alive for 200 episodes (although only barely sometimes), Kim and Ket are hosting the first-ever “Sammie Awards,” a special clip show episode to recognize listeners’  favorite moments from the show’s run to date.

Once the nominees were set, subscribers to the show’s Patreon voted for the actual winners.

Be sure to check out the 200th Episode “Sammie Awards” special on June 15 to relive the funniest moments from Kim and Ket’s first 199 episodes. Follow the show on social media  @KKSAMPODCAST, and download wherever you listen to podcasts. New episodes drop every  Wednesday.