If you're in LA, you need to check this exhibit out! 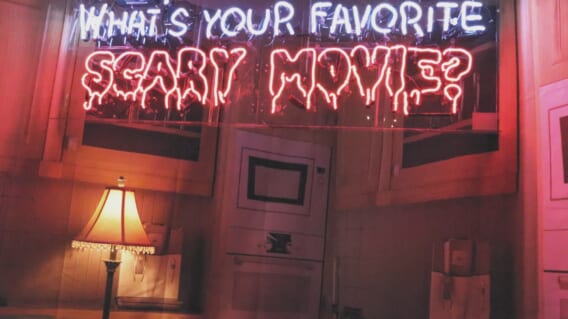 Processed with VSCO with preset

The ‘90s brought us iconic films like Scream, Candyman, I Know What You Did Last Summer, Leprechaun, Halloween H20: 20 Years Later, Freddy’s Dead — the list goes on. And for many horror fans, the decade brings back feelings of a simpler time when frost tips baggy clothes, pagers, and movie stores were all the rage.

The Mystic Museum has given us a necessary dose of nostalgia once again with their ‘90s Slashers Immersive Exhibit. Sponsored by Midsummer Scream, Fangoria, Slasher Energy, and Fright-Rags, the exhibit features an art show, props, collectibles, and photo ops for fans of all ages.

Since its opening on April 16, it has already received visits from Matthew Lillard, Axelle Carolyn, Vanessa Decker, Ryan Turek, and Piggy D.!

Owners of The Mystic Museum, Kiko Bailey and Erick Wessel, have been bringing weird and wonderful exhibits to Burbank since 2013. In fact, their first art show took place on the first day of opening their Bearded Lady Vintage & Oddities’ original location. Now, after much rightfully deserved success, the ‘90s Slasher Exhibit marks their 21st (technically, 22nd) exhibit!

The opening weekend marked one of their best turnouts yet, Bailey says. It was filled with music, food trucks, giveaways, a tarot reading by Brittany Leigh, and new exhibit merch with art by Chris Noble (@trashbagghost).

Related: 5 Ultimate Forgotten Slasher Films That Demand To Be Seen

The theme idea for the exhibit came in the midst of the shop’s “Evil Dead: 40 Years of Fear” exhibit, Bailey says.

“I’m always trying to plan out, like, ‘What are we going to do next?’” Bailey tells Dread Central. “[‘90s slashers] are what I grew up with, truly. We wanted to recreate all these memorable scenes and new art customers would enjoy seeing.”

In the Evil Dead exhibit, Bailey and Wessel introduced interactive devices — yet another fun element that’s perfect for any horror fan trying to get a sinister, IG-worthy snapshot. And just when you thought it couldn’t get any better, the duo takes it up a notch with every appearance … kind of like our favorite slasher sequels.

“There’s definitely more interactive devices. We changed the interactive keychain to a slasher dagger collectible that you get to keep,” Wessel says. “If you want to come see the exhibit another day, you could bring the dagger and use it again.”

He adds, “What I wanted to make sure of is that we always kind of add a certain level of new technology, but obviously keep it all retro-looking because that’s what we do. For every show, I want to add something new. So, the photo booth right at the beginning, you get to take a photo as if you’re in those traditional ‘90s slasher posters with the V-formation.”

And if you consider yourself to be a real-life Randy Meeks when it comes to your horror film knowledge, you can now put it to the test with trivia on the interactive sets! A question appears on the device, and you’ll be given four multiple-choice responses to choose from.

With larger-scale sculptures, animated backdrops, and themed interactive devices, it’s apparent Bailey, Wessel and their incredible team have set the bar for rave-worthy horror exhibits. They have photo ops for films including Scream, Child’s Play 2, Candyman, Tremors, I Know What You Did Last Summer, Silence of the Lambs, Ring, and Nightbreed!

What’s more, The Mystic Museum team has stuck to their roots with their traditional art shows. Except this time around, they’ve featured even more artists’ astounding artwork throughout the exhibit.

The Mystic Museum has big plans for the exhibit, Bailey and Wessel say. Since it’ll run longer compared to their previous shows, they are hoping to hold special themed events like meet-and-greets and movie nights.

So, if you’ve ever wanted to feel like you were in your own ‘90s slasher, this is your chance! We can assure you it will be exquisite.

Can’t make it to the exhibit in the flesh? Check out our photo gallery below!