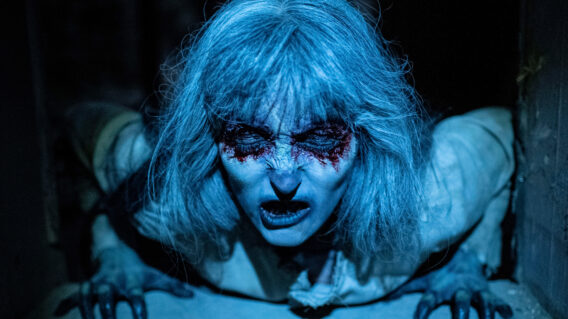 Director Joshua L. Norman provided Dread Central with an exclusive statement for his upcoming folk horror film Dormant Evil, which is now in post-production. You can read his statement below. We’ve also included the first trailer along with the poster and a batch of stills for you to enjoy. KateLynn E. Newberry, Kaleina Cordova, Heather Fairbanks, Kayla Kelly, and Joel Paul Reisig star in the film. Robert Sturdivant wrote the screenplay. Shooting for Dormant Evil took place last year. It does not yet have a release date, but we hope to hear more news in the near future.

Dormant Evil follows a young filmmaker who becomes obsessed with uncovering the truth about the notorious Midwestern serial killer Jeremiah Godslight, who was driven to insanity after watching his mother kidnap and torture women who she believed to be witches back in the early 1880s. However, the overenthusiastic filmmaker gets more than he bargained for. As he soon learns that unlocking the secrets of Jeremiah Godslight’s past, he unleashes an unspeakable evil that’s lain dormant for decades. With a premise like that, it sounds like Dormant Evil will certainly be a film that our readers should be looking forward to.

Director Joshua L. Norman had this to say about Dormant Evil:

Dormant Evil is a horror film with a dark psychological edge. When given the screenplay, my intention was to immerse the audience into an unnerving world of ritualistic witchcraft, blood-thirsty serial killers, and madness.

At the foundation of this unique and torture filled story is something many can relate to; the delicate relationship between a mother and son. For Jeremiah Godslight, evil pursues with the unraveling aftermath of this particular relationship gone wrong. Growing up in an era of classic horror films with elements of blood and gore, we paid cinematic homage with an array of stabs, slices and acid burning flesh.

The untapped storyline of Jeremiah Godslight as one of America’s first serial killers was also a draw for me. Blending Witchcraft and Christianity through historic events such as the Salem witch trials creates a blurred world of true evil lurking among us.