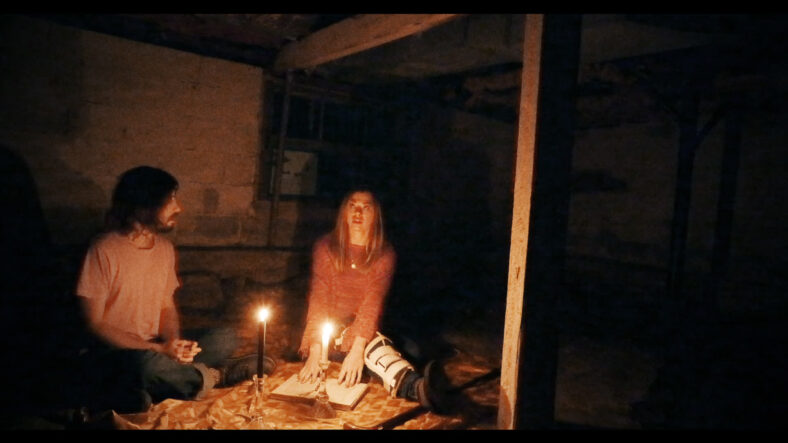 After a year in cyber captivity, the Unnamed Footage Festival is returning to theaters of San Francisco for four days of found footage horror, faux documentary, and first-person POV programming from March 17th through March 20th! Opening night will be held at the screening room of the Mission District gallery Artist’s Television Access, followed by a late-night screening at the Roxie Theatre on Friday, and culminating at the historic Balboa Theater for two full days of shorts and features.

Dread Central is joining Unnamed Footage Festival as their official media sponsor for this year’s festival! We have such a massive love and appreciation for the art of found footage and couldn’t be more excited to pair with UFF exclusive coverage of the fest.

The  5th edition of the Unnamed Footage Festival will kick off on Thursday night with our annual Recalibration Party at the Artist’s Television Access. The party will begin with a screening of Ben Ben 7: Haunted Highway, followed by a Found Footage Horror Power Horror – 60 nonstop clips of strange and scary moments from our favorite movies – with free beer provided by our beverage sponsor, Lime Ventures Distribution.

As found footage continues gaining popularity and evolving into a broader genre, the UFF line-up has been diversified to highlight ARG (Alternate Reality Game) content, screenlife, and hybrid found footage. To commemorate this expansion, the Unnamed Footage Festival will be co-presenting Behind the Mask: The Rise of Leslie Vernon as a pre-festival Terror Tuesday screening at the Alamo Drafthouse New Mission. The much-loved cult classic is one of the most notable examples of hybrid found footage horror, with the footage of a documentary crew interviewing a movie monster bleeding into the monster’s real movie.

While the scope of the festival has grown, the Unnamed Footage Festival promises to keep delivering what brought audiences to the event in past years: a chance to watch obscure, bizarre, and ambitious “in-world camera” movies on the big screen. In addition to Behind the Mask, this year’s repertory screenings also include a lost Italian plague movie titled The Gerber Syndrome (2011), the 2017 intimate base-jumping thriller Base, and screen life pioneer The Collingswood Story (2002), with the cast and crew in attendance.

And the main slate titles will certainly not be overshadowed, including up-and-coming and established talent experimenting in this wild genre. Our 2022 selections will include the world premiere of Jacob Aaron Estes’ (Mean Creek) experimental pandemic haunted house movie You Belong To Me, a music video shoot gone wrong in an endless desert in The Outwaters, a young man’s document of his own abductions on a head-mounted camera titled The Alien Report, the world premiere of the first feature film shot entirely on 360-degree cameras, PUTREFIXION a video of Nina Temich, and the meta sequel to UFF2’s late-night serial killer stand-up comedy smash Murder Box, My Inner Demon: A Geraldson Tale.

Short film selections include Kane Pixels’ viral creepypasta short Backrooms, the faux doc that launched an ARG about a lost N64 game, What Happened To Crow 64?, UFF alumni Thomas Burke’s screenlife oddity SHC Freak Accident, the stop motion animation feed of a night vision camera in the woods Posted No Hunting, and the world premiere of the new short film by Adrian Tofei (Be My Cat: A Film For Anne) titled Lost Footage.

In 2021, the Unnamed Footage Festival moved into the online space, breaking the mold with their 24-hour long hosted livecast of shorts and features accompanied by an ARG. Returning to theaters, the team still promises plenty of bizarre occurrences for badge holders throughout the 4-day festival. Saturday and Sunday will include a marketplace of vendors and local artists in the lobby of the Balboa Theater. Be sure to visit with them and ask about any strange symbols you may have seen.

Check out the full line-up below:

WORLD PREMIERE – Filmmaker Jacob Aaron Estes (Mean Creek, Rings, Don’t Let Go) transforms a pandemic quarantine into the groundwork for a household horror story. As brother and sister document their day-to-day life in isolation, the lines blur between a fun family project and a deeply disturbing work of avant-garde horror. Strategically breaking the format of in-world camera, You Belong To Me utilizes found footage horror storytelling to amplify the fears of parents separated from their children and children trapped in their own house forced to fend for themselves

WORLD PREMIERE – After purchasing a 360 camera, Nina starts recording her daily life as a way of developing her skills as a director in hopes of getting accepted into film school. But while dancing and doing drugs, strange things begin to happen. PUTREFIXION utilizes the disorienting nature of a 360 lens to transform Mexico city, accentuate the ritual of dance, and open a new chapter of in-world camera narratives. As Nina, model and dancer Dalia Xiuhcoatl commands the space and movement of the camera, giving this portrait of a young woman’s brush with the supernatural a mesmerizing feminine energy.

WEST COAST PREMIERE – An alien abductee figures out a clever way to secretly record his own alien encounters revealing telepathic aliens, human hybrids and the elusive “men-in-black”. Shot guerrilla-style on the streets of Chicago with a small yet very dedicated crew, The Alien Report takes the raw energy of a found footage horror movie and combines it with a script influenced by testimonies from the UFO abductee community and the most wild alien special effects you’ve seen since Fire In The Sky. – Screening followed by Q&A

US THEATRICAL PREMIERE – While researching the historic murder of Aurore Gagnon for a script inspired by her story, three filmmakers cross a line. By the time they realize they’ve tampered with something they shouldn’t have, their footage is already on its way to being sold in a mystery box on the dark web. – Screening followed by Q&A

THEATRICAL PREMIERE – Set in 1999, Deadware explores the early internet through masterful use of the screenlife format, following two friends who decide to play a questionable online point-and-click adventure game to test out their webcams and brand new DSL connection. – Screening followed by Q&A

A team of paranormal investigators search a sacred Native American cave for clues in the unsolved disappearance of four local teens. While celebrating the completion of their project in the cave and reviewing the documentary edited from the teen’s footage they discovered, the team begins to notice anomalies they missed on earlier watches, and begin to fear for their lives. A hybrid found footage / horror film narrative, Malibu Horror Story is the bombastic crowd-pleaser of UFF5 that will have the audience shrieking and leaping out of their seats in terror. – Screening followed by Q&A

An oddity of hybrid mockumentary, Masking Threshold tracks the descent-into-madness of an isolated would-be scientist, who sets out to understand a peculiar form of tinnitus he’s developed. Ostensibly a found vlog composed entirely of macro and extreme closeup footage, Masking Threshold is a deeply unsettling film with stomach-churning sequences of violence, depravity, and grossness.

This meta sequel to UFF2 selection Murder Box follows director Gerald Varga as he navigates his depression after the underwhelming reception of his first film. My Inner Demon is a crash course on found footage horror filmmaking by two old friends who are slowly driving each other insane. – Screening followed by Q&A

THEATRICAL PREMIERE – Four travelers encounter a menacing phenomenon while shooting a music video in a remote stretch of the Mojave Desert. Filled with indescribable creatures squirming their way out of darkness, THE OUTWATERS is a dizzying slow burn of other-worldly terror caked in dried blood.  – Screening followed by Q&A

Two days after an unidentified object landed on a farm in South Africa in December of 1967, four government agents, equipped with a Super 8 and 16mm camera, drove out to investigate it. What the agents treat as a concrete anomaly to be examined through Geiger counters, cameras, and beakers evolves into an all-encompassing, existential conundrum.

THE ZAND ORDER (2021, USA, dir. Sarah Goras Peterson)
A grieving mother hires a filmmaker and a tracker to help document her search in the Florida jungle, as she hunts a cult she believes murdered her daughter. Imagine The Blair Witch Project except it’s an all-female expedition and they hate each other… and it sure doesn’t help that each night they spend in their single tent something visits them to set up strange puzzles for them to solve. The Zand Order is a perfect example of the passionate, no budget / no rules filmmaking that can only happen in found footage horror.

BEHIND THE MASK: THE RISE OF LESLIE VERNON (2006, USA, dir. Scott Glosserman)

The next great psycho horror slasher has given a documentary crew exclusive access to his life as he plans his reign of terror over the sleepy town of Glen Echo. A ground-breaking hybrid of mockumentary and traditional slasher movie, Behind the Mask has grown a well-deserved cult following of fans of horror comedy and slashers in the years since its release.

Shown through turn-of-the-millennium desktops, The Collingswood Story is a pioneering digital horror film. John and Rebecca begin using webcams as a way to maintain a newly distanced relationship when a curious encounter with an internet psychic complicates their lives and uncovers dark secrets about Rebecca’s new home. Before Skype and MySpace existed, filmmaker Mike Costanza’s revolutionary, essential film embodies a phase of internet culture midway between the ‘90s acceptance that, “On the Internet, nobody knows you’re a dog” and the unblinking, totalizing digital platforms of the present.  – Screening followed by Q&A

When Shep suddenly dies, Kristopher and Ryan become less attached to reality. As they wander the southern landscape of Louisiana they slowly descend into a state devoid of hope and order. Jorge Torres-Torres (Fat Tuesday, Sisters of the Plague, Toad Road) combines the heart of Errol Morris with the satire of Harmony Korine in this adolescent romp through above-ground cemeteries. Join us for this rare screening as we explore themes of life, death, and (faux) reality. – Screening followed by Q&A

A virus ravages Europe. Phase I brings flu-like symptoms. Phase II attacks the central nervous system. Phase III: withdrawal, irrationality, extremely violent behavior. There is no cure. Filmed like a documentary, The Gerber Syndrome captures one nation’s desperate, under-resourced efforts to fight a disease it can barely understand, much less contain. Though made eleven years ago it offers images and moments that could have been lifted directly from our media in today’s age of COVID. – Screening followed by Q&A

Part love-triangle drama, part extreme sports vlog with a hint of horror, ex-war photographer turned filmmaker Richard Parry transports us into our own squirrel suit and launches us into the sky. BASE is a faux documentary about base jumping shot in actual dangerous situations.

Tom Riley tries to take a break from the Paranormal and starts a job as a ride-share driver for DropUoff. The strange passengers and encounters he has on Halloween 2019 are all captured on surveillance cameras, dash cams, and his personal body cam. He encounters a blood-thirsty passenger, a young woman transporting something odd in a bag, a not-so-friendly scarecrow, and a witch.

Badges are now on sale for entry to all festival events except the Terror Tuesday screening at Alamo Drafthouse New Mission. Day passes are available for 3/19 and 3/20. Individual tickets for all showings will be available at the box office of each theater. More than half of this year’s screenings will have talent in attendance for Q&As and discussion. Visit the website for UFF5’s full schedule and more details.

The sense of community that developed during the #UFF24HR livestream was undeniable and has inspired the organizers to continue a virtual component going forward. For those who cannot attend the in-person event and any attendees who want more, an online festival is set for April featuring a different program of films. Details will be announced soon.