Werewolves that start big and get even bigger are rare beasts indeed. Here's our exclusive first look at a new card from Magic: The Gathering's next set, 'Innistrad: Crimson Vow.' 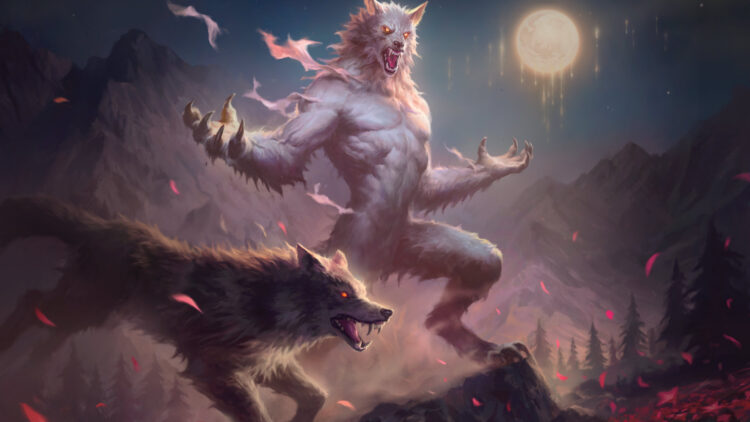 Magic: The Gathering first introduced players to Innistrad, a corrupted, Gothic world teeming with classical creatures of horror, some 10 years ago. This year, the card game has brought back its eldritch atmosphere—first, with the release of the werewolf-themed set Innistrad: Midnight Hunt in September, and now, with the release of its vampire wedding-themed companion set, Innistrad: Crimson Vow, which arrives later this month.

Thanks to publishers Wizards of the Coast, we have an exclusive first look at a gorgeous and powerful new double-faced card from Innistrad: Crimson Vow, Avabruck Caretaker/Hollowhenge Huntmaster.

Here are both sides of the card, in its regular frame and extended art versions:

Werewolves come in all shapes and sizes, but werewolves that start big and get even bigger are rare. Avabruck Caretaker/Hollowhenge Huntmaster is meant to be the top of your curve in a Werewolves deck or a deck based around +1/+1 counters, protecting itself and making your army bigger in the process. And if night falls? Suddenly, your whole battlefield gets some additional protection. And because it triggers on the beginning of combat, it has an immediate impact on the board. This card synergizes with Werewolf decks, Coven decks, and +1/+1 counter based decks in a pretty powerful package.

In 2011, Innistrad, Dark Ascension, and Avacyn Restored became the first three Magic: The Gathering sets to immerse players in Innistrad’s dark world. Together with Midnight Hunt, Crimson Vow continues that saga in a singular narrative through-line.

Midnight Hunt ended with a harvest-tide ritual meant to restore the balance between day and night that was interrupted by a werewolf attack. Amidst that chaos, Olivia Voldaren, the head of one of Innistrad’s vampire families, snuck in and stole the Moonsilver Key—an essential component of the ritual. Having thwarted the ritual, Olivia dooms Innistrad to an eternal night.

When we meet Olivia again in Crimson Vow, she’s preparing for her opulent wedding. Thriving under endless moonlight, she now seeks to consolidate power at the head of two vampire families to rule over Innistrad.

For players and collectors with a taste for gothic horror, Crimson Vow‘s Dracula Series also brings Bram Stoker’s Dracula into the realm of Magic: The Gathering. The series takes 18 cards from the set and gives them alternate artwork with characters, locations, and objects inspired by the original novel.

Innistrad: Crimson Vow arrives November 19, 2021. All images courtesy of Wizards of the Coast.