‘Don’t Breathe 2’ is an Insult to Sexual Assault Survivors

Rodo Sayagues fails to deliver a protagonist audiences can get behind. 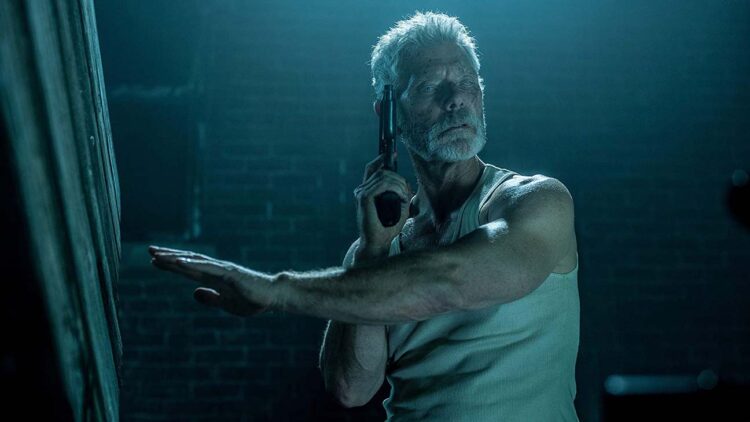 I have been a big fan of several of Fede Álvarez’s films. So, when I read that he (as a producer on Don’t Breathe 2) suggested The Blind Man isn’t really the hero of the film, I wanted to give it a chance and go in with an open mind. But after sitting through it, I wish I had listened to the negative press and taken a pass on this misguided follow-up.

Now the father of a young girl, The Blind Man from Don’t Breathe sees himself battling a new group of armed ruffians intent on taking something away from him. This time, it doesn’t really matter who emerges victorious because everyone is doomed, no matter what.

My biggest issue with Don’t Breathe 2 is that that there isn’t anyone to cheer for. We aren’t meant to invest in the intruders—as is evidenced by the lack of character development, and the fact that they are morally bankrupt. And I refuse to invest in the rapist from the original. So, that doesn’t leave the audience with a lot of options.

None of the dog-killing intruders (yes they are despicable enough to kill an innocent dog for selfish gains) are painted as protagonists, so none of the twists will be spoiled and to distance the narrative from the first. But the lack of a clearly defined protagonist leaves the audience in a constant state of limbo. I ultimately wound up angry and not really caring what happened. A child’s future hangs in the balance and the outcome of the film will determine what kind of life she has. But absolutely no one in this sequel should be put in charge of the welfare of a child.

I wish screenwriters Álvarez and Rodo Sayagues had realized this sequel as a standalone effort, rather than a follow-up, and re-written the lead as a new character. I can’t imagine it would have taken a great deal of effort to turn this into the story of a single father (with an extensive military background) who finds himself tangled up in a home invasion where ruffians are attempting to kidnap his daughter. That would have been a cleaner option and it would circumvent the problematic element of making the would-be-hero a man who has forcibly impregnated women. To shift The Blind Man into the role of protagonist is an insult to survivors of sexual assault. Accordingly, I had a difficult time finding common ground with any of the key players.

Problematic elements aside, another major concern is just how similar to the original this sequel actually is. Even with the narrative tweaks and a different reason behind the home invasion at the heart of the story, this feels far too derivative of the first film. Sure, Don’t Breathe 2 is told (largely) from the perspective of The Blind Man, rather than that of the intruders. But that’s gross and not enough of a change-up to distance this from its predecessor. The film fails to do the most important thing a sequel should: To make a case for its existence by setting itself apart from that which came before it, and telling its own unique story.

Sayagues, who also directed the film, displays a keen ability to build tension and keep his audience in a state of suspense. He got several things right in terms of atmosphere and pacing. Plus, there is a pretty gnarly eye-gouging scene that Fulci would be proud of. But Sayagues ultimately failed to deliver a proper protagonist and therefore, all of his efforts are for naught.

I came away from this sequel pissed off and disgusted. If you’re keen to check Don’t Breathe 2 out for yourself, it’s now available on VOD and Blu-ray. But I can’t say that I recommend doing so.