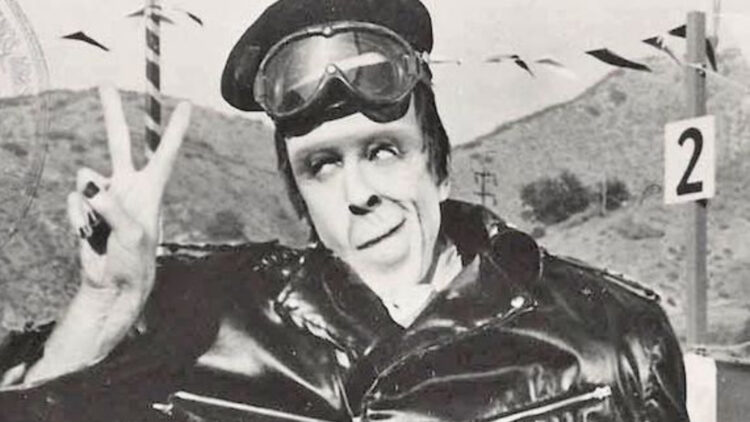 Fans of The Munsters might recall an episode from the original series entitled “Hot Rod Herman.” The plot follows Herman Munster’s (Fred Gwynn) scheme to win back the Munster family’s Koach car after he loses it in a bet. With his custom-built roadster, the Drag-u-la, in tow, Herman enters a race at the Mockingbird Heights drag strip in an effort to reclaim the Koach, donning this leather jacket:

The episode left an indelible mark on Rob Zombie, who famously wrote the song “Dragula” as an homage to Herman’s whip. And now that Zombie’s helming the upcoming feature reboot of The Munsters, he’s made sure that the “Punk Rods” jacket will be part of Herman’s wardrobe.

Over the weekend, Zombie posted another photo from the set of The Munsters on Instagram to show off the crew’s faithful recreation of the jacket. “A sneak peek at a piece of Herman’s wardrobe. I am sure you Munster maniacs will recognize,” Zombie said.

This update adds to the anticipation that Zombie has built for months. Since confirming his attachment to the project back in June, he’s shared snapshots of Herman’s flat-top, and a slew of photos detailing the construction of the Munsters’ mansion, 1313 Mockingbird Lane.

In another Instagram post he shared this morning, Zombie is posted up in front of the finished version of the house, which is now enveloped in twisty branches and creeping vines:

The Munsters residence for this new production looks pitch-perfect: a weathered, worn-down Victorian Gothic abode whose neighboring houses have that pretty pastel paint job typical of the 1960s. Likewise, Herman’s jacket transports us back to the era’s Greaser subculture while giving a nod to one of the show’s most influential storylines.

How are you feeling about what we’ve seen from Rob Zombie’s The Munsters so far? Share your thoughts in the comments below or on Facebook, Twitter, or Instagram. Dread Central is now on Google News.