"Ghoulish" Gary Pullin lends his unique talents to the latest poster for SYFY's 'Day of the Dead' series! 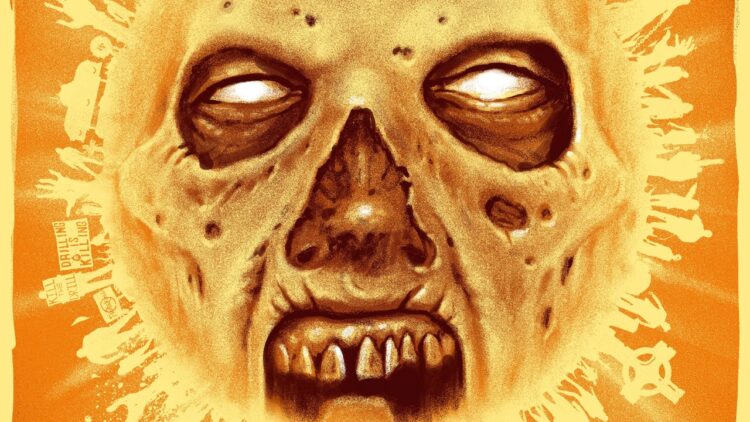 SYFY’s new series Day of the Dead has enlisted award-winning artist “Ghoulish” Gary (Gary Pullin) to design a custom poster ahead of the series premiere on October 15th. Pullin is known for his unique style of horror designs and illustrations – including reinterpretations of poster art from famous horror films. Check it out at the bottom of the article!

“When SYFY asked me if I would like to create a limited-edition poster for their new series inspired by George Romero’s Day of the Dead, I immediately checked out the first few episodes they sent and I was pleasantly surprised,” says Pullin. He went on to say:

“It also helped that my friend and fellow Canadian Steven Kostanski (The Void, Psycho Goreman) was in the director chair. With Steven at the helm, I had a feeling the zombie action was going to be insanely inventive, and I wasn’t wrong! The creative team at SYFY asked that some of their political themes were incorporated into the piece and they wanted the image to be bright, bold and have a sense of humor so we came up with the ‘zombie sun’ concept. The rays gave me the opportunity to hide tons of easter eggs from the series. I hope George Romero fans check out the show with an open mind and have as much fun watching it as I did creating this limited-edition poster. Long live Romero!”

Synopsis:
Day of the Dead is the story of six strangers trying to survive the first 24 hours of an undead invasion. This ode to George A. Romero’s famous flesh-eaters reminds us that sometimes all it takes to bring people together is a horde of hungry zombies trying to rip them apart.

Day of the Dead hails from showrunners Scott Thomas, Jed Elinoff while starring Keenan Tracey and Natalie Malaika. Look for the series to premiere on SYFY on October 15th at 10 PM.

Additionally, the series will be partnering with local comic shops across the US throughout October, where each shop will be running giveaways unique to their shop fanbase.

Are you a fan of George A. Romero’s Day of the Dead? Are you excited to dive into the new SYFY series in October? What do you think of the custom poster by “Ghoulish” Gary Pullin? Let us know in the comments below or on Facebook, Twitter, or Instagram! You can also carry on the convo with me personally on Twitter @josh_millican. Dread Central is now on Google News!