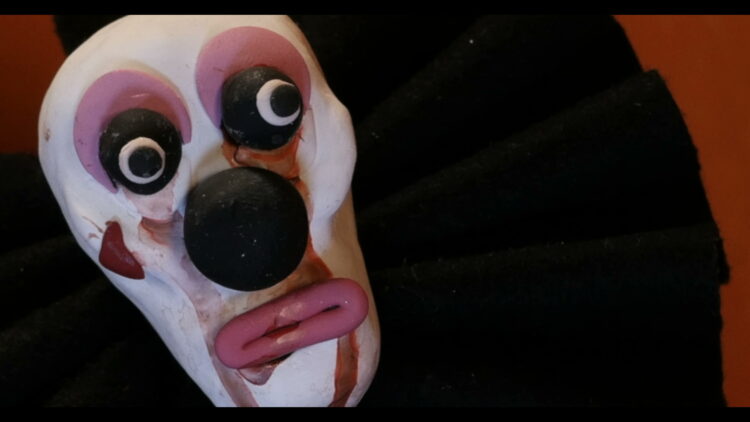 In less than a month, Nightmares Film Festival will return to Gateway Film Center in Columbus, Ohio. This will mark the festival’s sixth year of glorious existence and its fifth year as an in-person destination event. What delights does this year’s lineup contain? I’m glad you asked.

This year’s Nightmares includes the return of the “Midnight Mind Fuck,” one of the fest’s most well-known traditions. It’s been hailed by The Film Coterie as “one of the most dangerous and challenging blocks of programming at any festival”. The 2021 mind melters include the Northern U.S. premiere Masking Threshold, which has been described as an “intense, disorienting descent into madness”. There will also be a one-of-a-kind 35mm screening…with a live orchestral score…of Flesh of the Void filmmaker James Quinn’s “unsettling” Ivory Wave, about a man on bath salts. Not enough? I agree! There’s also going to be a live recording of the award-winning Fright Club podcast, as well as the fest’s excellent annual panels, Social Progress Through Horror and The New Distribution, which will include the participation of distributors and studios.

Nightmares has also named finalists in its short and feature screenplay contests. Those lucky screenwriters will connect with filmmakers during the festival to explore the possible production of their scripts.

All selected competition films and screenplays will vie for a coveted Night Mare statuette, representing the dark horses of the genre. Renowned toy and figure creator Tony Simione sculpted and painted the Night Mare.

For the Sleepless among you who are planning to make the trek to NFF this year, some passes are still available, though they always sell out. So if you want to make the pilgrimage this year, get on it! For more details on this year’s program, be sure to check out the official site.

Are you planning on attending this year? If so, what are you most excited about seeing? The features? The shorts? Hit me up on Twitter @schlocketeer! Give me your thoughts, be they about NFF 2021, horror, or just movies in general!