A Lawyer Dressed as Michael Myers Was Arrested in Texas

The man, who says he was trying to spread "a little bit of positivity," also bumped into Slayer's Tom Araya while in costume. 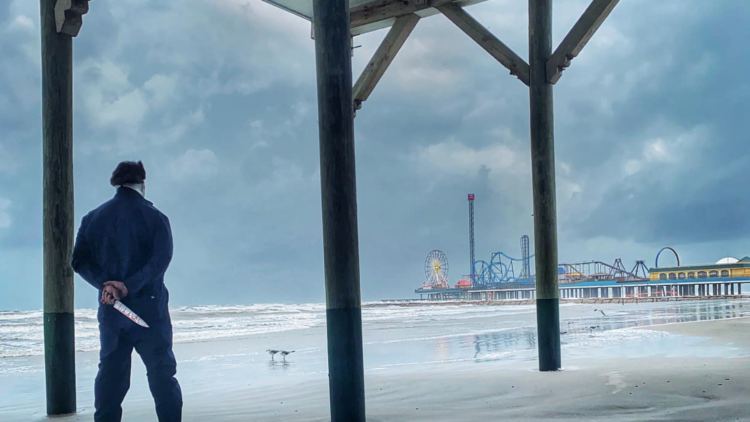 Hurricane Nicholas just touched down in Galveston, TX and washed a horror icon up on shore. Just a month out from the release of Halloween Kills, video emerged of Michael Myers taking a leisurely stroll with a butcher knife down the beach.

Michael Myers was definitely looking a little peculiar outside of the Haddonfield neighborhood. The man behind the mask turned out to be Texas-based lawyer Mark A. Metzger III, who told local news channel ABC13 that he just wanted to spread “a little bit of positivity in the gloomy doom.”

During his stroll, Metzger also just happened to come across Slayer frontman Tom Araya. The pair took a couple of photos together with Araya looking positively thrilled to be posing with the horror and metal fan. (Unfortunately, we didn’t get confirmation that Slayer would be back on tour anytime soon.)

You can see Metzger’s photos on his Facebook page. He also offered this explanation of his innocent but bizarre behavior:

“Bringing positive vibes to the gloom and doom out there, generating some laughter, helping people crack a smile, and restoring our faith in humanity through humor is 100% what I’m about. It’s all I’ve been about my entire life. My methods might not work for everyone, but I guarantee I’ll please more than I’ll piss off. #byekaren”

Horror fans have been dressing up as Myers for years, but usually confine themselves to hiding behind trees at Halloween parties. Metzger was arrested for disorderly conduct but only charged with a class C citation. But should he have even been arrested in the first place? I suppose the knife may have had something to do with it… but it was shown to be a prop. Maybe Metzger will go back to the beach when Halloween Ends hits in 2022.