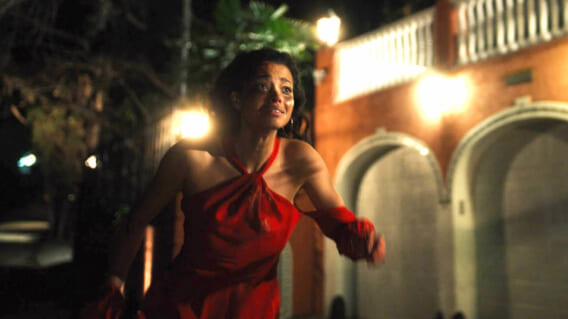 Ella Balinska appears in Run Sweetheart Run by Shana Feste, an official selection of the Midnight program at the 2020 Sundance Film Festival. Courtesy of Sundance Institute.

Ella Balinska is on the rise as a star. First impressing audiences in the 2019 Charlie’s Angels, she recently graced our screens as the lead in Netflix’s (sadly short-lived) Resident Evil franchise. Balinska imbues her characters with passion and a dash of humor no matter the subject matter. And she continues that trend in the new film Run Sweetheart Run. She plays a character on the run who must battle for her life against a seemingly unstoppable man.

Initially apprehensive when her boss insists she meets with one of his most important clients, single mom Cherie (Ella Balinska) is relieved and excited when she meets charismatic Ethan (Pilou Asbæk). The influential businessman defies expectations and sweeps Cherie off her feet. But at the end of the night, when the two are alone together, he reveals his true, violent nature. Battered and terrified, she flees for her life, beginning a relentless game of cat-and-mouse with a blood-thirsty assailant hell-bent on her utter destruction. In this edge-of-your-seat dark thriller, Cherie finds herself in the crosshairs of a conspiracy stranger and more evil than she could have ever imagined.

Dread Central spoke with Balinska about preparing emotionally for the role, the importance of these stories, and more.

Run Sweetheart Run is out now on Prime Video.