Interview: Gabriel Theis, ‘The Curse of Professor Zardonicus’, and Making A Mockumentary

We speak with director Gabriel Theis about his film, 'The Curse of Professor Zardonicus', and what it's like to make a midnight movie. 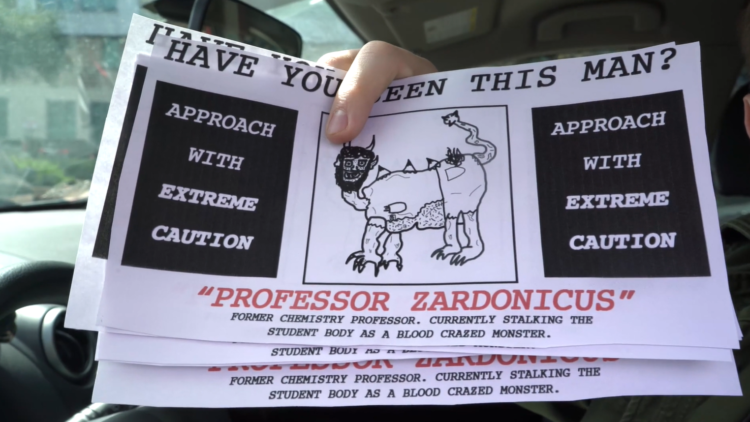 You may have not seen The Curse of Professor Zardonicus. I’d venture to say you’ve never even heard of it. It tells the story of Greg, a college filmmaker trying to figure out what to do for his film final. He happens upon Darren, a fellow student who believes in the urban legend of Professor Zardonicus, a university professor who was changed by an accident in the old science building on campus. What follows is a descent into secrets, lies, and delusions. It’s an absolute found footage joy. I recently sat down with director Gabriel Theis (who also plays Greg) to talk about the project.

Dread Central: Where did the idea for your first film, The Curse of Professor Zardonicus come from? Or I guess I should say, your first film that I’ve seen.

Gabriel Theis: The Curse of Professor Zardonicus is my directorial debut, so you’re actually correct there. So Zardonicus originally involved a simple, freeform short film that I could make with some friends, basically on the fly. I would be the “cameraman” following around one of my friends who was trying to prove that this urban legend was real. We would go to places all over campus and basically improvise these weird, funny scenarios. I’ve always found dark humor in conspiracy theorists, and the lengths people will go to in order to prove that they’re right.

But as I started writing down more and more ideas for this short, I started seeing a dramatic arc to the story. Who was this guy, trying to prove that Professor Zardonicus was real? And why was it so important to him, that he would constantly humiliate him, on camera no less?

So eventually I realized that I had a feature-length story on my hand after answering these questions and giving more dimension to these characters, the cameraman, and the main subject, Darren.

So I write the script, more or less as a spec (meaning, it was not commissioned by anyone). But after making a few short films and realizing that I had the right cast and crew, I decided to go ahead and film it myself. There probably wouldn’t be a better directorial debut for a broke college student than Zardonicus, with the mockumentary format and emphasis on character interaction.

DC: Alec White, who plays Darren opposite your character, Greg, is a very intense young man. The chemistry between you two is unmistakable. How long have you been collaborating?

GT: Alec and I had first worked together as co-stars on another student film, where we actually played each other’s boyfriends. So, we had to work together pretty well.

Alec was a star on campus, and every student filmmaker wanted to work with him, and I was no different. I cast Alec in one of my short films, where he played a director of “So Bad They’re Good” movies named Winston Kirp. That was another intensely delusional character, and while Alec played that character very differently, I could tell he knew how to bring that manic energy to a role. With no-budget movies, you have to work with people pretty closely, and really trust them. So that was another thing that led to our dynamic on-screen.

DC: So you two weren’t friends prior to doing student films?

GT: I hadn’t met him before that first film, no. But we remained friends through our collaborations.

DC: Are you still in touch?

GT: Yes, I’ve just been invited to his wedding, actually. We’re still good friends; the crew spent a lot of time together on Zardonicus.

DC: The movie is carried by the chemistry between you two, but the small supporting roles are standout in their delivery. Were these actors or just some folks you roped into putting on camera? The priest in particular delivers his lines in such a dry way. It’s a standout performance for such a bit part.

GT: The supporting cast was made up of actors, such as the priest who was a prolific stage actor at my university. I saw him on stage and he really blew me away, and this was right around the time pre-production was starting so I knew I would have to work with him.

Many of the actors were people I had worked with before. The actress who played my character’s girlfriend, Cat Thomas, had worked with me several times. She’s actually a voice actress for anime, actually.

There were a few smaller roles, such as the “students” during the montage where we explain the mythos of Professor Zardonicus, who were friends. They weren’t reading from a script, I told them as much as their character would know and let them improvise their responses.

Acting is something I really paid attention to; the performances can really make or break a mockumentary film because if the audience doesn’t trust the sincerity or authenticity of the performance, the joke is ruined before it’s even delivered.

DC: It came across as very believable. There’s actually not much in the film that would make a new viewer think that it’s not 100% genuine.

GT: That’s the fine line you have to walk. It’s funny, a lot of rock stars who watched This Is Spinal Tap, like Ozzy Osbourne, didn’t know it was fake. With mockumentaries, you have to “turn it up to 11” to again reference Spinal Tap. The satire has to be enhanced so slightly that it’s noticeable but doesn’t lose the realism of its subject matter.

DC: There is a through-line of dry comedy throughout. Was that a conscious decision? The small pauses, the “I’m so damn tired of this” facial expressions. The movie is darkly funny.

DC: For sure. So I was watching it again last night with my wife, and I said, “I don’t know if they are aware, but this is a cult classic in waiting”. How do you feel about that observation?

GT: That’s honestly the highest hope we had making it. My dream is to have this be a midnight movie and to hear people shouting the lines back at the screen.

DC: It accomplished that for sure. It’s heartfelt, funny, and a mystery. It’s a combination people will love. What I want to know, is when can readers have a copy of this in their collections?

GT: So we’re aiming for a December release, and we’re working hard to make that happen.

DC: Excellent. Any special features you want to tease?

GT: Let’s just say you’ll be able to hear our thoughts on the making of this film. A lot of stories that we’re excited to share. Making a film for only a couple thousand can be a trip.

DC: So let’s change gears. You have a new project on the horizon, yeah?

DC: Are you staying in the realm of horror, or branching out?

GT: I have many horror screenplays that I’m looking to produce, but I also have my eye on a few comedies. Horror and comedy are [the genres] I see myself going back to.

DC: At its heart, Zardonicus definitely feels like the best of both worlds when it comes to horror and comedy. It tells an excellent mystery, but with plenty of laughs.

GT: That really means a lot coming from the Dread Central clan. I read your publication all the time, and you guys are the target audience. When we were making this movie back during school, it was really the dream to have the support of the horror community.

DC: We watched it on a lark. The writers and the owner of the site, along with members of the community get together on weekends to watch movies. Zardonicus came up and we were like, sure. It ended up absolutely blowing us away.

GT: Is it what you guys expected? I’m curious to know what it’d be like going into the movie totally blind.

DC: Not at all what we expected. I’ll be honest with you Gabe, when we set out to watch movies, we’re looking for bad movies. We occasionally find absolute bangers. That’s kind of the joy of movie nights: sifting through the bad and occasionally finding good. A lot of folks said, “if you slapped an Adult Swim logo in the bottom corner, it wouldn’t be out of place.” It hit us so differently compared to other stuff. As we got further in, the jokes turned into silence and occasional comments of, “holy shit this dude knows what he’s doing, this is great!”

DC: Along with the Bad Ben series, it’s a movie night success. A mainstay. We still bring up Zardonicus as a yard stick to measure other mockumentaries against.

GT: Now, THAT’S the dream. Zardonicus was MADE for movie nights.

DC: It’s got that indie spirit that I personally love. A person saying, “I have a vision, and it’s time to put it to screen”.

GT: Indie movies are all about the spirit, man. They go to places that blockbusters can’t. They can afford to be weird and singular. It’s a space that a lot of people don’t want to leave, even when they get the chance.

I’d like to thank Gabriel for his time and his candor. You can find him on Twitter @Gabe_Theis or Instagram @gabriel.theis.16. You can of course find me on Twitter @Horrorplayed. The Curse of Professor Zardonicus will release on home media in December. We’ll keep you updated on an exact date.