‘Death Walks at Midnight’ is an Intense and Unpredictable Whodunnit [Watch] 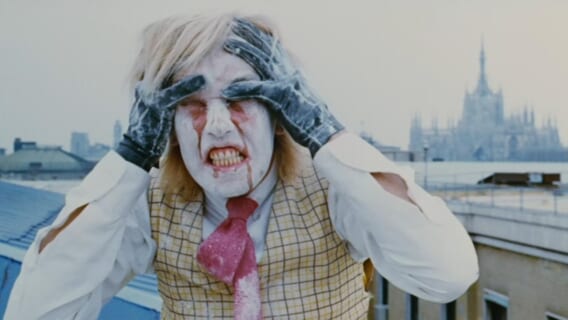 This week’s selection is a woefully under-seen murder mystery from director Luciano Ercoli. Death Walks at Midnight is a tense and unpredictable affair. In typical giallo fashion, there is a certain amount of style over substance here. But I would still argue that the central mystery is compelling, intriguing, and well-realized. Moreover, the film is likely to keep viewers guessing up until the very end.

Death Walks at Midnight follows fashion model Valentina (Nieves Navarro) as she volunteers to test an experimental drug and document the results. While under the influence of the mind-altering substance, Valentina believes she witnesses a woman being murdered with a spiked glove. But the team conducting the ‘research’ assumes she’s hallucinating and dismisses her claims.

Valentina is further dismissed upon the discovery that the ordeal she describes bears a striking similarity to a homicide from six months prior which has already been solved. From there, speculation arises that she may have previously witnessed a crime and repressed the memory, only for the details to return to the surface during the experiment. In spite of that, Valentina is insistent that she saw what she saw. Yet everyone around her dismisses her claims, believing she must be mistaken or perpetrating some form of deception.

The perpetual presence of disbelief serves to foster a sense of isolation and total vulnerability. It doesn’t matter what Valentina says she saw. No one sees merit to her claims, which leaves her entirely alone in the world and in a rather precarious position.

Valentina’s dogged determination to convince everyone around her of what she’s seen helps to shape her as a likable protagonist. She is relentlessly focused on solving the crime, in spite of the fact that absolutely no one will take her seriously. In fact, even after being accused of making a false police report and threatened with arrest, Valentina refuses to stand down.

The narrative is rarely predictable, thanks to a screenplay filled with misdirection. But it’s more than just run-of-the-mill red herrings that make Death Walks at Midnight an intriguing and unpredictable murder mystery.  To first-time viewers, one thing eventually becomes clear: nothing is what it seems.

And I do mean nothing is what it seems. In a break from giallo convention, we see the killer’s face early on. But thanks to a smartly executed script, that revelation tells us very little about what’s actually happening. The identity of the purported killer amounts to a small piece of a much larger puzzle. And trying to piece it together as the viewer is a whole lot of fun.

Along the way to the denouement, characters come under suspicion and are seemingly exonerated. But when all is revealed, viewers are likely to be shocked by the way things ultimately shake out.

Also See: ‘The Dark Red’ Is A Slow Burn With A Killer Payoff [Watch]

Narrative elements aside, the wardrobe, set design, and hairstyles are all obvious products of their time, which should please anyone fond of the groovy styling of the ‘70s. On that note, Valentina’s metallic headpiece in the club scene is absolutely next level. It’s part wig, part hat, and entirely awesome. If you dig wearable art, you’ll have to check the film out for yourself to see what I mean.

All in, Death Walks at Midnight is a thrilling ride that’s as intense as it is unpredictable. If you’re curious to check it out for yourself, you can stream the flick on Tubi for free (with ads) as of the publication of this post. And if you find that you’re a fan of the picture, the fine folks at Arrow have given it the royal treatment on physical media.