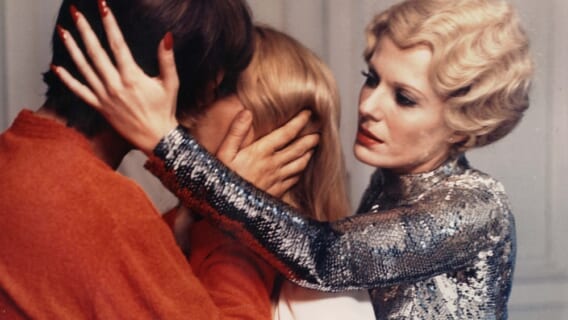 Vampires are here, they’re queer, and are ready to release you from the confines of a mundane life. And also serve looks but that’s a different story altogether.

When you think about what vampires represent it always comes back to otherness. And that tends to translate to being queer. Historically vampires have been depicted as seducers, corrupters, and menaces to society. Sound familiar? Take Dracula’s Daughter (1936) for example and how Countess Marya Zaleska (Gloria Holden) felt othered and wanted to be “normal”. After all, she was the daughter of Dracula (Bela Lugosi). Her obvious desire for women was something she didn’t want to feel. And that’s something homophobes revel in or target: that queer folks must be ashamed. That we have nothing to be proud of. Does that all mean that we’re meant to always root for vampires? No! But it’s important to understand their political nature.

Also Read: ‘The Sadness’, OCD, and The Horrors Of Intrusive Thoughts

Just like Countess Zaleska, there’s normally a struggle for characters that are embracing vampirism. If they’re not into it, they are wanting to be normal again. To go back to not being seen as a freak or an outcast in society. At times it’s also about safety because eliminating vampires isn’t just Buffy (Sarah Michelle Gellar)’s gig, alright?  The act of blending in is very applicable to some queer experiences. But in Daughters of Darkness (1971), vampirism is embraced in a different way.

In the ‘70s there was a wave of lesbian vampire horror such as The Vampire Lovers (1970) and Vampyros Lesbos (1971). One of the most iconic (or at least well-known) of them is Daughters of Darkness (1971). A dreamy film that focuses on newlyweds Valerie (Danielle Ouimet) and Stefan (John Karlen) who are traveling to see Stefan’s mother. At the hotel, they meet Countess Elizabeth Báthory (Delphine Seyrig) and her companion Ilona (Andrea Rau). Seyrig’s character is based on the real-life serial killer Elizabeth Bathory. Legends describe her as vampiric in nature as she bathed in the bath of virgins.

However, in the film, Valerie and Stefan don’t realize she’s a vampire with a sensually violent streak. Despite the violent nature of the Countess’ character, she’s the one who aids in bringing about Valerie’s sexual and overall freedom from her abusive marriage.

We’re not meant to root for Stefan because of his abusiveness towards Valerie throughout Daughters of Darkness. Though it’s important to note that there’s an underlying queerness to his character. The mother that he wants Valerie to meet is actually a gay man, with whom he implicitly had an arrangement with. Even with that information, Stefan’s identity isn’t fully explored and maybe that’s on purpose in order to focus on Valerie’s queer awakening. It may not be as explicit as her queer experience, but Stefan certainly adds to the conversation surrounding the film’s queerness.

As the movie carries on, Daughters of Darkness reminds you of the constraints of forced heteronormativity. Valerie is seen as an object to own, abuse, and treat as Stefan sees fit. It’s something that’s evident when he beats and rapes Valerie in their hotel room. He even tries to force himself on Ilona in the shower, which results in her death. There’s certainly an examination (whether intended or not) of both Stefan and the Countess as partners for Valerie. While the Countess is a vampire, Stefan is the true monster of this film. As is the heteronormative life that Valerie would be stuck in with him.

Once Valerie is enthralled by the Countess, thus embracing her queerness, she’s finally free. Free to be whoever she wants to be that isn’t defined by her husband. But in order to totally have thatm she must kill Stefan. And she does (with the help of the Countess as they both drink his blood) and tries to run away with the Countess. However, this unfortunately results in them getting into a car crash. This does kill the Countess because of impalement and an explosion.

Yet, the ending of the film essentially sees Valerie carrying on the legacy of the woman who set her free. Perhaps with her looking to seduce a couple and maybe turn them into vampires as well? Her desire to be more sexually expressive is visible in the last shot of her walking away with a man and woman. She’s not meek or desperately trying to gain anyone’s attention anymore. Valerie is now carrying herself with confidence and mysteriousness.

Daughters of Darkness came out at the right time and it’s interesting to examine it from a modern lens, especially considering the reality we live in is still not accepting of sexual expression. Queerness in particular is already hypersexualized by homophobes that see us as corrupters of children. Therefore any form of sexual expression from queer folks is seen in a different light. The shame that’s peddled within the western world is aggressive and does contribute to internalized homophobia. There are without a doubt a lot of Valeries still living in this world who are queer and want to destroy the heteronormative bubble they’re trapped in. It may not take a hot centuries-old vampire to contribute to the act of breaking free. Unless you find that for yourself and with that I bid you a lot of success.