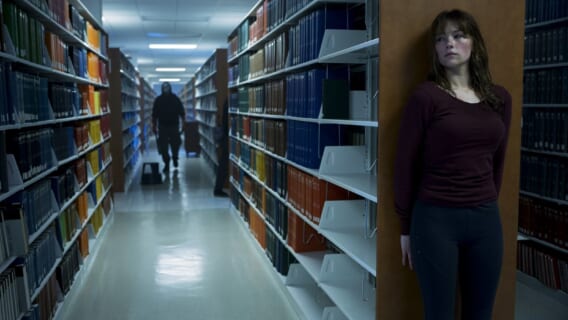 I’m pleased to be showcasing a seasonal favorite in this installment of The Overlook Motel. Today’s selection is a tense, fast-paced horror thriller with a plucky lead. I’m speaking, of course, of Olly Blackburn’s Kristy.

Kristy follows college student Justine (Haley Bennett of Swallow) as she makes the fateful decision to spend the Thanksgiving holiday alone in her dormitory. The long weekend starts out uneventful enough. But a random encounter with a sinister group lands the young woman in a full-on battle for survival.

Justine is a smartly scripted and likable protagonist. She attends a prestigious university where most of her classmates appear to have been born with a silver spoon in their mouths. But Justine comes from no such privilege. She offsets the cost of her expensive education with work study and student aid. And she remains grounded amongst her peers. As such, she’s likely to be relatable to anyone that doesn’t come from tremendous wealth.

Also See: ‘The Dark Red’ Is A Slow Burn With A Killer Payoff [The Overlook Motel]

In addition to establishing her as a grounded protagonist, Justine’s financial struggles also find her unable to afford a flight home for Thanksgiving. Instead, she is confined to her all-but-empty college campus for the long and stormy weekend. Justine’s initial plan is to spend the day eating TV dinners with her roommate, Nicole (Erica Ash). But when Nicole’s parents surprise her with a family trip to Aspen, Justine finds herself very much alone. While that sounds like a less-than-ideal way to spend the Thanksgiving holiday, it’s a brilliant setup for a horror picture. And it’s realized to profound effect here.

Kristy is dripping with atmosphere. Things get very creepy when the action ramps up. But even before that, director Olly Blackburn (Donkey Punch) utilizes subtle tricks to keep the audience on edge. In spite of being set on what we are led to believe is a prestigious college campus, Justine’s university isn’t without its fair share of dank and uninviting corners. Before any of the antagonistic characters arrive on the scene, we see her navigating the derelict basement-level laundry room with buzzing and flickering fluorescent lights. And the montage that depicts Justine roaming the campus is complete with multiple shots of her standing alone in long, abandoned corridors, driving home the message that this protagonist is essentially a sitting duck.

See Also: ‘Southbound’ is the Best Horror Anthology of the Past 10-Years [The Overlook Motel]

Matters only escalate when a trio of uninvited visitors descends upon the desolate campus. From that point on, the film becomes a series of fast-paced chase sequences that barely leave the viewer with time to catch their breath.

Another facet that adds to the film’s efficacy is the random nature of the violence to which Justine is subjected. She crosses paths with the perpetrators at a gas station and attempts to make a good-faith gesture. But her kindness is met with hostility and violence. There’s something inherently frightening about that because there’s nearly no way to avoid the type of situation in which Justine finds herself. Plan as we might, one cannot always avoid the brand of random, and unforeseen chaos that rains down upon this film’s protagonist.

As for why this essential Thanksgiving horror film remains overlooked, it’s no great mystery. The flick had a rather anticlimactic release strategy. It landed briefly on Netflix with no physical media release. While it’s now available to stream for free via YouTube, Vudu, Tubi, and FreeVee, the film still has yet to get the physical media treatment in the states. However, you can track down a copy of the film’s German DVD release, which should work on any region-free player.

That’s all for this installment. Thanks for checking in to The Overlook Motel.

Want to chat more about under-seen and underrated films? Feel free to hit me up with your thoughts on Twitter @FunWithHorror!