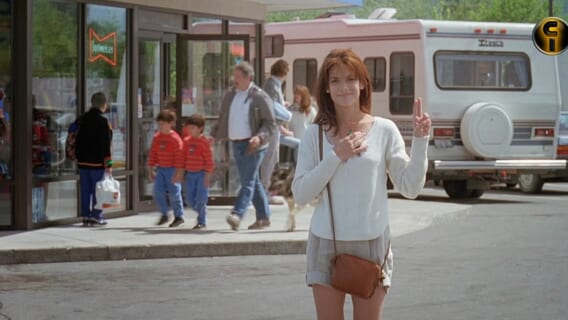 The Vanishing (1988) is pitch-perfect. Full stop. Moreover, the 1993 remake is an unnecessary reimagining. But with that said, the American redux (directed by George Sluizer, who also helmed the original) isn’t as bad as it’s often made out to be. In fact, I quite enjoy it. Now, before you think me a foolish nitwit, I ask you to afford me some time to explain my potentially unpopular opinion.

The Vanishing (1993) follows the storyline of its predecessor pretty closely, with the exception of the ending. The American version catches up with Jeff (Kiefer Sutherland) and his girlfriend Diane (Sandra Bullock) as they gear up to visit the historic landmark Mount St. Helens. During their trip, the pair run out of fuel, leading to a series of unforeseen developments. When the couple arrives at a gas station, Diane runs into the attached convenience store for some snacks. But, she vanishes without a trace. Heartbroken by Diane’s sudden disappearance and haunted by the unknown, Jeff dedicates his life to finding out what became of his former lover.

The Dutch original is a haunting portrait of love, loss, and obsession. It features stellar performances and a bleak narrative that is likely to leave the audience haunted long after the end credits roll. The American remake, though similar to its predecessor in many ways, is a decidedly different film. I think it works best when divorced from the source material and evaluated solely on its own merits. While the redux isn’t as artistically effective as that which came before it, one must give the reimagining credit for what it gets right. And I would argue that it gets enough right to be a rather enjoyable escapist thriller.

For better or worse, the reimagining takes the original setup and repackages it for a stateside audience, complete with a happy ending. In doing so, the picture becomes less artistic than its predecessor. But that’s not to say that it’s no longer enjoyable. I appreciate both versions for different reasons. The original is gourmet cuisine and the remake is comfort food. But both have their place. And there’s enough room in my world for each incarnation.

The biggest departure the redux takes from the Dutch original pertains to the role of the lead character’s new girlfriend. In the American version, her name is Rita and the part is played by Nancy Travis. In the eleventh hour, Rita intervenes and saves Jeff from the shallow grave in which he’s been buried alive by Diane’s abductor. That absolutely serves to make this reimagining less chilling than its predecessor. And the way Rita finds Jeff certainly requires the audience to suspend their disbelief a bit.

But to rehash the exact same narrative would have made this reimagining a carbon copy of that which came before it. Sure, the happy ending downgrades the film from a taut mediation on the dangerous nature of obsession to mere popcorn entertainment. But I have no qualms about that. I appreciate the existence of two different versions of the film to choose from.

Another component that makes the remake an effective effort is an impressive cast that turns in solid showings. Sutherland is impressive as a man completely consumed by that which is unknown. He convincingly conveys the sense of desperation Jeff begins to feel. Much of his pain and desperation is left unspoken but it’s written all over his face.

Additionally, Jeff Bridges is rather sinister in his turn as the sociopathic Barney. The power of his performance lies in the subtlety. He isn’t an over-the-top, scenery-chewing villain. He is exactly what a monster looks like in the real world. Barney looks and acts like one of us. He blends in because he has learned to mimic ordinary human behavior, in spite of being a complete monster.

Oscar-winner Sandra Bullock is also rather effective in her turn as Diane. She isn’t onscreen for long. But her devotion to Jeff reads as authentic. Moreover, her personality and mannerisms are well-suited to the role. Her rendition of Diane puts me in the mind of someone we may hear lovingly described by those that knew her best on an episode of Dateline. I can almost hear her friends and family saying she lit up the room when she walked in and always had a smile on her face.

All in all, The Vanishing (1993) doesn’t manage to live up to the greatness of its predecessor. But it is, nonetheless, an entertaining and suspenseful thriller that, when taken as its own entity, still has plenty to offer. It serves up solid performances and manages to be simultaneously eerie and entertaining. And sometimes, that combination really hits the spot for me.