The 10 Spiciest Controversies of the ‘Halloween’ Franchise 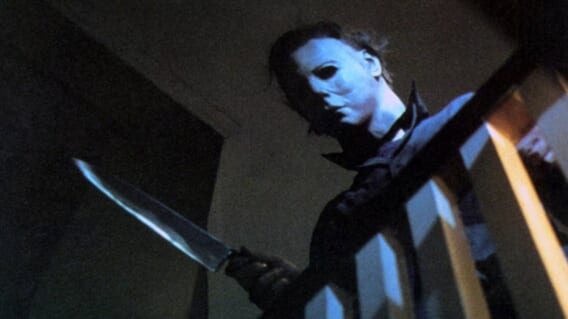 Despite the fact that the original Halloween is one of the most acclaimed slashers ever, it produced one of the most infamous horror franchises in film history. And fans love talking about the many head-scratching and even offensive choices that have been made over the seemingly endless stream of sequels and reboots.

So what better way to celebrate Halloween Ends than by looking back at all the controversial and infamous moments of the franchise? Whether baffling story directions, whiplash-inducing tonal shifts, or disastrous productions, these are the most polarizing and even detested low points of the series. These moments are ranked by how incendiary and hostile the fan reaction was at the time of release. While fans have warmed up or even embraced some of the installments listed below, the poor reception of the time proved to be a serious seismic shift for the franchise.

One of the most anticipated horror flicks of recent memory, David Gordon Green’s Halloween was hyped as being the “true” sequel to the original. It wiped away all previous installments after the first, after all. Some fans who dismissed the previous sequels welcomed this new timeline. But, other fans were disappointed to see that fan-favorite installments like Halloween II and Halloween 4 would be totally ignored.

After all, there were so many storylines and characters that didn’t get a proper resolution throughout the franchise. Fans are still clamoring to see the return of Danielle Harris as Jamie Lloyd. While Halloween (2018) was still a major hit, it’s not hard to find people who still miss the previous storylines of past sequels.

John Carpenter famously never wanted his original Halloween to be given a sequel. But he begrudgingly agreed to write and produce a follow-up in order to get The Fog off the ground. By his own admission, Carpenter didn’t know where to take the characters. So he resorted to a twist that was scoffed at by the critics at the time.

In the final act of Halloween II, Dr. Loomis learns that Laurie Strode was actually the biological sister of Michael Myers. That’s why he went after her in the original film. Many fans prefer to keep Michael motiveless and didn’t need any additional backstory. Other fans just didn’t appreciate how desperate of a twist this was, and how it retroactively made the original so contrived. What kind of a coincidence is it that Laurie, the estranged sibling of Michael Myers, dropped off the keys to the Myers house on Halloween Eve? While fans have obviously warmed up to this since the release of Halloween II, there’s a reason why so many Halloween enthusiasts were ecstatic when it was announced that David Gordon Green would not be using the twist for his legacy sequel.

Halloween: H20 is one of the more celebrated sequels of the franchise, mostly thanks to the return of Jamie Lee Curtis. But, diehard fans have never been particularly impressed with H20’s interpretation of Michael Myers. To make matters worse, Michael wears not one mask but four, each cheaper and more awkward than the last. That situation was thanks to a confused production where the filmmakers and producers couldn’t get on the same page as to which mask should be used.

While Michael has seen his fair share of lackluster masks through the sequels, H20 had a healthy budget and far superior production value than most films of the series. So that makes the mask situation sting all the worse, particularly with the inexcusable CGI mask that gets used for one scene. I’ll grant you, that’s the stuff of nightmares right there.

7. Michael: Portrait of a Serial Killer

After directing cult grindhouse hits with House of 1000 Corpses and The Devil’s Rejects, fans were curious to see what rockstar-turned-auteur Rob Zombie would bring to the table with his remake of Halloween. But to the ire of many, he brought his same ultra-white-trash sensibilities to the famously austere franchise and turned Michael Myers into the product of a broken home.

Some fans were furious enough that Zombie even gave Michael an origin story, given that series creator John Carpenter never wanted the audience to identify with the character. Even though some respect the fact that Zombie put his stamp on the franchise, many fans will never forgive him for indulging in his own stylistic comfort zone and not honoring the original intention.

When you’re making the sixth movie in a franchise, especially one as simplistic and formulaic as Halloween, you need to start thinking out of the box to keep things fresh. That being said, the people behind Halloween: The Curse of Michael Myers took the series in a direction that was so jarring and out-of-left-field that it stopped feeling like a Halloween sequel and more like a weird Celtic-oriented cult movie with Michael Myers lumbering in the background.

Essentially, The Curse of Michael Myers reveals that Michael is actually the pawn of a cult, the Cult of Thorn. Its members instruct him to kill off a member of his family every Halloween in order to complete a sacrificial ritual. Oh, so THAT’S why Michael is trying to kill his relatives? And here we were, thinking that Michael was just a serial killer.

The Cult of Thorn has its defenders. This is especially since the release of the original Producer’s Cut, which is more tonally consistent with the original Halloween and frankly more coherent. Even that can’t ultimately save Halloween 6’s reputation. It convoluted the Halloween mythos so completely that the producers opted to just reboot the franchise with H20. At least Halloween 6 still managed to give us Paul Rudd as Tommy Doyle.

As far as Halloween fans are concerned, there’s no shortage of controversies about Halloween: Resurrection, the most despised entry of the franchise. From Busta Rhymes to Reality TV, Resurrection just makes misstep after misstep. But possibly the worst sin it commits is to completely ruin the ending of H20, which is generally regarded as having one of the best finales of the series.

It famously ends with Laurie Strode finally trapping Michael Myers before chopping off his head with an axe. How could they make a sequel after that? Rather simple, really. Just retroactively explain that Laurie didn’t cut off Michael’s head, but that of a paramedic who Michael swapped clothes with. Resurrection completely undermines the emotional impact of its predecessor all in the name of serving one of the most cynical and laziest slasher flicks of the aughts.

4. White Horses Couldn’t Drag Me Away

Even for Rob Zombie defends such as myself, this one is hard to defend. After the commercial success of his original Halloween, Rob Zombie came back to make a sequel on the promise that he would have total creative control. The result was a sequel with grungier cinematography, more vile and profane characters, and… a white horse?

For this sequel, Zombie chose to take a more surreal approach and injected it with bizarre, cerebral imagery in order to further explore the psyche of Michael Myers. While H2 is being appreciated by some fans (including yours truly) as being one of the more unique and thematic sequels of the franchise, the white horse still serves as the elephant in the room whenever this oft-maligned sequel comes up.

3. The Killing of Jamie Lloyd

As previously mentioned, Halloween diehards are still hoping for the return of Danielle Harris to the role of Jamie Lloyd, Michael Myer’s niece who served as the protagonist of 4 & 5. One reason why fans miss her so badly is that the character was given such an unceremonious and, some would say, insulting exit from the series.

After being terrorized by her uncle for two installments, a recast Jamie Lloyd is violently killed by The Shape after having been held captive by the Cult of Thorn. And in the Producer’s Cut, she’s even raped by Myers and forced to have his child. Combined with the fact that Danielle Harris couldn’t return to the role because the producers wouldn’t match her salary, you have one of the most mean-spirited and disrespectful deaths in slasher history. Fans miss seeing Danielle Harris so much that Rob Zombie actually cast her as Annie Brackett in his reboots. Still, fans deserve to see a proper resolution to Jamie’s story, and Danielle Harris is clearly game to return. Make it happen.

This list could probably just be filled by stuff from Resurrections. But the most infamous moment in the entire franchise has to be when a miscast Busta Rhymes kicks Michael Myers out a window. Michael Myers. The Shape. The ultimate evil. And he’s being slapped around by Busta Rhymes.

While nobody can blame Busta for wanting to be in the movie, or for how much fun he seems to be having, every Halloween’s fan jaw dropped when they saw that scene. And that’s only the most egregious moment; Busta Rhymes’s presence just cheapens the entire picture. Perhaps if he were used sparingly, that’d be one thing. But he becomes the star of the show and even overshadows Michael Myers. After this, it’s no wonder why the franchise would be rebooted.

Again, this list is ranked by those moments and decisions that were most controversial at the time. So even though Halloween 3: Season of the Witch has become a bonafide cult classic, there’s no denying the fact that it was a failure upon release that trapped the franchise in an endless loop of Michael Myers stab-a-thons.

And the reason that Season of the Witch failed so miserably at the time is simply the fact that Michael Myers didn’t return. In fact, it has nothing to do with the storyline from the original whatsoever. Instead, Carpenter and company wanted to turn the franchise into an anthology series, underestimating just how integral Michael had become to the franchise. While you can’t be surprised that audiences didn’t want to see a Halloween sequel without their favorite William Shatner cosplayer, it’s still comforting to know that Season of the Witch has risen in stature to be one of the most fondly appreciated sequels in the franchise. The tides have turned so much in its favor that Blumhouse paid homage to the black-sheep sequel in Halloween Kills. Still, there’s no escaping the fact that Season of the Witch was one of the most contested and even detested sequels in horror-movie history.