Hiking has never seemed so terrifying. 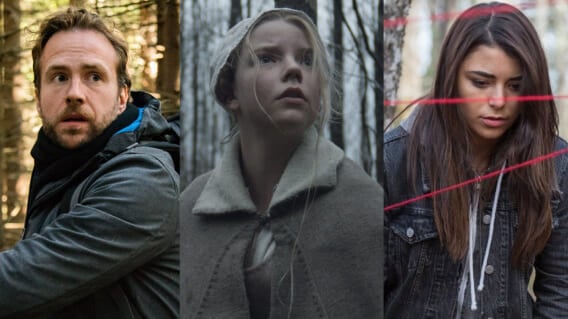 September 22 marks the official first day of autumn. A chill is creeping into the air, the leaves are starting to fall from the trees, and the atmosphere is turning downright spooky. Even if temperatures are still summer-like where you live, you can still occupy that state of mind. Might I suggest a hike in the woods? With the beautiful Fall colors spreading through the trees, some time in nature will get you thinking autumnal thoughts. But be careful; you don’t want to stumble too far into those woods. Who knows what lurks in those deceptively beautiful trees?

To celebrate the return of Fall and get you into the spooky spirit, we’ve compiled a list of ten of horror’s scariest films that take place deep in the woods. Nothing is quite scarier than nature and the beings that claim it as their home, after all.

Daniel Myrick and Eduardo Sanchez’s 1999 found footage phenomenon The Blair Witch Project is the ultimate lost-in-the-woods horror movie. And it’s got impeccable autumn vibes. Three documentary filmmakers wander into the woods of Burkittsville, Maryland in hopes of finding out the truth about the legend of the Blair Witch. But these woods are tricky and ensnare its unsuspecting victims with some of the most terrifying scares in horror history.

The Witch, or The VVitch if you’re nasty, put director Robert Eggers on the map. Plus it features an incredible performance from Anya Taylor-Joy. The film takes place in 1630s America where a family is banished for their extreme Puritanical beliefs. They take to the woods and try to start a new life on the edge of a menacing forest. But a sinister witch is watching and waiting to make their lives a living hell.

A group of friends going on a hike in Sweden to recalibrate after a tragedy get more than they reckoned for. They traipse through the strange woods, experiencing hallucinations about their past. The deeper they get into the forest, the stranger everything becomes. It culminates in a creature reveal that rocks us to our core. The misty woods and crunching of the leaves give big autumn vibes. Director David Bruckner just doesn’t miss.

This underseen found footage gem is a pseudo-documentary about a piece of literal found footage. The two stories revolve around the existence of an urban legend Peeping Tom. He’s summoned by going into the Maryland woods and standing at the end of an abandoned railroad tunnel. There, you stare without blinking for one hour. Then, he’ll appear and get closer and closer each time you blink. A filmmaker finds the footage of a college student who is making a documentary on the legend. He aims to figure out if the footage is real and if the urban legend isn’t just a legend after all.

Sometimes a first date evolves from a walk on the beach to a camping trip in supposedly haunted woods. Hailey and Danny are smitten from the first moment they meet and decide, why end the date now? Let’s go camping in the strange woods for fun! As they hike miles to the ruins of an old church, the vibes start to change. Crone Wood is a twisty, witchy film that’ll keep you on your toes. If you love folk horror AND found footage, this is the one for you.

As someone who lives right outside of Washington, DC and has OCD, Leaving DC hits hard. The found footage film follows a man with OCD who leaves the hustle and bustle of the city for the woods of West Virginia. He buys a house for dirt cheap and uses his free time to explore the surrounding woods, where he finds a strange effigy of some sort with an animal skull. As night falls, strange sounds come from the forest. So, he sets up trail cams and mics to capture the phenomenon. You may rethink that autumn cabin-in-the-woods trip after this one.

Sam Raimi’s The Evil Dead is the quintessential haunted cabin in the woods film. So it’s incredible that he one-upped himself with the sequel, which is a comedic reworking of the original with more blood, goofs, and Bruce Campbell hamming it up on screen. After traveling deep into the woods for a weekend of fun, a group of young adults uncovers a strange book. When they, stupidly, read out of it, they summon a demonic force that wants to destroy humanity.

This wouldn’t be an autumn woods list without at least one Bigfoot mention. Bobcat Goldthwaite’s Willow Creek is one of the best films about the cryptid. Plus it’s found footage! A couple goes to the remote town of Willow Creek in the Pacific Northwest where the notorious Patterson-Gimlin footage was filmed. Goldthwaite balances an air of reality with a shocking conclusion that’ll make you scared to go camping ever again.

Please, I beg of you, watch Pyewacket. It screams autumn with its crackling leaves, occultism, uneducated baby witches, and a secluded house in the woods. After the death of her father, Leah’s mom makes her relocate to a house in the middle of the woods. Out of anger, Leah heads into the forest to perform a ritual to summon a demon to kill her mother. But, naively, she doesn’t think it’s really going to work. Well, surprise, something’s unleashed and she must try to figure out how she can stop the malevolent entity.

Tim Burton’s Sleepy Hollow is perhaps one of the most autumn-vibes movies out there. The neurotic Ichabod Crane travels to the tiny town of Sleepy Hollow to investigate a series of murders. The villagers believe it’s the headless horsemen coming to collect. Tucked deep in the forest, mist swirls around feet, and leaves swirl around during horseback rides through the dark woods. This is a must-watch if you’re looking to get in the autumnal spirit.