Don’t Be Afraid of the Dark (1973) Delivers Thrills, Chills, and Creepy Creatures [Watch]

John Newland’s televised tale of terror is intense and makes the most of a modest budget. 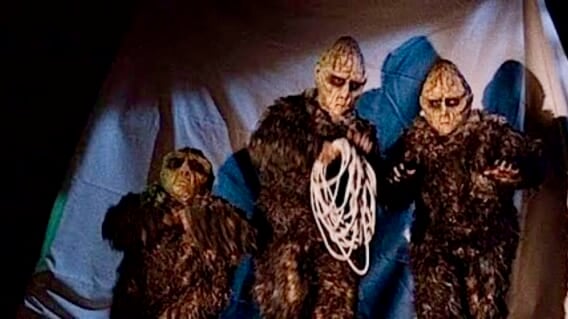 This week, I am pleased to be looking back on one of the scariest made-for-TV horror films of the 20th century. Of course, I am talking about the 1973 chiller, Don’t be Afraid of the Dark. It’s an effective example of top-notch terror on a modest budget. There aren’t a lot of flashy effects sequences and much of the action unfolds in a single location. Yet, it manages to be a frightening and effective chiller in spite of budgetary limitations.

The picture follows Sally (Kim Darby) and her husband Alex (Jim Hutton) as they take up residence in an estate Sally inherited from her grandmother. The pair begin renovating the domicile to their specifications; and everything appears to be going well at the onset of construction. But matters take a dark turn when Sally decides to repurpose a room that’s deliberately shuttered and blocked off from the rest of the house. Following that fateful decision, Alex and Sally come to learn that some doors are best left closed. Particularly when said door is in place to entrap a gaggle of malevolent, pint-sized creatures of a supernatural nature.

The estate Sally and Alex move into functions something like an additional character with an arc of its own. It’s a palatial estate that initially seems inviting. But as matters escalate, the home becomes more and more ominous. This is especially evident in the nighttime shots, which frame the dwelling to look isolated and foreboding.

The tension inherent to the narrative is augmented by the bumps in the road Alex and Sally endure in their marriage. As Sally becomes further disconnected from Alex, the relationship dynamic takes its toll on her wellbeing, leaving her frazzled and questioning her own experience. Accordingly, Sally is largely without an ally. Even her closest friend (initially) questions the validity of her claim that something evil is lurking in her home. That sense of isolation serves to make her experience all the more unnerving to watch.

Director John Newland further ratchets up the tension by taking the ‘less is more’ approach. We see very little of the malevolent creatures that are running amok until the final 15 minutes of the film. And that results in a far more horrifying viewing experience than if we were inundated by their presence throughout. When we eventually get a closer look at the monsters, they are eerily rendered and quite unique looking. Their long, tiny fingers and shriveled, prune-like faces are pretty horrifying.

Furthering the notion that less is more, there is a deliberate lack of context provided regarding why the creatures exist or what function they serve. That gives the audience the opportunity to draw their own conclusions, the result of which is often far more frightening.

Shifting gears, a bit, I want to take a moment to discuss the ending. It is far darker than I was expecting it to be. Particularly considering the time period which the flick was released. It’s even more impressive when taking into account that Don’t be Afraid of the Dark was a made-for-television film.

So, while I suspect you may have seen the somewhat poorly-received 2010 remake of Don’t Be Afraid of the Dark, the original remains largely under-seen by contemporary audiences. If you’re keen to check it out, the film is available as a digital download or rental. It’s also physically available via the Warner Archive Collection.

If you’re a fan of under-seen cinema and are keen to chat more, you can find me on Twitter: @FunWithHorror.