This made-for-TV horror-thriller is highly effective, in spite of its meager budget. 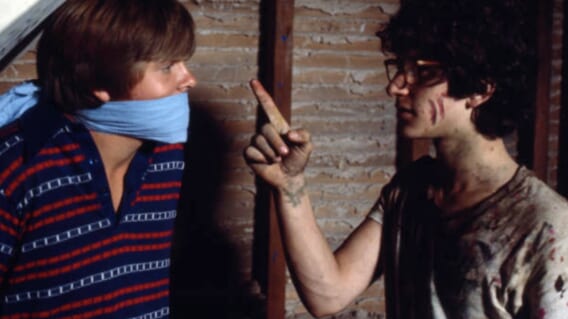 This week, I am shining the spotlight on the all-but-forgotten made-for-TV movie Bad Ronald. I look at Bad Ronald as an early example of low-budget filmmaking done right. Director Buzz Kulik doesn’t need a lot of flashy set pieces or elaborate effects sequences to appeal to his audience. Instead, he focuses on building atmosphere and creating a mounting sense of dread that continues to build throughout the picture’s breezy runtime.

The film follows Ronald WIlby (Scott Jacoby), a young man whose classmates taunt him and make cruel jokes at his expense. His only ally in the world is his tragically overbearing mother. So, when Ronald accidentally kills a young girl, he goes along with his mom’s suggestion that he hide between the walls of their home until further notice. When Ronald’s mother passes away, following a visit to the hospital, the home sells. But Ronald continues to live between the walls, spying on the new family as he loses his grip on reality. Lying in wait, he eventually begins to fixate on one of the home’s occupants, leading to a tense and harrowing showdown.

Bad Ronald largely succeeds on the strength of its lead character. Scott Jacoby (Return to Horror High) gives a layered performance in his turn as Ronald. He brings the character to life in a sympathetic manner that helps us see Ronald as a victim of circumstance. And that’s of paramount importance, seeing as how the picture unfolds primarily from Ronald’s perspective.

Related Post: 9 Made-for-TV Horror Films That are Far Better Than They Should be

Ronald isn’t evil in the conventional sense. He desperately wants to make his mother happy. And she preys on his devotion and uses it to control him. In that sense, Ronald is something of an antihero. The dynamic with his mother makes it easy to understand why Ronald is the way he is. It’s clear she has contributed to her son’s awkward and uneasy nature by isolating him from the outside world. Accordingly, the other children don’t like him. And that sees him running back into the arms of his mother. On some level, conscious or not, that’s exactly what she wants. So, when Ronald suggests turning himself in, his mom uses her influence over her son to keep him from coming forward. The idea that he wanted to do the right thing makes him far more palatable than if he were the cold and calculating type.

I will admit that making Ronald the lead character is a bit unorthodox but it works to great effect. I find myself feeling ill at ease for the family Ronald is spying on. But I feel even more unsettled knowing that Ronald might be found out at any moment. The idea that he is in constant danger, combined with the claustrophobic unease which comes from the lead character living in a crawlspace serves to amplify the tension. It’s quite literally as if the walls are closing in on the young man.

Ultimately, Bad Ronald is an atmospheric and spooky offering. The idea of moving into a home with a killer living inside the walls is pure nightmare fuel. Although this made-for-television film can be a bit rough around the edges, it gets plenty right and manages to be genuinely creepy, in spite of budgetary constraints.

As of the publication of this post, Bad Ronald is available to purchase on DVD and Blu-ray via the Warner Archive Collection.